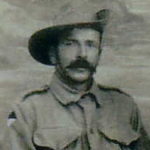 One-sixth of Australia’s total pre-World War I population of 5 million was killed in action or wounded in the Middle East battles at Egypt or Gallipoli, in France or Belgium at Messines, Polygon Wood, Passchendaele. Survivors of these battles were discharged, repatriated to Australia, expected to take up their lives after what is today acknowledged as the most brutal war in living memory. Some managed to resume their pre-war lives, despite old wounds, amputations, painful memories of loss and sacrifice; … END_OF_DOCUMENT_TOKEN_TO_BE_REPLACED