Queensland Day celebrations are part of Queensland Week, which focuses on the state’s history and development, the people of Queensland, and their achievements.

It commemorates the day Queen Victoria signed documents granting Queensland the right to its own representative government. Queensland was a self-governing colony from 1859 to 1900, and became one of Australia’s founding states on January 1, 1901 on Federation.

Queensland Day has officially been celebrated since 1981.

In 2009 as part of the Q150 celebrations the government released some files which are wonderful for family historians for some social context.

You can download the file as a complete Excel file or as individual files.

From these statistics we can see that a male born in Queensland in 1881 had a life expectancy of 41.3 years while if born in 2005 he would have a life expectancy of 78.9 years. Certainly there were some people who lived to a good age in the 1880s but as there was high child mortality it skews the figures and decreases the average life expectancy.

The population by country/region of birth 1861 – 2006 also makes interesting reading. At least they did do something with the data of all those censuses they destroyed!

Another great site for Queensland research is Text Queensland 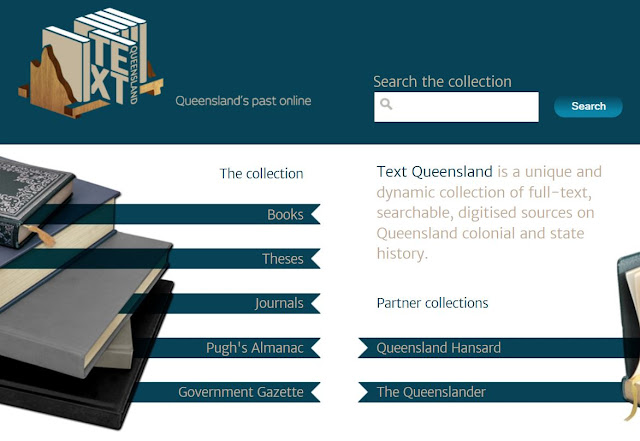 You also have to look at Judy Webster’s Pages if you do any Queensland research. Judy is a well known genealogist and professional researcher who has specialised in Queensland Archives research for many years. She has also done a huge amount of indexing over those years and shares many of those indexes with us on her pages There are more than 135 pages of indexes and information freely available for you. Judy has provided a search facility so you can see if your ancestor is mentioned among the more than 53 000 names indexed on her pages. Judy also writes some blogs and her posts on her Queensland Genealogy blog are a must read as she highlights interesting and unusual sources she has found.

Trove of course is well known to us all and many happy hours have been spent looking at the site from newspapers, photos, maps and so much more. Do you go back and redo searches for your names? You should!

New papers are being digitised and often one paper might report something and give a little more information that another. Shauna Hicks, another well known genealogist, has had great success with this as she found a sketch of one of her ancestors in the newspaper. The person was appearing in court. Now this paper has not yet been digitised. It is important to remember that although a number of papers have been digitised not all are available online. Many are available however at the State library on microfilm; there are also some specialist papers that are only available in hardcopy so it is important to look at the State Library catalogue. The State Library also has a number of online resources available too so make sure you explore their website and not just the catalogue!

The Telegraph is one of the papers that has been recently released so definitely go back and rerun some of those searches!

Queensland State Archives is another fantastic resource and their website has increasingly more indexes becoming available. Did you know that you can download their indexes as either PDFs or as CSV files?

Their immigration indexes are also an amazing resource as they are hyperlinked and so allow you to download the passenger list for your voyage. Their catalogue is good and increasingly there are items down to named level. Realistically the items that are down to name level are only a very small percentage of their over 50 kilometres of records on the shelves but great when you find one. They have made their research guides available on their website so you can learn about the records and how to access them before your next visit.


8th June is a Public Holiday this year so this weekend would be a great time to have a look at these resources and see how they could help you in your research.

It is a great time to be doing Queensland research and there are so many other wonderful resources both online and offline.

Why not leave a message and share with us a fantastic Queensland resource that you have found.