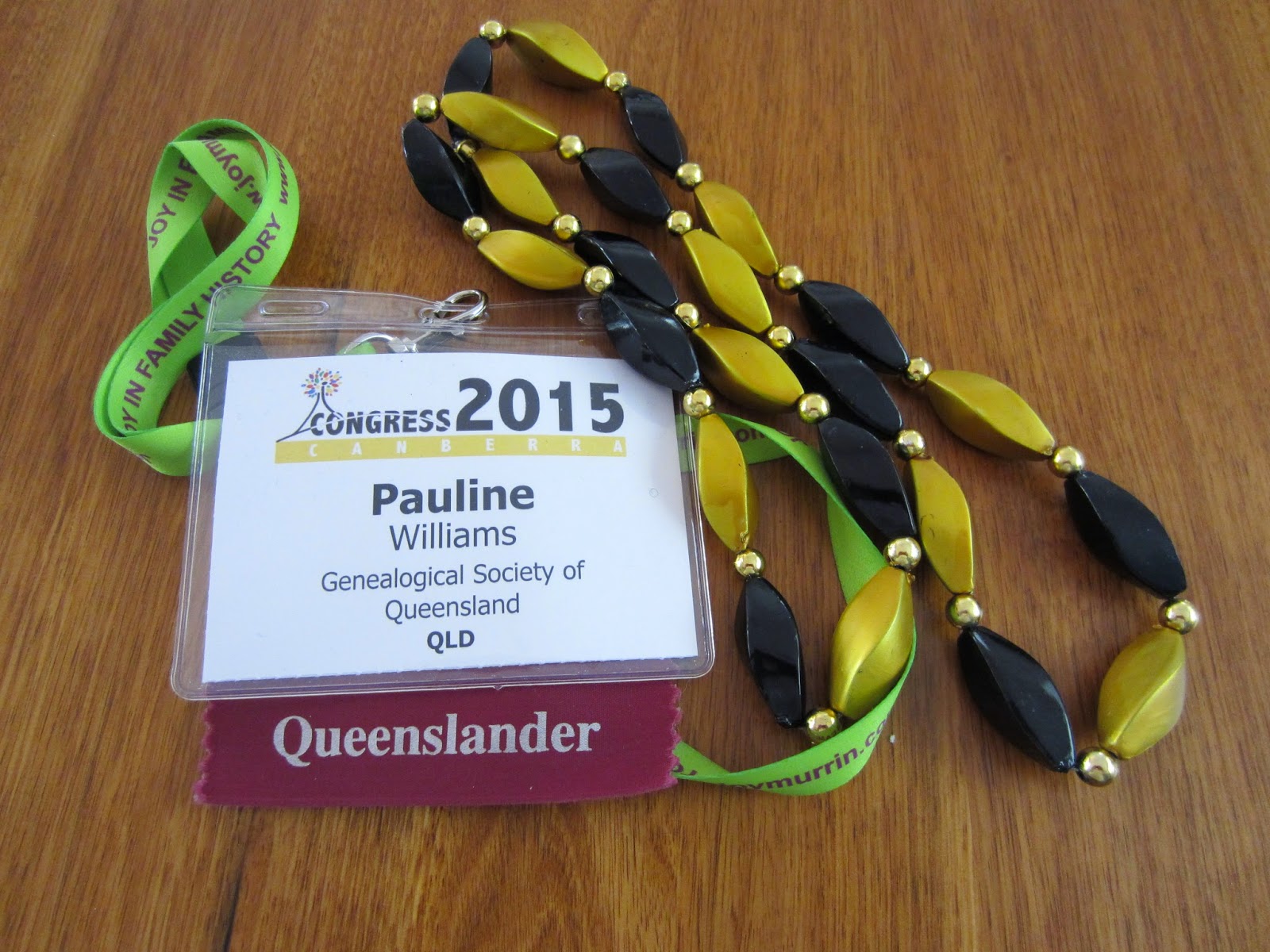 I had originally thought that this post would be solely about my experiences at Congress 2015, but the more I thought about my visit, the more I realised that my short stay in Canberra was so much more than attending Congress. Don’t get me wrong, Congress was terrific, the sessions I attended were valuable and I learnt a lot. The venue and catering were excellent and I enjoyed chatting to a wide range of people. My thanks go to Jill Ball (http://geniaus.blogspot.com.au/) for beading me up with black and gold blogger beads, and to Pauleen Cass (https://cassmob.wordpress.com/) for including me in the select, and identifiable, group of Queenslanders.
The Congress started on Thursday evening, 26 March, with a welcome event at the Australian War Memorial. My travel companion, Janice, and I decided to go down earlier in the week so we could do some research. Hang on, I can hear you say. You’re from England, what on earth can you be looking for in Canberra. For starters I wanted to find my original immigration record and also my citizenship papers. I had been meaning to do this for some years, but never got around to it. I had also volunteered to help a regular Wednesday visitor to GSQ (Julie) by checking out a couple of books at the National Library to find references to her grandfather. I was keen to visit the Australian War Memorial to see the WW1 displays and, while there, to look for references to a friend’s great-uncle, who had died at Fromelles.
Trudging through the wind and rain on Tuesday morning, we arrived in fairly soggy condition at the National Library. The Librarians were so helpful and in less than an hour I had three books to read – the two originally identified and a third, “which might be of interest”. This is why going to the source can be exciting and help you to expand your knowledge base. By the way, I had originally identified the location of these books, Australia-wide, through Trove.  The books concerned Lark Force, 2/22nd Battalion. This was stationed in Rabaul in 1942 and many died when the town was captured by the Japanese. Many others were captured and shipped as prisoners of war, together with civilian prisoners, on the Montevideo Maru, destined for Hainan. As WW2 historians would probably know, the ship was torpedoed by a US submarine, USS Sturgeon, with loss of all lives, Julie’s grandfather included. Some Lark Force members managed to escape capture, however, and make their way back to Australia; one of the books was the diary of a soldier who did just that. I found several references to Julie’s grandfather, including photos, and took copies. The books (Carl Johnson, Little Hell and the diary of Jack Moyle) give a graphic account of the experiences of those caught up in the capture and escape from Rabaul. The third book, by the way, told the story of the Battalion band, which comprised Salvation Army members from across Melbourne. Very few returned to Australia.
On Wednesday, we unlocked the mysteries of Canberra’s bus system to travel to the National Archives. I have visited the National Archives at Kew in England many times, and so I was surprised when I first saw the Australian National Archives – it wasn’t what I expected. Apart from the different architectural styles of the two buildings, many records are kept in various repositories in and around Canberra and in other state capitals, whereas most are on-site in Kew. Retrieval times can vary significantly. In response to my query about my immigration and citizenship files, I was advised that it had been dealt with the previous Friday and a letter was on its way to me in Brisbane. Not very helpful, but at least a response. It did appear, however, that the response only dealt with immigration and not citizenship. The archivist saw there was a file with a Q number in Brisbane and kindly referred my query through. As an aside, I’ve since been contacted by the Queensland Office and have actually received my citizenship documents. The major lesson (re)learned from this visit was to plan ahead, and send in file requisition forms at least a week ahead of time, to ensure you maximise your time when actually at the archives. 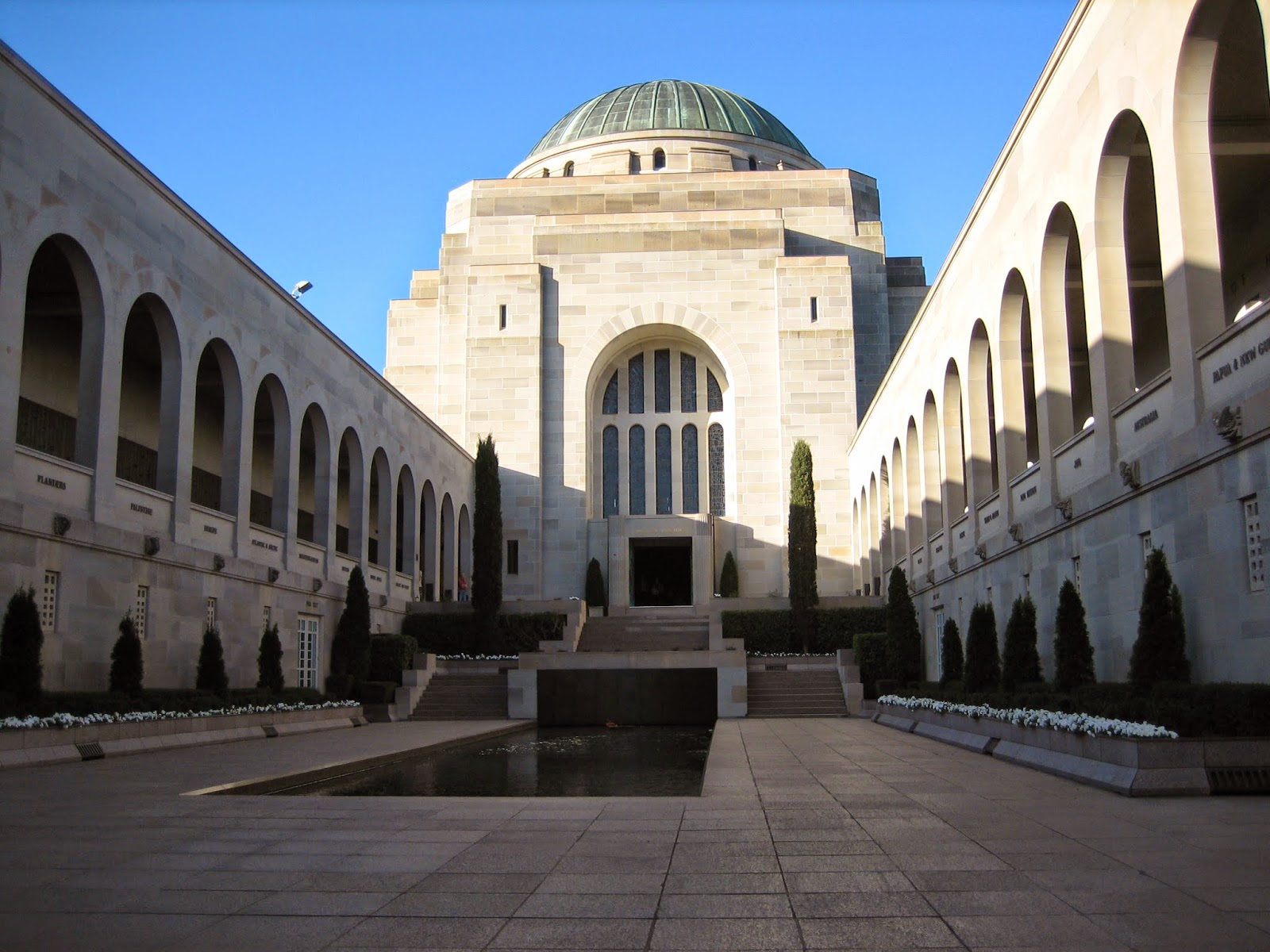 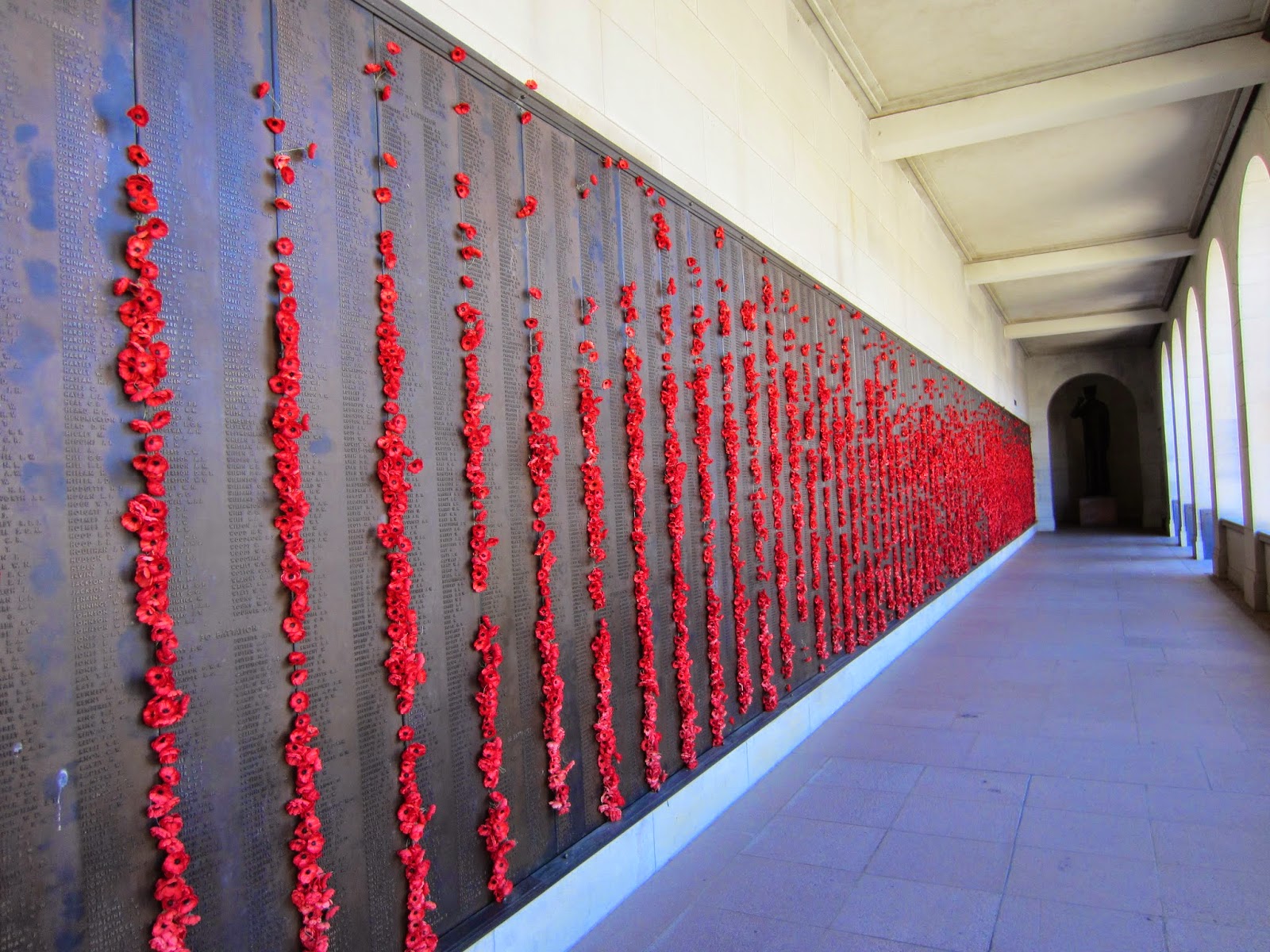 The third repository we visited was the Australian War Memorial. As most visitors would realise, there are plaques along the walls listing all those who lost their lives in various conflicts. The commemorative plaques are full of poppies. I hadn’t realised that the names were listed by Battalion and I didn’t know the details for my friend’s great-uncle George. However, the helpful staff looked up the details on their database and printed out the relevant information for me. Not only did it give the specific plaque, but I also received a print-out of the form completed by his mother as next-of-kin, which provided more information about him. George was one of the soldiers found at Fromelles, who was identified through DNA analysis.
The topic of this post was “going to the source”. My experiences in Canberra demonstrated the value of doing just that. While so much material is now available online, the staff at these, and many other repositories and societies, can help you to find material which is not yet online, can help with interpretation and, in my experience, staff are unfailingly helpful and pleasant.
So, as well as attending Congress, I had a really productive and enjoyable week in Canberra. Now, what can I look for in Sydney? I have three years to work that out!
Pauline