Whoever would have thought that the origins of a young servant girl arriving as a free passenger in 1823 would be revealed within the records of Sydney and Darlinghurst Gaol?  The quest for  Hannah Lee’s background commenced with John Daley, an Irish convict, who arrived in Port Jackson on the Brampton, 22 April 1823.  Originating in King’s County/Offaly, the 25-year-old was tried under the Insurrection Act for forcibly stealing arms from John Cooper’s farm, near the Grand Canal at Ballybritton, during a Whiteboy affray.  He, and his co-conspirator, James Fyans, faced trial at Phillipstown Assizes, receiving death sentences ultimately reprieved to transportation across the seas.  On arrival, Daley, a baker by trade, was assigned to Michael Joyce, also from King’s County. Joyce arrived on the Providence  1811, and although originally a chandler, he had set up a bakery in Kent Street Sydney.  During the 1820s he employed several convict mechanics to bake the loaves.  On 8 April 1825 the Reverend J.J. Therry married John Daley and Hannah Lee at St Mary’s Roman Catholic Church, Sydney.

In the listing submitted by Rev’d Therry to the Governor when requesting Permission to Marry, the names of John Daley, convict, ship Brampton and Hannah Lee, convict, ship Woodman were included.[1] This letter remains the only record nominating Hannah’s arrival in NSW on this vessel although this misleading information subsequently was transcribed on cards at the Society of Australian Genealogists and has been incorrectly accepted by other researchers and in on-line indexes. On Therry’s record the women entered both before and after Hannah were Woodman voyagers so possibly, quite accidentally, his ‘ditto’ marks included all the brides. Hannah Lee’s name definitely was not on the Woodman’s indent which, arriving just two months after the Brampton, made only one voyage to NSW.

The inaccuracy of Father Therry’s record was further demonstrated by three other documents, all verifying Hannah’s free status as listed in the NSW 1828 Census entry. 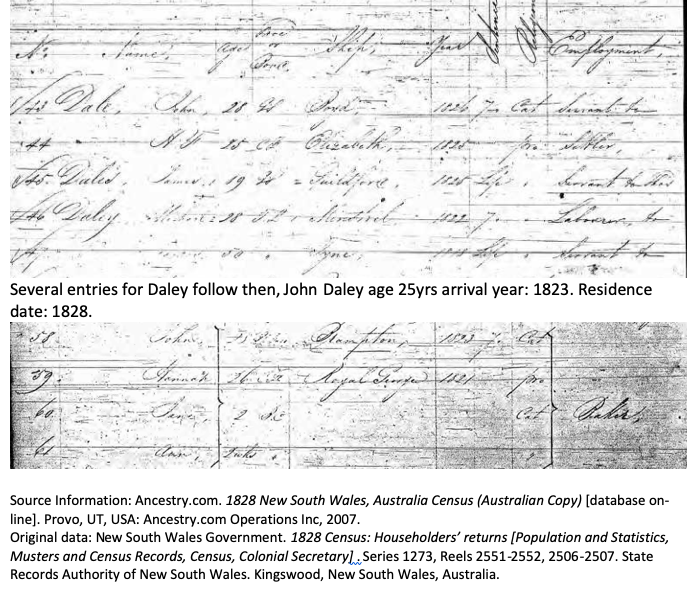 Here Hannah also confirmed that she was Protestant despite being married and having her children baptised in the Catholic Church. When applying for her husband’s assignment, Hannah reported:
That your Petitioner came out free to this Colony in the Ship Royal George in the service of Mr Acres.[2]

Additionally, the supporting notation by Michael Joyce, Daley’s employer, recorded:
…And he has lately married a free woman. 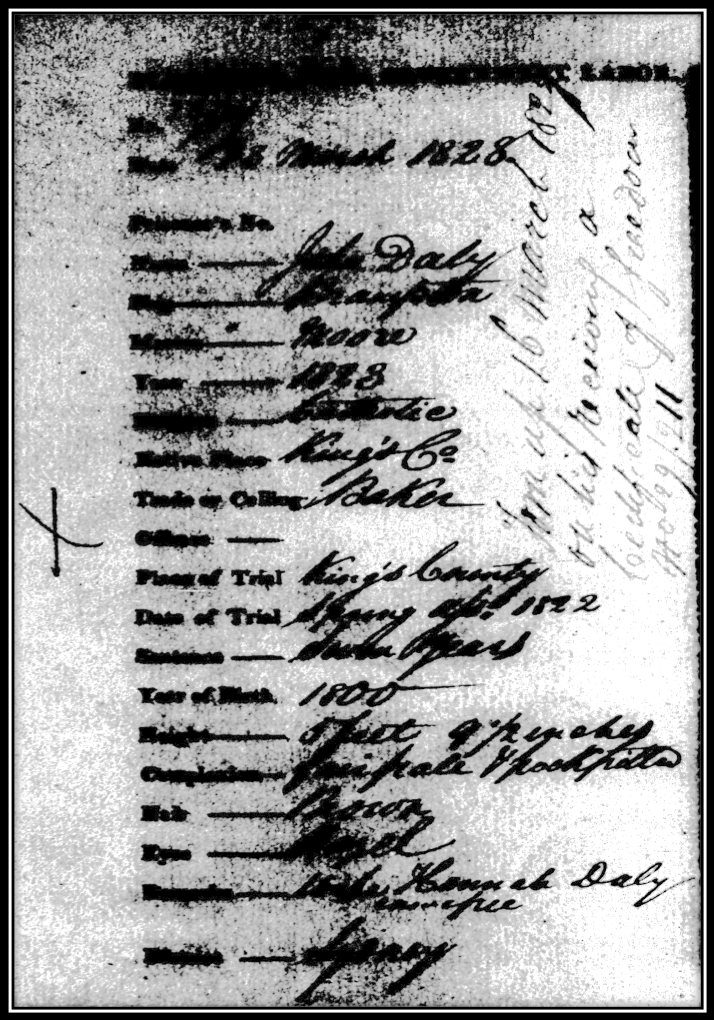 Young single girls arriving free were not numerous in the early 1820s and with no mention of Hannah’s parentage within the colony, the ship’s records appeared the first place to look. In 1821, not commissioned as a convict transport, few Royal George references exist at NSW State Records but J.S. Cumpston in his Shipping Arrivals 1788-1825  plus the one existing Sydney newspaper offered basic details.[4] Sydney merchant, Alexander Berry, on a speedy return trip to England to supply the Sydney emporium he established with Edward Wollstonecraft, chartered the Royal George.  Under Captain William Powditch the 486-ton vessel left London on 18 May, calling at Rio on its voyage to Port Jackson where it dropped anchor on 7 November 1821. The ten cabin passengers (one of whom died) were supplemented by fourteen steerage travellers plus a valuable and extensive assortment of merchandise. On 10 November 1821, the Sydney Gazette reported that an important dignitary was on board, Governor Lachlan Macquarie’s successor, His Excellency Major General Sir Thomas Brisbane. Additionally, the news conveyed by this ship of Napoleon Bonaparte’s death, confirmed that the demise of this famous prisoner had once more opened St Helena to all shipping.

The twenty-three year old maid must have been impressed with the welcome and fanfare greeting their arrival.  After the Governor was saluted with 19 guns fired from Dawes’ Battery, Lt Governor Erskine paid his respects, then Governor Brisbane signaled his intention to disembark the following morning. On Thursday 8 November the vice-regal party, including Lady Brisbane, infant daughter Isabella, and his wife’s sister Miss McDougall, landed at Bennelong Point’s private stairs and after meeting Mrs Macquarie proceeded to Parramatta where they stayed until Governor Macquarie returned from visiting northern settlements.

But where was Hannah amid these festivities? Hannah herself had defined her role when applying for her husband’s assignment but, as is customary with unnamed servants, nothing personal was tendered. Hannah Lee was servant to fellow passengers and new settlers, George and Isabella Acres of Mill Park, Roscrea, County Tipperary. By the time of the New South Wales 1828 census, George and Isabella had three daughters, Arabella 4, Susannah 2 and infant Sarah. Questions immediately arose: Was Hannah Irish or English?  Was she employed by the Acres before they left Tipperary or did they recruit her in Queens County, Cork or London?  Had she known John Daley in Ireland?

Following comprehensive searches in Ireland, England and Australia, finally two entries for Hannah Daley were found in the Sydney and Darlinghurst Gaol indexes.[5] My heartfelt thanks to GSQ researcher Joan Reese and Ann Smith, indexers of this series. Although never a convict and arriving in NSW as a free servant, seventeen years later Hannah Daley had been arrested by police and imprisoned in Sydney Gaol on 29 December 1838. An annotation indicated that she posted bail and was discharged from Sydney Quarter Sessions on 18 January 1839. Real joy came with the description recording Hannah’s gaol admission.

This record shows that Hannah was of Irish birth, from Abbeyleix in Queen’s County (a mere 29km from Roscrea), had arrived free in 1821 on the Royal George, was a Protestant and a laundress. Associations forged in the Irish midlands, Daley and Joyce and Hannah and the Acres, had persisted across the world.

This story might have related quite different adventures if Father Therry’s records had been accepted unreservedly, if each and every original record had not been checked and if every single contemporaneous document was not consulted for elusive ‘missing’ details.  Shauna Hick’s advice long ago to always look at gaol records again triumphed. No wonder it is so difficult to completely finish our family stories – all those bubbling questions.