A few months ago, my father sent me a photo of a medal he had been shown while visiting a relative he had not seen for many years. This relative is his second cousin and they have a great uncle in common. The medal had belonged to this great uncle, Hugh Smith, and had been handed down to my father’s cousin by her mother. She brought it along to show my father. No-one at the family gathering knew what the medal was and dad sent me a photo of it just as a matter of interest. I, too, had no idea what it was, but it looked intriguing. On one side were the words NSW Regiment Cavalry and a very unusual insignia that looked like an elephant’s head with a crown above it. On the other side were the words Lance Team Compt. H. Smith Lismore 26th Jan 1892. I was immediately interested and set out to see what I could discover about this medal. 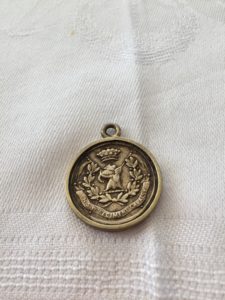 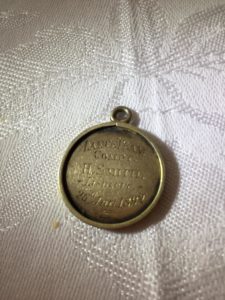 The impetus for the formation of a cavalry troop came about because British military support for the Australian colonies ended in 1870. After that time, each colony was responsible for its own defence until 1901 when the Commonwealth of Australia was formed and the Commonwealth Forces were created. The idea for a cavalry troop was enthusiastically received among the many horse owners in Sydney and in October 1884 a meeting was held at the Oxford Hotel in Sydney on the corner of King and Phillip Streets. The room was filled with interested and willing volunteers and the motion to form a volunteer cavalry troop was unanimously carried at this meeting. It was also decided to hold a preliminary parade and this took place in Moore Park in Sydney in January 1885. The volunteer cavalry corps was gazetted in January 1885 and known as the Sydney Cavalry. However, very soon, enthusiasm caught on throughout the colony and country districts began to form their own troops. In December 1889 it was announced in the Government Gazette that the separate troops previously known as Troops of Cavalry now be named the New South Wales Regiment of Cavalry. Lord Carrington, Governor of New South Wales from 1885 – 1890, was appointed Honorary Colonel of the regiment and the elephant’s head used on the regiment’s badge is from the Carrington family crest. The badge is an elephant’s head with coronet on crossed lances with sprays of waratah, the floral emblem of the NSW colony.

The Regiment of Cavalry went through a number of name changes. Initially they were called the Sydney Cavalry Troop but then as troops began to form all over New South Wales they became known as the New South Wales Cavalry Reserves. In December 1889, the Government Gazette announced that the various troops would be called the New South Wales Regiment of Cavalry and then in January 1895 they were gazetted as the New South Wales Lancers. They were given the title Royal in 1935 and then took their current name in 1956 when the 1st Royal New South Wales Lancers and the 15th Northern River Lancers amalgamated. The story of their conversion to lancers is an interesting one. Despite not being officially gazetted with the title Lancers until 1895 the cavalry had converted from a light horse troop to lancers in late 1885.  In early 1885 the Governor of New South Wales offered military support to the campaign in Sudan. At the farewell parade for these troops the Sydney Cavalry Troop appeared as escort to the Governor.  When the Sudan contingent returned in August 1885 the Sydney Cavalry Troop again escorted the Governor to greet the returning troops. The Commander of the Military Forces to Sudan had brought back with him two lances that had been presented to him as a memento of the campaign. Soon after this the Sydney Cavalry Troop was converted to lancers. They were now regularly appearing as a vice-regal escort and the title of Lancers was thought to give the troop an air of pageantry which befitted a troop that was to be a vice-regal escort on many occasions. In fact, a General Order was issued in October 1886 stating that an escort of Lancers should be present on all occasions when the Governor and Commander in Chief were attending official ceremonies. It appears that the government may have been slow in providing lances to all the troops because there are reports of incidences where the troops carried bamboo poles or horse whips instead of lances at some official parades and ceremonies.  However, it is reported that in 1889, 500 lances were supplied.

From the very early days of inception the cavalry troops took up the full range of military activities: marches, parades, training camps, tournaments and competitions. It was at one such tournament that my ancestor was awarded the medal in question. A search of Trove delivered me some valuable information about the event.

The newspaper, The Northern Star, on Saturday 30 January 1892, reported the tournament which was held in Lismore on Tuesday 26th January 1892. 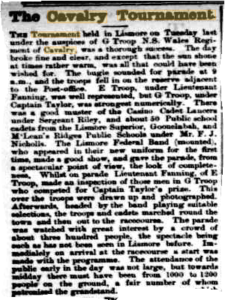 And here in the same article is the report of the lance exercise for which Hugh Smith was awarded his medal.

The name H. Smith on the medal is Hugh Smith (Hughie) born in 1859 at Runnymede Station near Kyogle in New South Wales. He was the eldest of 8 children and came with his Irish parents, Patrick and Ellen, to take up land for farming near Coraki when the Free Settlers Act was passed in the 1860s. He became a very successful farmer himself from a very young age.  He died in October 1938 at the age of 79 and his obituary was published in the Richmond River Herald and Northern Districts Advertiser on Friday 21 October 1938. Part of the obituary describes his farming success and his good character. 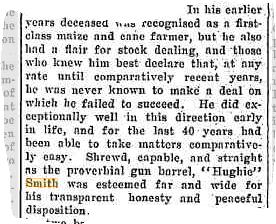 It is interesting how a chance meeting with a distant relative can shed light on an area of history that I had no knowledge of and provide insight into a small part of the life of one of my ancestors. I like to imagine this young farmer working diligently all day on his farm and then galloping off to training practices or parades and tournaments in the evenings or on special occasions. I wonder what went through his mind. Was he excited at the prospect of adventure? Did he love the pomp and pageantry? Was it the prospect of friendship and camaraderie of other young men? What did his family think of his ventures? I will never know. However, I do know that the knowledge of any part of the life of my forebears makes them more real and alive to me.