↓
GSQ Blog→postcards→Search for the hidden stories.

I enjoy writing. Short stories, essays, even the odd birthday card can have a deep and meaningful diddy penned by yours truly attached to the salutation. I’m certainly no novelist that’s for sure, well not yet anyway. But I do like to tell a story. If the subject has a humorous side, or maybe something a bit scary, or as we all can relate to, a family mystery, I like it even better.

A few years back when I was working on a family album, I added several pages with some of my observations of what life may have been like for my ancestors. I drew on what I did know and imagined the rest.

I breathed in the possibilities documented history was telling me. These stories took me to places, to the places my ancestors lived, worked, and died. I got to thinking a bit more about my ancestors, and what personal stories may be hidden. And did I find some interesting stuff. 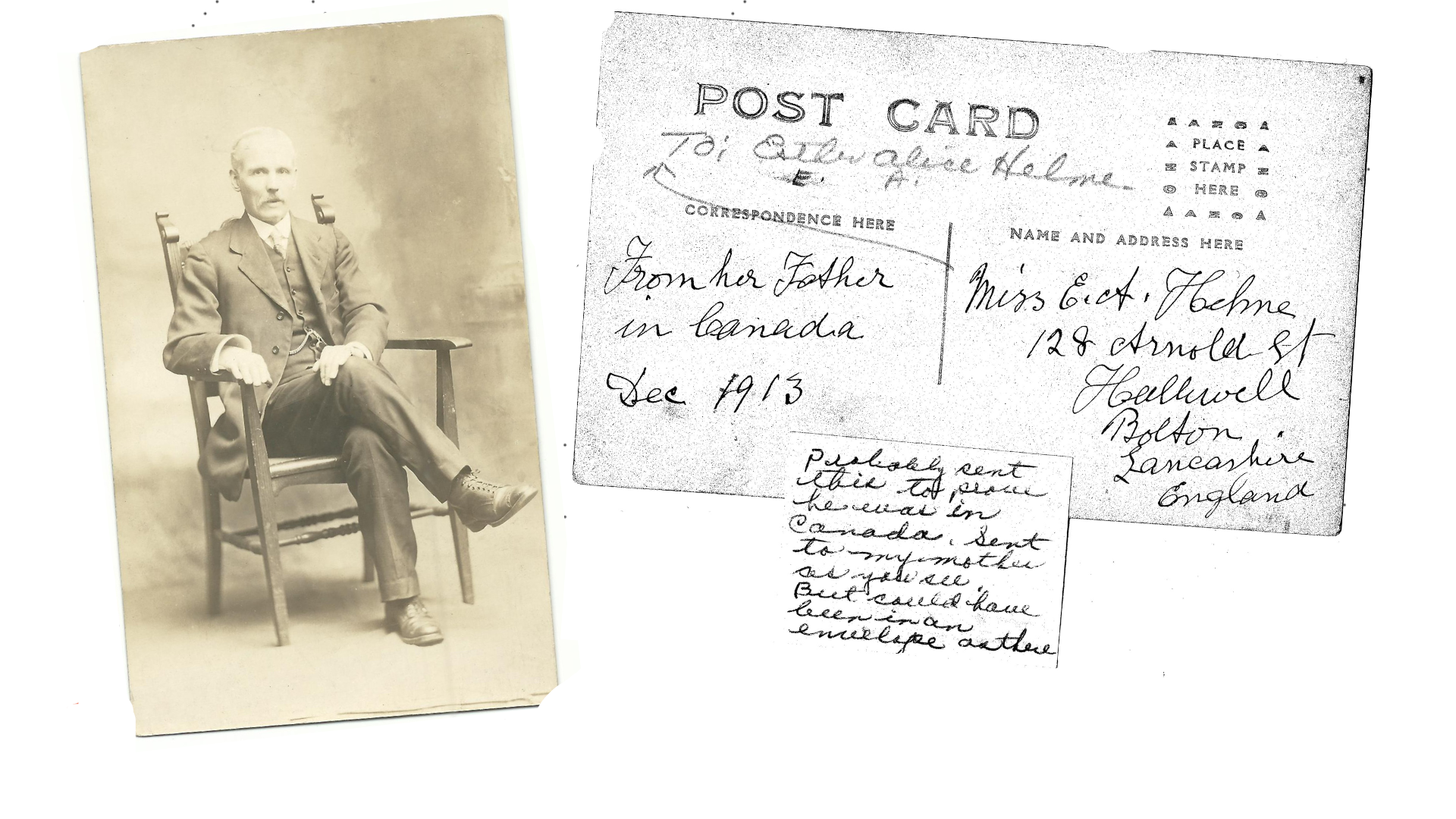 It is believed my maternal great-grandfather, John Joseph Helme, went to Canada in 1913 on his own, or perhaps with another man. He visited the prairie provinces, and then on to Windsor and Toronto Ontario, possibly to determine where best to settle his family. He was fifty-four years old. 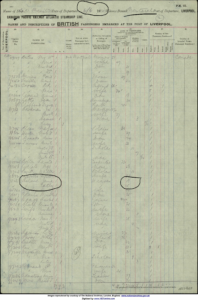 John Joseph wrote to his wife, Esther Alice and requested that their two middle daughters, Jane (18) and Esther (16), join him. Which they did on June 6, 1914, sailing on The Manitoba from Liverpool to Montreal, unaccompanied. And this is where my imagination kicks in.

Of course, I don’t imagine for a second that Jane and Esther, my grandmother, danced on their toes to lively Irish music with other solo-travelling adolescents or fell madly in love with young penniless migrants.

This is just two short years following the sinking of the infamous Titanic in the same frigid waters off Newfoundland, and in the exact same month that Archduke Franz Ferdinand of Austria and his wife, Sophie, were assassinated in Sarajevo, and only one month before World War One breaks out. The excitement for the adventure these two wide eyed teens must have been experiencing had to be severely overshadowed by the recent global events and past unimaginable tragedies.

How different it would have been for these two sisters in cold metropolitan Toronto Canada compared to the damp, small, familiar streets of Belmont in Lancashire England. It must have suited them though. 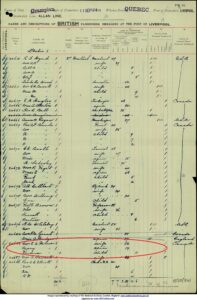 As the story has been passed down, Jane and Esther loved Canada and encouraged, perhaps begged for their mother and sisters to join them.

My great grandmother decided to sail to Canada with Mary and Prudence only a few months later. Or was that the plan all along? Perhaps they had to travel separately simply due to passage availability?

I have discovered the ship’s manifest for the 11 September 1914 crossing onboard the Grampian for my great grandmother E.A. Helme and Mary (19) and Prudence (11), the oldest and the youngest.

But of course, the story didn’t stop there.

What one of my sisters seems to understand, is that my great grandparents did not get along.  Which may have been the reason for the Canadian migration in the first place. Curiously in August 1916 John Joseph sailed back to Liverpool, alone. Too old to be enlisting to fight in World War One. There are simply no military records to even suggest he did.

So why? Why would he encourage his wife and 4 daughters to move to Canada at the start of a war to only take himself back to the UK two years later? Could he have had other reasons? More personal reasons? Money problems perhaps? A woman perhaps? To date I can’t find any clues as to what lead him to return to England. 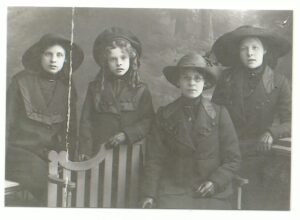 The sisters in Canada.

What is quite interesting though is that in July of 1922, six years after her husband left Canada for the UK, my great grandmother sails to the UK, alone. Then on 31 August 1922, she boards The Ausonia in Liverpool and sets sail for Montreal. But wait, so does John Joseph. They sailed on the same ship but did not travel together.

In fact, Esther Alice, my great grandmother, lists herself as a widow on the ship’s manifest! Must have been quite the argument.

The ship’s manifest is also proof that something was not right in their world. They list different addresses in the UK. Hers, with a sister, his, a small apartment very close to the last place they all lived in Belmont before 1913.

Both UK and Canadian census records from 1921 further prove a separation.

So why? I simply have no idea. These are the constant struggles of researching family stories without the luxury of having the person to talk to.

The search and questions continue. 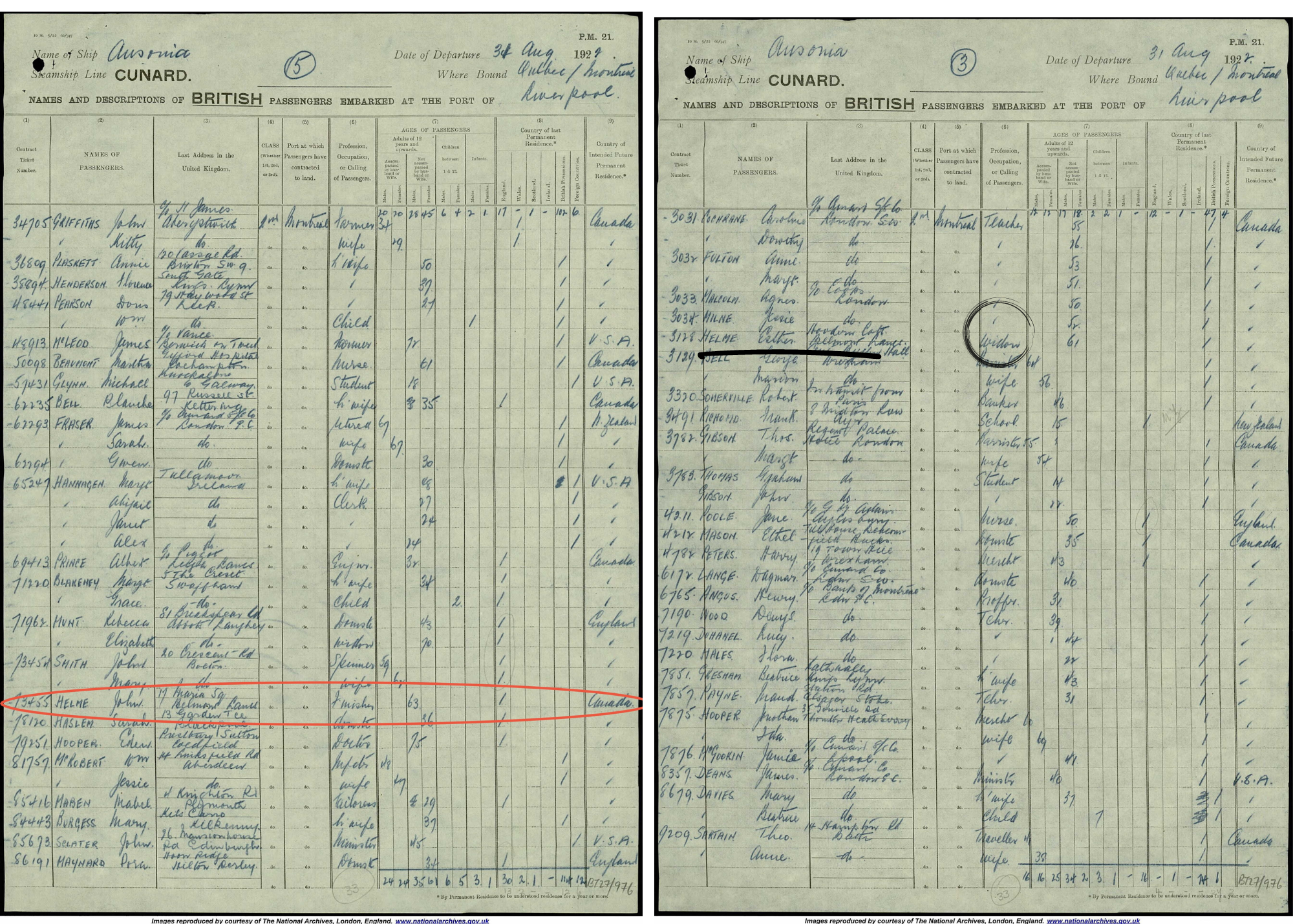 A side by side view of the ship’s manifest showing their separate listings.