Our heads, hers blonde and mine brunette, were close together as we concentrated on the computer screen barely centimetres in front of us.  We moved between different websites, focusing specifically on a simple map of the Western World and plotting a journey that had irrevocably set the course for modern Australian history.  “Did they come out on ‘my’ ship?” my niece almost squealed, listening intently as I explained that the Family Tree Chart on the table in front of me gave details of the First Fleeters John Small and Mary Parker.  With childlike enthusiasm my pint-sized relative told me that her class had been studying Australia’s First Fleet at school.  She was particularly focused on the ship the Alexander.  Excited myself at this point, I asked her what she could remember.

We started with the basics:  a fleet is a group of ships.  In this case, the First Fleet was a group of ships – she named five of them from memory – that that set sail from Portsmouth, England in June 1787.  Trawling her memory and attempting to find the words that would express the knowledge she had accumulated, I was told across the dining room table that the convoy landed in Sydney Cove on 26 January 1788 after sailing past Cape Town and Rio De Janiero.  The leader was Captain Arthur Phillip who, my budding historian remembers, said prayers.  Those on the ships were officers, marines, surgeon and convicts – transported to Australia for committing crimes such as theft.  I took notes as she went on to tell me that openings on the ships were secured by ropes to prevent escape, the exiles had chains around their ankles and were punished by lashings with whips called cat-o-ninetails.  Describing this implement, used to control behaviour and impose a stringent set of values on the burgeoning community, ‘Miss Ten Years Old’ lead the conversation and sketched an outline of ‘the cat’ so her aunt had a clearer understanding of this instrument of torture. 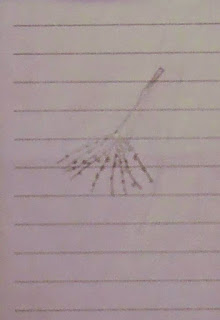 Disappearing while dinner was being prepared, my young researcher returned, telling me that, while numbers varied according to different sources, it seemed that approximately 1400 people sailed from Portsmouth and just over 1300 disembarked at Sydney Cove.  A neatly hand-drawn table was given to me to help me identify the breakdown of the types of passengers. 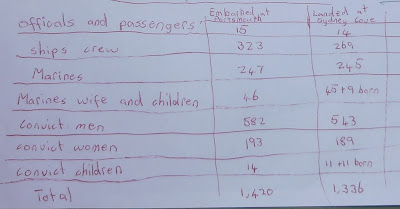 The Fleet was made up of 11 ships; six convict transports, each with its own Master, two Royal Navy Escorts and three store ships.  Google Maps helped us understand that The Fleet first landed in modern day Spain, then crossed the Atlantic to Brazil and sailed around the Cape of Good Hope.  They sailed below the 40th parallel, sighted Van Diemen’s Land and went on to Botany Bay and finally Sydney Cove.  My niece’s memory had served her well as our research confirmed and added to the details she had initially remembered.

I was, I admit, the subject of eye rolls and sighs and my name was spoken in such a way as to extend it many syllables beyond its written form (Auntyyyyyyyyyyyyyyyy Liiiiiinnnndhholllllllllaaah) as I insisted that my now flagging historian search until she learned where Van Diemen’s Land actually was.  What a delight to the see the ‘Aha of Discovery’ happen for her when she realised that it was the earlier name given to the now Australian state of Tasmania.  To see her point to the map and name each port that was part of the journey undertaken by the eleven and know that this line she was tracing constituted a 7 month voyage for the sailors, their families and the more than 1000 convicts, was a joy.  To see her enthusiastically engage with the task at hand and answer her carefully worded questions gave me a strong sense of satisfaction.  To see her apprehend data on the screen in front of her and history become real was very exciting.
As for the subjects of GSQs Family Tree Chart, John and Mary, what happened to them?  The Chart tells us that they were married by Reverend Richard Johnson at Sydney Cove, less than a year after the First Fleet arrived.  Of the seven children born to them, the youngest two, Sarah and Samuel, were twins.  Sarah and her older brother John both married members of the Patfield family, possibly siblings themselves.  The chart provides numbers, broken down by gender, of John and Mary’s grandchildren and great grandchildren, acknowledging that, as at 30 July 1976, “families (are) missing” from the descendants of the twins Sarah and Samuel.  Looking with surprise at the listed names and the number of children (seven), grandchildren (74) and great grandchildren (at least 423!), my little researcher exclaimed, “Wow, how many children did they have?”  “Lots”, I replied laughing. 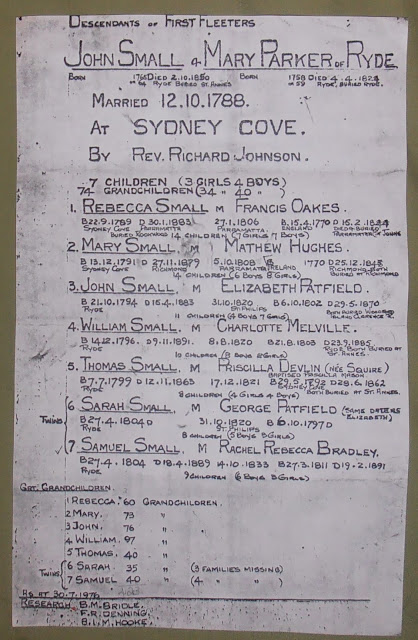 So, to answer the question that began this journey, “Did they come out on ‘my’ ship?’  No, my budding genealogist they did not.  Mary Parker arrived on the Lady Penrhyn (http://www.lithgowmercury.com.au/story/1263311/beer-synonymous-with-australiana/) and John Small on the Charlotte https://illawarrasmallbradleyukfirstfleetfamilies.wordpress.com/.