↓
GSQ Blog→certificates→When did he find out? Did he ever find out?

It is really important to always “Roadmap Your Records” to know how and why a record is produced as this can give information about the record and its contents.

To get a certificate in the old days, a clerk looked at the entry then typed it up for us on modern certificate paper. This meant that a historical birth certificate when bought this way didn’t have the parent’s marriage date, as the modern certificates didn’t have this question (we had to ask for it to be given to us on a separate piece of paper). Following that the pre-1890 entries were digitised and we would get an image of the register, which was much better as it decreased the risk of transcription and interpretation errors, plus we could see any notations that occurred in the margins. So, my pocket money went on repurchasing all my pre-1890 certificates again, they are currently $22.90 for each online pdf image. But did you realise the certificate I was purchasing was the registration clerk’s entry into the book, so the signatures from the register are not the actual participant’s signatures?

The birth certificate document is a form that the parents had to give to the Registrar within 60 days or pay a fine of £10 (as of 1912) plus if it was past the 60 days an additional fee of £2/0/6d to make the declaration. These were pretty hefty penalties for the time, with either the mother or father having to sign as the informant. For marriage certificates the minister had to submit the copy to the registrar within one month on penalty not exceeding £50 (in 1904).

Once these were released I started spending my pocket money again, to get the actual source image certificates. I had known that Nora Courtenay was twelve years older than George Howard Busby when they got married, as on the typed copy certificate that I had received, this was stated. What I didn’t know until I got the source image was that at their marriage Nora had lied about her age and stated she was 28. George was 20 and married with the consent of his father, with the marriage taking place at the bride’s home. 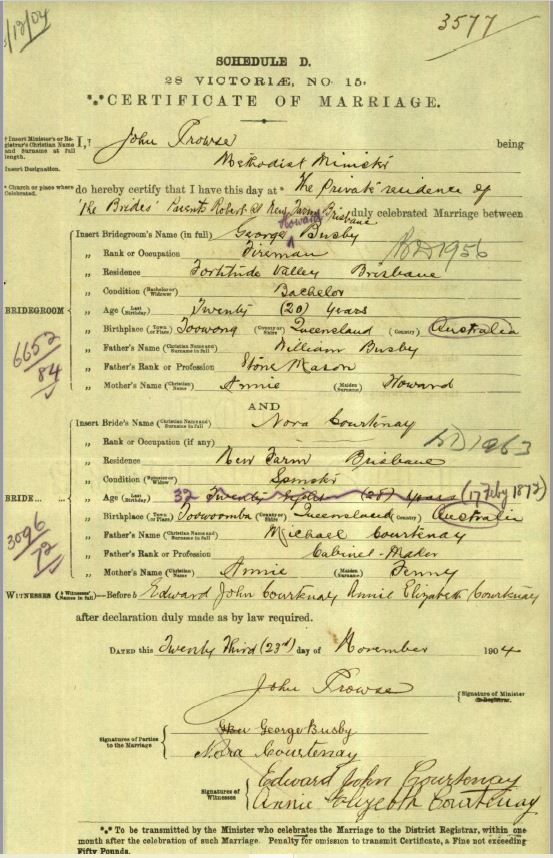 As you can see on this image the clerk has perused it closely and done some checking and made some amendments: George had not listed his middle name, Nora had lied about her age and was actually 32 not 28. The clerk has also cited his source and made the notations of the index entries for the births.  Another clerk has also made notations regarding the death years of 1956 and 1963.

Interestingly, I also have the source image of the registration for their youngest child in 1912. George was the informant and filled out the form. He still believed Nora to be eight years older than himself and had listed her as 36 when indeed she was actually 40. This could well be the reason that there were only three children born 1906, 1908 and 1912. Though George did go off to war joining up only a few weeks after war was declared in 1914. It is unknown if he ever realised she was actually 12 years older.

Not all births have a source image available.  Sadly, the majority of the death source documents do not survive as it was not considered necessary to keep these more than ten years past the death.

I always like to get as close to the original record as possible firstly to decrease any transcription errors and secondly where possible, to collect the signatures of my ancestors. I think you can tell something about the personality of someone by their signature. These can change over time.

In 1904 at age 20 George Busby signs George Busby, eight years later he signs George H. Busby. On his enlistment 30 September 1914 it is George Howard Busby. You feel he is maturing. I don’t have a lot of family photos so signatures when available are a substitute. I have had success in my Culley/Cullicoat research using signatures to determine that the John Cullicoat born 1802 is the John Culley witnessing a marriage in the 1860s and writing his will in the 1880s but that is a story for another day.

When you purchase certificates through the Queensland Registry online it is very worthwhile to sign in when checking out with your QGov account because this way a record is kept of what certificates you have purchased and you can download them again from there if you need to in the future.

The Queensland registry also has a newsletter Family History Bulletin that comes out via email a few times a year (you subscribe from the BDM index search page.) It stated that over 10,000 historical images had been downloaded during the April to June quarter. The department are making some “How to” videos on searching etc and these should be available soon.

A new feature of the newsletter is “Missing Link” where members of the public can put up a brick wall problem and see if people can solve it. If you can help then you email BDMMarketing@justice.qld.gov.au and they will put you in touch with the person who made the query.  You are also able to send them a query to be placed in the newsletter.

If you have early Queensland ancestors, is it time for you to check out the details and maybe order your own digitised original source document? This is the second option of the three on the search page.