It can be extremely frustrating to know something about an ancestor but not have the evidence to back it up. When it comes to serious genealogical discussion a statement like “Oh everyone knew they came from Tasmania” just will not do. 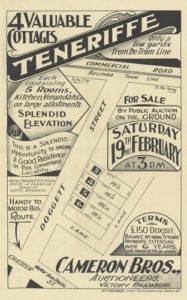 So when you do locate a record that apparently justifies the claim, there are grounds for rejoicing. But it takes the edge off your excitement to find a second record (from the same source) that apparently contradicts the first. In this case, two pieces of evidence were not better than one. Let me explain.

The firm of auctioneers and agents now called Cameron Brothers was established in Queensland more than 150 years ago by John Cameron and was later joined by his son, also John Cameron1.

The younger Cameron was definitely born in Queensland in 18622 but all indications were that the elder was an immigrant; but from where. The birth of Sampson Cameron (father and grandfather of the two Johns) was located in Edinburgh3 but his son was apparently born after the family left Scotland.

So it was with some trepidation that I set out to investigate the assertion that the family “travelled around the southern colonies a bit before settling in Queensland, but definitely Tasmania”. FindMyPast seemed a good place to start because they offer a record set called Tasmania Births 1803-19334. And it immediately paid off with the information that John Cameron, son of Sampson and Cordelia, was born in 1834 in Launceston and in 1834 in Hobart.

Obviously, an experienced researcher does not rely on the index presented by a subscription site so I viewed the two transcriptions. And the mystery deepened.

As I pondered why a birth in 1834 would not have been registered until 1836, a more important question came to mind. How were births being registered in 1834 or 1836 when civil registration did not commence5 in Tasmania (actually van Diemen’s Land) until 1839?

A cautious researcher does not rely on the transcriptions offered by a subscription site, so I opened the images of the records. And all became clear.

John Cameron Senior did not have two births (which you had probably guessed) but he did have two baptisms. And they took place two years apart in towns on opposite sides of the island.

On 5 November 1834, a few weeks after his birth, John was taken to the parish church of St John in Launceston to be baptised. His details (including a date of birth 8 October) were entered as record number 695 in the Parish Register. This was later extracted by the civil authority as item 5766 in a new derivative record.

Approximately two years later, Sampson and Cordelia had a second son and duly presented him at St David’s Church in Hobart Town for baptism on 29 September 1836. Had they lost John’s baptismal certificate or simply forgotten the 1834 ceremony? (I reject the entirely frivolous suggestion that the Vicar was offering a two-for-one deal.) Whatever the reason, they had John Cameron baptised a second time immediately before the ceremony for his sibling William James.

When it came time to record the date of John’s birth, a mishap occurred. I cannot believe that any father would not remember the birthday of his son and heir, so there must have been some miscommunication. Perhaps Sampson retained his Edinburgh burr and that caused Rev Bedford to mishear the date. Or it might have simply been an errant stroke of the pen, but Entry 202 in the Parish Register records 18 October 1834 as the date of birth of young John. Some years later that information was extracted as derivative Entry 6834 by the colonial government — a second (and contradictory) record of the “birth” of John Cameron.

This journey through some early colonial records has reinforced for me a number of principles that we all know but may be tempted to ignore in the thrill of the chase.

There is another puzzling difference between the records of John’s two baptisms. In 1834, the Quality or Profession of his father was given as Gentleman. In 1836, he was a Clothier. That transition apparently involved a trip to the Bankruptcy Court, but I have no time for that now. There are the births of seven more Cameron children to locate — just one each, I hope.