↓
GSQ Blog→family histories→Fishing for ideas to start writing
There are many people who have produced numerous books, articles, websites, etc. giving advice on writing a family history. These range from the inspirational to the technical. In light of my role as Convenor of the Writing Group, I usually look through bookshops to see if I can pick up a few ideas to pass on to Writing Group members. We have several books for loan to group members. I firmly believe, however, that if writing doesn’t come naturally to you, you need to address both your physical as well as mental readiness to help you take the plunge and start writing, bearing in mind that delaying action in order to achieve a state of total readiness can also be considered procrastination.
I’m the first to admit that I need more time, I need to finish something else off first, I don’t know where to start, the list goes on. One of my main problems, though, is that I want to write the ‘perfect’ family history, one that is interesting and engaging to the reader. This notion of perfection is difficult though without ‘stuff’, other than basic documents such as certificates and census records, to include. This is why I envy those who have inherited lots of family memorabilia. I can also appreciate why a mass of such ‘stuff’ can also bring problems and make it difficult to decide how to approach the writing: big decisions are needed on what to put in and what to leave out. Maybe too much can be as problematic as too little. 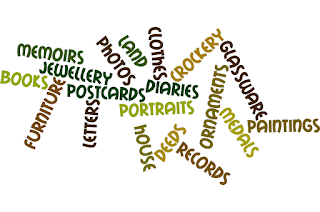 Our speaker in April was Ruth Delbridge, whose book Mischief, morse code and ministry, won the QFHS book prize in 2012. This book was a great example of what could be done with the materials at hand, and how research can fill out the rest. The first part of the book was an edited memoir of her father-in-law RJR Delbridge, starting with his early years in England and culminating in his years in Queensland. This memoir gave a fascinating insight into the man, his motivations, and his philosophy on life. This memoir is a tangible and wonderful example of the kind of memorabilia that can lie in family records.
The hook for the second part of Ruth’s book was to tell the story of three women. Ruth used this part of the book to give voice to the women and their families and supported the book’s sub-title Life, loss and the legacies of love. Each woman experienced the highs and lows that life can throw at us, but little of this was formally documented. Nevertheless, Ruth, a ‘passionately curious’ researcher followed up on all references to occupations, houses, districts, towns to understand more about these women’s lives and what she found during her research to supplement the bare facts contained on certificates and similar records. She brought a sample of her research materials with her for ‘show and tell’, to underpin her comments on the extent of her research. These materials confirmed that it is possible to weave an interesting family history even if we don’t have any memorabilia.
Noeline Kyle’s recent book How to write your family history (Unlock the Past 2015) is very succinct and draws together ideas found in her other books. She supports the notion of finding a hook for your family history. One suggestion is to take a story from a newspaper from the day and year that an ancestor was born and use this to provide context for the birth. It doesn’t matter if your ancestor isn’t mentioned, it’s the contextual information about the world in which the birth occurred which is of interest. Another idea is do research on a particular occupation, especially if this appeared frequently in your family. Do you know what the life of a bootmaker was like? My great-grandfather worked in the centre of Liverpool in England; he made and repaired boots and shoes, like his father before him. His customers included the wealthy medical practitioners who lived in adjacent streets, as well as low to middle income families, maybe even patching up boots for those in the workhouse up the road. An incredibly diverse environment.
When I read the word ‘hook’, I immediately thought of fishing. Try a fishing expedition of your own to see if you can find a hook as the basis for your next piece of writing. Rather than concentrating on the person you ‘feel you have to write about’, cast a net over the material you have gathered over the years, or throw in a line, and see what you come up with. Write about what interests you and be prepared to do some broader research to round out the story. Family histories don’t have to be written in any particular sequence; you are more likely to keep going if you start somewhere that’s interesting for you.