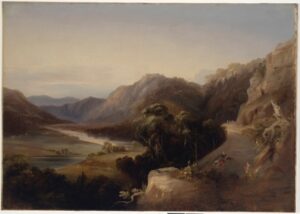 I remember when I was a young child, my grandmother, told me a fascinating but tragic story about a lady who lived a long time ago. “One day long ago,” she said, “one of your ancestors went outside her home to get some wood and she never returned. She disappeared and was never seen again.” “What happened to her?” I asked and my grandmother explained, “It was thought that she had been taken by the blacks”. This story haunted me and it soon became my mission to discover if it was a true story. However, after investigating many sources of information over many, many years, I am still wondering just what happened to my great, great, great grandmother, Martha Shaw.

Martha was born about 1808 in Bristol, however as there are no records regarding her birth and baptism, nothing is known about her parents.[1] The first documented evidence of her life, is a record about a trial at the Old Bailey on Wednesday, 25 June 1823.[2]  It seems that 15-year-old Martha was behaving badly as she and a friend, Ann Powell were charged with the theft of a hat, valued at 10 shillings (about $A55 in today’s world) from seven-year-old Elizabeth Davis. [3] The “lusty’ Martha and her ‘thin’ accomplice were found guilty and sentenced to 14 years transportation.[4] They remained imprisoned in the infamous Newgate Gaol until they were taken to a ship, named the Brothers.[5] 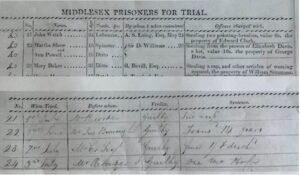 When Martha boarded the ship with 89 other female convicts, a description of her physical appearance was documented. As short stature features among the female descendants in my family, it was interesting to read that our Martha was only four foot, eight and a half inches tall and being described as fresh-faced with brown hair and grey eyes, she must have been an attractive lass.[6]

The ship departed the ‘Downs’ on Saturday, 6 December 1823 taking Martha and Ann far away from any family they may have left behind.[7] Shortly after disembarking, problems began to occur. Some of the female convicts were willing to participate in prostitution in return for special favours and enticements.[8] The conflict on board the Brothers involving a section of the crew and the first mate, culminated in six female prisoners being arrested and the first mate was suspended from duty. Although Martha’s character on board the ship was later noted as “bad” and “turbulent”, she was not involved in the criminal activity that was later referred to the courts.[9]&[10]

Little else is known about Martha’s experience during the long voyage, although, she was seen by the surgeon-superintendent, Mr James Hall, who treated her for the following symptoms: “Complaints of pain in the limbs, and forehead, lassitude, heat, restlessness and thirst”. Mr Hall treated her medicinally and possibly if her symptoms were severe, Martha may have been subjected to purging and blood-letting.[11] Before arriving in Sydney, the Brothers landed at Hobart town in Van Diemen’s Land where Martha’s friend Ann Powell disembarked, leaving young Martha to face her new home alone. The ship finally sailed into Sydney Cove on Monday 24 May 1824.[12] 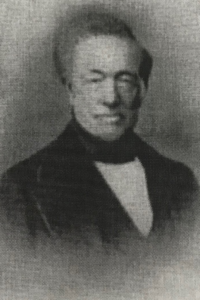 Martha was noted to have work experience as a house servantand following the 1825 Convict Muster, she was sent from the Female Factory at Parramatta to Wilberforce in the Windsor district where she was assigned to Mr William Nichols.[13]&[14]  She worked as a government-servant but, for unknown reasons, Martha absconded from Mr Nichols in March 1826 and was returned to the Female Factory at Parramatta. Coincidentally, the Superintendent was Mrs Fulloon, who was a passenger on the Brothers in 1823-24, so she may have known Martha.[15] &[16]

Later that year Martha’s destiny took another turn. A young ‘Ticket of Leave’ man, Thomas Wells, requested a visit to the Factory to select a young woman to become his wife. Perhaps our lusty Martha recognized this as her opportunity for freedom and agreed to marry Thomas. Their application to marry was approved by the Reverend Samuel Marsden on 15 July 1826.[17] He believed that marriage was “important for convicts’ happiness and usefulness and in preventing them from spending a ‘vagrant and vicious life to the end of their days.”[18]  Thomas and Martha were married at St John’s Anglican Church at Parramatta by the Reverend Samuel Marsden.[19]

When their first child was born in 1828, Thomas and Martha were settled in Webb’s Creek in the district of Lower Portland Head, where Thomas worked 50 acres of land, 15 acres of which were cleared and cultivated.[20] It appears that Martha was a general servant, so she remained duty-bound to her husband. I can only speculate about their relationship although more than a decade later, their family had grown to a total of six children. There were two boys aged between seven years and fourteen years as well as one girl aged less than two and three girls aged between two and seven years. The family lived in a wooden house in the Cornelia district of Windsor and Thomas continued to farm.[21] In August 1835 Thomas received a Conditional Pardon granting him freedom although he would never be allowed to return to England.[22]

Events that unfolded over the following years constitute a family mystery and the true facts may never be revealed. There are a number of theories including one that Martha absconded from Thomas. An old record exists confirming the birth on 6 February, 1845, of a child, James Crawley, to James Crawley and Martha Wells. He was baptized on 5 January, 1846. According to this same record, this event occurred in the District of McDonald and Colo in the County of Cumberland.[23] 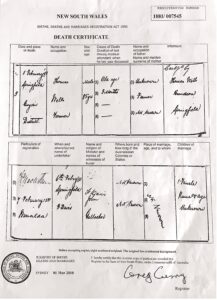 Another family tale relates how Thomas and other family members left the Windsor area and moved north via Wollombi, the Liverpool Plains area and further north to the New England district. A death certificate in1881 states that Thomas Wells died, aged 81 at “Springfield”, Warialda, the property of his grandson, Thomas Wells. Due to the omission of many details concerning this Thomas Wells, his identity remains uncertain although, it is also possible that his family tried to conceal his convict background. Some historians claim that families were ashamed of their convict heritage.[24]

As for Martha, the other theory claims that she was taken by Blacks remains unconfirmed. Attempts to find details in newspapers and accounts of Inquests in Government Gazettes have failed to satisfy the ongoing need to discover what happened to my 3x great grandmother.