Can a life be affected if begun in war?

Perhaps for William Thomas Phillips, born in Portugal on 6 December 1813, during the Peninsular War, this isn’t a question which needs to be asked. He was only four years old when his parents, James and Lydia Phillips, and older siblings, Henry and Jane, finally returned to peacetime in England in 1817 following the aftermath of the Battle of Waterloo.

Aged nine when the family arrived in New South Wales, Australia in 1822, William Thomas is unseen until his name appears in the 1828 census and his letter requesting a land grant that same year. His education is unknown, but he was able to read and write. His other brothers, Henry, Frank and Alfred, were all educated away from home but not William, or, if he was, there is no mention of it in records or family papers.

In 1835, aged twenty-two, he made his first appearance in the Returns of the Colony (known as the Blue Books), as the Deputy Postmaster at Paterson.[1] Measures enacted that year made it illegal to avoid postage so the postal service was an attractive job prospect. However, the salary was unreliable. It was not a fixed amount; instead, postmasters received twenty percent of postage fees, so those in rural areas earned little remuneration for their work.[2] By 1838, as Postmaster for Paterson, William received the princely sum of twenty-one pounds, six shillings and seven pence.

When and where William Thomas Phillips met Mary Anne Lyons, a young Irish woman from Dublin, is unknown. Perhaps she worked on one of the local estates or in a shop in Maitland, Paterson or other nearby towns.

The couple was married at St Joseph’s Church, East Maitland on 17 October 1843. The marriage entry for William and Mary Anne Lyons reeks of secrecy.[3]

There are no witnesses, William is supposedly a member of the Roman Catholic Church (he was Church of England), neither signed the registry and the certification entry is blank. Why was this such a surreptitious wedding? Did William think that his parents would not approve of his choice of bride? Were they married in haste because she was pregnant as their first child was supposedly born in 1844, but no baptism or other record can be found?

Based on later records, Mary Anne Lyons was about nineteen years of age when she married and her death record states that she was born in Dublin where her father was a surveyor.[4] 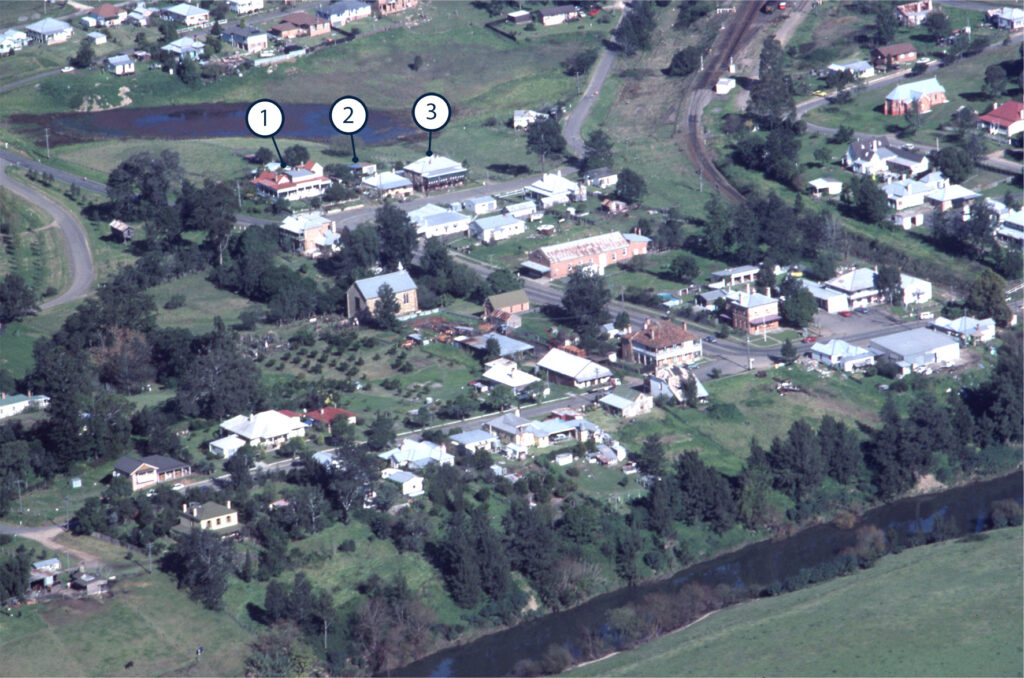 Aerial photograph of Paterson taken June 1985 by Cameron Archer. With permission.
1.Sunnyside (previously Woodchester) on the corner of Prince Street and High Street, site of the Phillips’ store.
2.Noumea, in Prince Street, probably built by the Phillips family, lived in for a brief period by Alfred Phillips.
3.Paterson Tavern, built on land which was part of the original grant to James Phillips and later owned by William Phillips between 1844 and 1847.

It is highly probable that William and his family lived in a house attached to the Paterson store (built by James Phillips). It has also been suggested that the residence of William Thomas and Mary Anne Phillips was the present day Noumea (also built by the Phillips family), next door to the store block in Prince Street but this is not likely.

By late 1849, William had embarked on a new business venture as spirit merchant and storekeeper.[5] In addition to the selling of spirits, the store also stocked the usual paraphernalia such as pills and ointments, drapery, grocery items and ironmongery.[6] He once again took on the role of Postmaster for Paterson in 1851 as well as continuing his spirit and general store trade.[7]

James Phillips died on 29 March 1851 and while his father’s death was expected given his age of seventy-five, it would still have been a blow to William and may have caused him financial distress. In June 1851, he requested that all accounts due to him must be settled, with all credit accounts discontinued.[8] Was this the first sign of the death knell for his and Mary Anne’s marriage? Twelve months later in June, all of William’s stock in trade, household furniture, two saddle horses and a ‘superior’ side saddle were offered for sale.[9] Mary Anne completed the sale of the remainder of the stock in October 1852.[10]

Sometime between 1859 and 1864, Mary Anne Phillips moved to Brisbane with Robert Hector Paulovich. Around 1866, Robert Paulovich started a drapery and small goods business in Queen Street and then later moved to South Brisbane, operating in a building opposite Graham’s Hotel.

Mary Anne too began her own business. In early 1870, she advertised Riverview House at the end of Russell Street, South Brisbane, as being available for rent to gentleman boarders and families. The house was a ‘large and commodious residence’ adjoining the Old Corporation Ferry.

She continued advertising the premises over the next four years. In 1923 memoirs, Archibald Meston described the house and family in 1870:

On the bank of the river, at the foot of Russell Street, was a big stone house, kept by a Mrs. Phillips, who was Mrs. Paulovitch [sic], but was usually called by the name of her first husband. She had two handsome daughters, Kate and Lydia Phillips. In after years Lydia married Gore Jones, the present day barrister, whose father was the famous Gore Jones, a barrister of Brisbane’s early days… .[11] 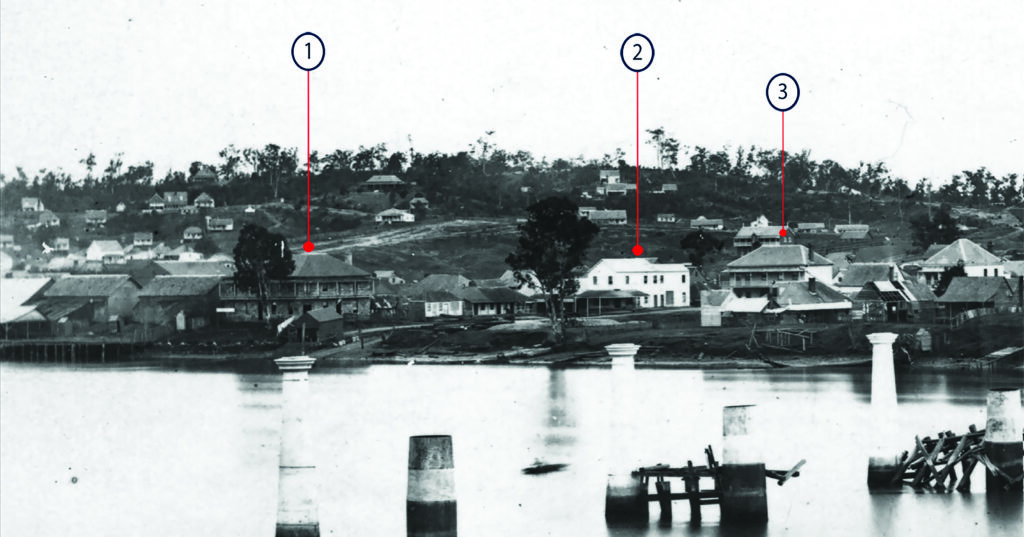 Looking across the Brisbane River to South Brisbane, photograph taken in 1869.
1. Riverview House adjoining the Old Corporation ferry with Russell Street in front of the house.
2. The store operated by Robert Hector Paulovich.
3. Graham’s Hotel.

In 1873, Mary Anne moved from Riverview House to further along the river to Sidon Street and took on the lease of Acton House (now known as the Ship Inn Hotel) owned by Captain Francis. 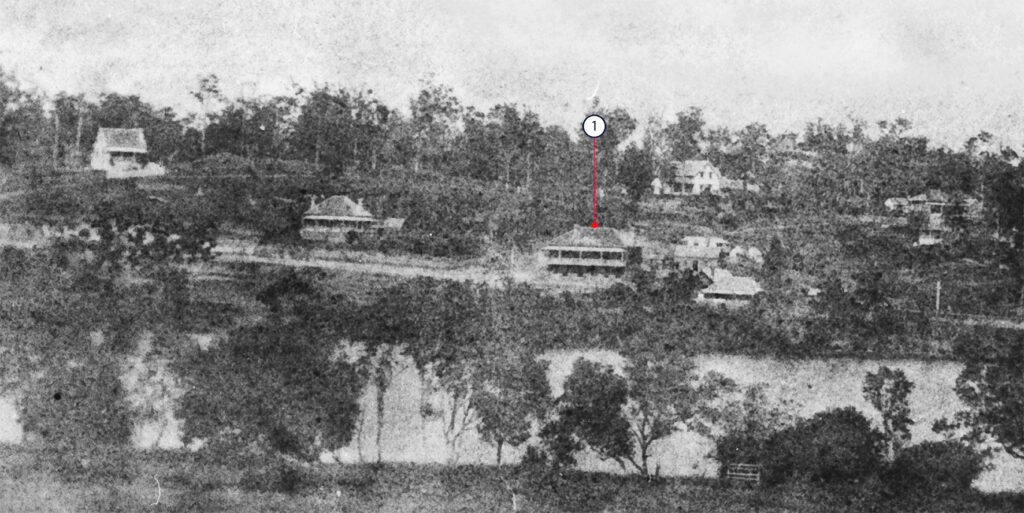 It was opened to boarders in December but sadly, barely a month later, Robert died on 30 January 1874.[12]

Mary Anne continued to run Acton House as a boarding house until March 1876 when she advertised her household furniture for sale. She moved to Hews Cottage in Grey Street and died of bronchopneumonia on 27 September 1876, almost three years after Robert. She was only fifty-two years old. Her given address was Bona Vista Cottage. Even towards the end of her life, she acknowledged her relationship with the Phillips’ family. William Thomas Phillips died in Mudgee in 1864.

Both Mary Anne and Robert are buried in the South Brisbane cemetery at Dutton Park but they are in different graves. The headstone for Robert Hector was erected by his son Robert Hector junior but Mary Anne’s grave is unmarked.

The above is an edited extract from:
Sherwood, Cathie. Commissary, Colonial, Jack of All trades. A Phillips Family History: Paterson to Bundaberg. Unpublished thesis, Society of Australian Genealogists, 2020.