Regular readers will have met the Priestley family in my September post. That post told the story of Robert Priestley and his wife Jenny/Jane Tattersall, from Lancashire. In a family of 12 children, their only daughter Hannah married my 2 x great uncle Josiah Hall, one of the sons of Joseph Hall and Hannah Radford, whom we have also met earlier. My September post also highlighted the relatively short life of their fifth son, Enos, who had migrated to Victoria in 1853 and died on the goldfields aged about 30 years. This post concerns Robert and Jenny’s sixth son Jared, who was born in 1828.

In that earlier post, I wondered whether Jared and his wife Anne had travelled to Australia to join Enos and his wife Sarah to escape a grim existence in industrial Lancashire but after a re-think, maybe it was the lure of gold. Whatever the reason, several members of the Priestley family were quite adventurous and didn’t stay within the confines of their Lancashire homes. It appears that Jared and others had a notice published in The Argus in August 1853 which read “Jerad Priestley and David Wilkinson of Bacup, Lancashire, Mr Fles, Mr Christopher Postlethwaite of Brighton, would oblige Enos Priestley by writing to the Richmond Post Office.” An earlier notice in June 1853 suggested that this C. Postlethwaite was looking to find Jared Priestley of Heald, Lancashire. Maybe they were all friends but had travelled independently and were trying to connect with one another.

I was intrigued by Jared and was prompted to research him further. Born in 1828 he had a particularly fascinating life story, which I tried to piece together from newspapers, census and other records. This research uncovered links to Russia as well as Australia. Jared married Ann(e) Rhodes on 26 July 1852 in Todmorden, Yorkshire, which lay just over the county border from Goodshaw in Lancashire. They travelled to Victoria on the Henry Gillespie via Cape Town, arriving in Melbourne on 25 December 1852. From a newspaper report I discovered Australia was where they spent their honeymoon, but it appears that they lived in Victoria for much longer before returning to England. 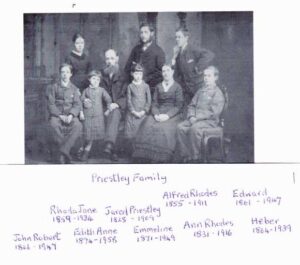 Jared and Anne Priestley and their children, Mitchell family tree at Ancestry.com

The 1850s were an important period in Victorian history as gold was discovered in places such as Beechworth, Castlemaine, Daylesford, Ballarat and Bendigo. At its peak, some two tonnes of gold flowed into the Victorian treasury each week.  So, maybe it was gold which lured Enos, Jared, and their friends to travel to Victoria. According to his obituary, during his time in Australia, Jared had worked partly on farms and partly in the gold diggings, most likely in Bendigo.  Two of his children were born in Sandhurst (Bendigo) Victoria: Alfred Rhodes in 1856 and Rhoda Jane in 1858. His next child, Edward, was born in 1861 in Moscow, Russia. The family most likely returned to England around 1860. Their remaining children: Heber, John Robert, Emmalina and Edith Anne were all born in England between 1865 and 1874.

My interest in the Priestley family began with a newspaper notice about the wedding of Emma Gibson, daughter of William Gibson of Hebden Bridge, late of Raootova, Russia to Elisha, the ninth son of Robert Priestley which appeared in the Leeds Times of 11 June 1864.  I found elsewhere a comment that Jared had worked in Russia.

What prompted Lancashire textile workers to work in Russia? According to an article on British Workers in the Russian Textile Industry (https://drawnground.co.uk/2015/04/british-workers-in-the-russian-textile-industry-before-1917/) Russia had an enormous and thriving textile industry before the 1917 revolution. It ranked fourth in the world for production after Britain, USA and Germany. Most of its machinery was imported from Britain and many Russian mill owners employed managers and engineers from Britain to set up their machinery, supervise its use and train Russian workers. This article derived from research on what life was like for these Lancashire cotton workers who relocated to Russia. According to his obituary, Jared twice lived and worked in Russia as an overlooker. An overlooker was an overseer or foreman, especially in textile mills. This seems to fit with the description of the type of work carried out by Lancashire mill workers in Russia.

I have not researched all the Priestley brothers, this is a collateral line after all, but as well as Jared, brothers Jephthah and Elisha also spent time in Russia. Jephthah in particular seems to have been an astute business man with interests in mineral water, botanic beverage and fruit cordial manufacturing, as well as cotton and real estate. Elisha most likely met his future bride Emma there, but I’ve not been able to identify where Raootova was located. Jared was definitely living there at the time of his son Edward’s birth in 1861 and possibly also as early as 1845 to 1852. Maybe his marriage to Anne Rhodes in 1852 and subsequent travel to Australia provided a greater adventure.

Jared was enumerated as a roller coverer throughout the UK censuses from 1861 to 1901 and even up to shortly before his death in his early 80s he was working at the Peel Mills in Bury, Lancashire. Unlike some jobs in the textile industry, this one appears self-explanatory: a roller coverer covered the mechanical rollers used for spinning yarn. This could have been a job for a skilled person. 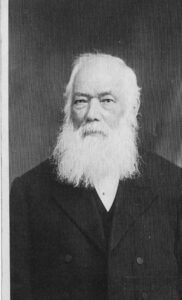 The other aspect of Jared’s life which is evident throughout is his strong faith. He practiced within the Methodist communities in which he lived, in no matter which country. A veteran Sunday School worker, he was well-known not only for his Sunday School work but his religious work in general. In Australia he attended the Wesleyan School in Bendigo and in England he first attended the Goodshaw Chapel and then the Limefield United Methodist Free Church and Sunday School in Bury. He served as superintendent of the Church for some time, filled almost every other office in that Church and taught in the Sunday School for more than 40 years. His portrait was hung on the school wall in recognition of the high regard in which he was held.

Jared’s obituary published in the Todmorden Advertiser and Hebden Bridge Newsletter of 23 April 1909 detailed many aspects of his life. Described as a man of fine physique and commanding experience, he was in splendid health until shortly before his death. He was universally highly regarded.  He certainly looks impressive in these photos which were shared on a public family tree at Ancestry.com. Although this story is about Jared, I think credit also needs to be given to his wife Anne who was willing to travel the world with him. Bearing children on the Australian goldfields and in Russia would have presented her with many challenges.

I have learnt several things by doing this research, the main one of which was not to make assumptions. I could not find three of Jared and Anne Priestley’s children in the GRO Registers and first assumed they had not been registered. It was only through further research, initially in census records, that I discovered two were born in Victoria, Australia and a third in Moscow in Russia.  I also learnt about the many Lancashire cotton mill workers who travelled to Russia for periods of time to assist with the development of their textile industry, which could be why they are missing from the UK censuses and civil registration records.

What an interesting research exercise this turned out to be and I could have written so much more about other members of this family, but space precludes that. My maternal ancestry continues to reveal some surprises. I hope you also find it interesting.