↓
GSQ Blog→family histories→How do you pass on family stories to your grandchildren?

My first grandchild was born last year and I spent six weeks with him a month after he was born.  He lives in Chicago so while I was there I spent some time thinking about how I could pass on some stories of his Australian family without just giving him a list of relatives with names and dates.

One day during my visit, I was in the American Writers Centre on Michigan Avenue in Chicago, which had just opened, reading about the lives of the many authors, playwrights and poets and investigating the interactive exhibits they have.  One of the rooms contained old typewriters behind glass which had been used by different authors as well old typewriters on open display which visitors to the Museum could use to experience what it felt like to type on these old machines. 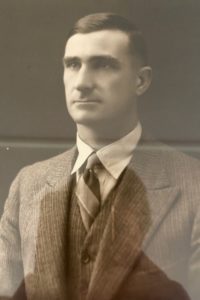 Author’s father about the time he brought his typewriter

These typewriters ranged from one made in the 1940s to an electric typewriter from the 1970s. They all looked very familiar to me. The typewriter from the 1940s reminded me of the one my father owned which he was very proud of and on which I sometimes was allowed to type. The keys were very stiff and the ribbon didn’t always work efficiently which was how the one in the Writers Centre operated! I decided I could write a short memory of using my father’s typewriter for my little grandchild to read when he gets older. His life will be so different and who knows what he may be typing on or if anyone will need to type because everything may be verbal recognition.

The Chicago Cultural Centre is also on Michigan Avenue and for many years since my son moved to Chicago I have wanted to see the Dame Myra Hess Memorial concerts that are held there every Wednesday. These concerts are named in honour of the pianist Myra Hess who played and organised almost 2,000 lunchtime concerts in the National Gallery, London during World War 2.

My Uncle John McGill, my mother’s brother, was in England as part of the Bomber Command of the British Airforce during World War 2. He was killed during a bombing raid over France in June 1944 and is buried, with two airmen from the same Lancaster plane, in a Commonwealth War Grave in Souzy-la-Briche, a small village south of Paris. 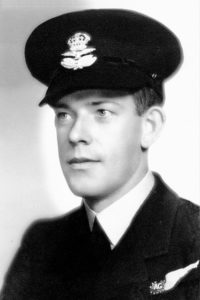 He was stationed in Lincoln and in his free time would often go to London, writing long letters to his family describing the things he experienced on these excursions. He had studied medicine before leaving for the war and was also a wonderful pianist and in a letter of 3 December 1943 he wrote

‘I went to the lunch time concert at the National Gallery. There is a musical hour held there every day. It has been organised since the war by Dame Myra Hess, a famous musician herself, and is held between one and two each day. The working people can come here and eat their lunches to the most beautiful classical programmes. Dame Myra was playing on this Monday as she often does, as many as five days of the week. She played a Beethoven Sonata, a Brahms Rhapsody, Grieg’s ‘Au Printemp’ and two études of Chopin. It was a beautiful hour and wonderful to think that you can drop into these concerts for an hour any day’.

I thought of my Uncle John as I sat and listened to the concert in Chicago and how much he would have enjoyed the pianist’s program of waltzes from around the world and how he would have been in awe of the spectacular venue of the Preston Bradley Hall with its amazing glass Tiffany dome. I thought how lucky I was enjoying this concert feeling safe and secure not like my uncle who had heard his concert in London with the terrible threat of war constantly on his mind.

I wrote the following two pieces based on my memories of my father and his typewriter and my Uncle John and the concert I saw in Chicago. I wrote them as if addressing my grandson and hope they will be the first of many I shall write for him. 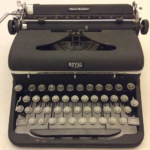 A typewriter similiar to that owned by Sue’s father

Look at this typewriter. People used to type on them before computers. I typed on one just like this in a museum in Chicago when I came to see you when you were a tiny baby. It was just like the typewriter your Great Grandad Bell used to have which he kept in his office at home. I was allowed to use it sometimes when I was a little girl but I had to be very careful. The keys were very stiff but all in the same place as a computer keyboard!

I went to a beautiful concert in the Chicago Cultural Centre. The concerts are called the Myra Hess Concerts. Myra Hess (see her playing the piano in the photo) was a pianist and played beautiful music every lunchtime in London to cheer people up during a horrible war in Europe.

They have these concerts in Chicago to remember what a special person she was. Your Great Great Uncle John, who played the piano, used to go to these concerts when he was in London.He wrote to his parents in Australia about how much he enjoyed them and how it made him forget about the war for a short time. I often wonder if he was in the audience in this photo. Do you think he was? 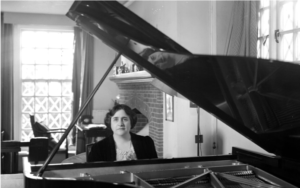 Myra Hess (from the Hulton Archive) 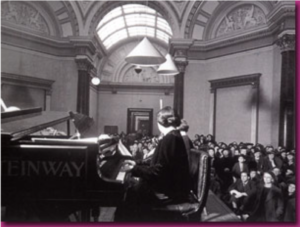