↓
GSQ Blog→immigration→The Voyage of the Saldanha

THE VOYAGE OF THE SALDANHA

The Saldanha of 1562 tons register, sailed on the 8th for the new colony of Queensland with 367 passengers on board… Considerably more than half the passengers have had their passages paid for them by the colonial Government. These consist of female domestic servants, farm labourers, and a few mechanics. The passengers …comprise among them 100 married couples, about 70 single women, many of them domestic servants and 100 single men, principally persons intending to engage in agriculture, farm labourers and mechanics… Mr Jordan, the Queensland emigration commissioner, who inspected the ship at Gravesend, was fully satisfied with the arrangements on board. He addressed the passengers, giving them much sound advice for their comfort on the voyage, and to secure their success in the colony.[1]

My Great Grandfather, Henry Smith of Sheffield and his wife Elizabeth Yates with their two children were among those 100 married couples who set sail in steerage class for Queensland, on that momentous day in October 1861. Why did they leave? What were their hopes? What did it turn out like and did it live up to their expectations?

There is little doubt that Henry, like so many others in the industrial cities of England, was captivated by the picture of the Colony of Queensland portrayed by the immigration agent Henry Jordan, who was giving tremendously popular lecture meetings in England. Many who heard him were eager to move to this new Eden he portrayed. As one writer expressed it, “in manufacturing towns, the smoke begrimed inhabitants find it difficult to resist the temptation to emigrate, in such glowing colours does the lecturer enlarge upon the claims and attractions of the new colony.”[2]  Henry Smith’s job as a silver stamper was repetitive and mind numbing and he was a brash, self- assured, hardworking young Yorkshire man who longed for an outdoors life and to be his own master. Also he and Elizabeth had lost two children in infancy and they both wanted a better life for their remaining children away from the smoke and pollution of overcrowded, industrial Sheffield. 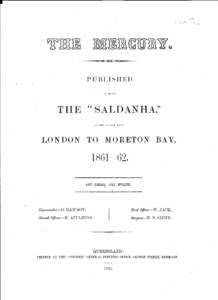 Front page of ‘The Mercury’ onboard newspaper

What was the voyage out to Queensland like? Fortunately for the genealogically inclined descendants of the emigrants on the Saldanha on the 1861 voyage, we have left to us a weekly ship’s newspaper, “The Mercury” one of two newspapers published on board.[3] It is written to entertain, which it does with a certain tongue-in-cheek jokiness, but also to inform. In its first offering on 6 November 1861, it pokes gentle fun at the other newspaper the “Gazette”, which describes a “grand ball on the quarter deck” but also offers “a few hints to passengers for promoting the general health and comfort of everyone” which included above all things, cleanliness in body and clothes.

Beds and bedding, it stated, were to be exposed once a week or more often. The cabins or berths were to be washed “occasionally” with soap and water, and great care taken that “no soiled clothes be left in corners or under beds as they generate an atmosphere most prejudicial to health”.[4] All of this was very important information as the voyages of the early immigrant ships were often marked by hardship and suffering. Steerage accommodation was cramped, the bunks were often wet and food and water could be scarce. Sometimes, if there were gales, people were confined below in almost total darkness with poor ventilation. Sanitary arrangements were primitive, cleanliness was poorly observed and sickness among passengers, including the dreaded typhoid was often the result.[5]

“The Mercury” also attempted to caution the immigrants against having too much in the way of “Great Expectations”, having, it reported, heard the most extravagant plans propounded because of the certainty many people had of making huge profits from growing cotton in the Colony. While there was no doubt that hard workers would do well, the paper counselled that those who imagined making a fortune were sadly mistaken. A working man would certainly make better wages than in the old country, but for that increase in pay he had to give up many of the comforts of home, and the company of friends and family.[6]

For most of the voyage, the ship was favoured with fine weather and moderate winds, although there were times when things got rough. “The Mercury” describes the Grand Concert which took place on the main deck on Christmas Eve as being beset by “high winds and intense cold’ and on Christmas Day itself there was a  gale blowing. The paper reported that in spite of this, full justice was done to the Christmas cheer!

The Saldanha arrived off Tasmania on the 12 January 1862. The favourable winds which had given her such a good voyage deserted her and it took another 12 days to travel the 1000 miles to Moreton Island. Then, after getting the pilot on board, a heavy gale sprang up, driving the ship back out to sea. The gale continued for three days with “the ship labouring much, taking water all over” and splitting most of her sails.[7] In all she drifted 40 miles north of Cape Moreton. Anchorage was at last reached on 29 January, and the passengers were eventually conveyed by the steamer Breadalbane, to Kangaroo Point.[8]

The long-awaited arrival of the immigrants in the Colony however was unlikely to inspire them with confidence in their future. They were discharged in the dark, at a rickety tumble down wharf, which required caution to walk even in daylight. Old and young, single men and single women, married couples, children and babies found themselves eventually in an immense shed smelling of bones and hides, with no separate quarters and no light burning. There was a pile of loaves and a pile of raw beef, placed there by persons unknown, but there was no water, no fire and no conveniences for cooking. Some of the hungry passengers actually ate the meat raw.[9] These appalling conditions led to public outcry and letters to the Courier suggesting an inquiry into such gross mismanagement of the provision of temporary accommodation for immigrants.[10]

In spite of this disgraceful and traumatic introduction, most of the immigrants who arrived by the Saldanha went on to become productive members of the new Colony, some outstandingly so.[11] Henry and Elizabeth Smith were amongst these, establishing in the face of many trials and setbacks, the first orchard on the Burrum River at Howard, naming it the “Sheffield Orangery”.