↓
GSQ Blog→convicts→Learning by extending your research and attending conferences

I have often commented that I don’t have any Australian family as I migrated from England in the 1970s. For a long time, I restricted my research endeavours to those countries where I had known ancestors – there was more than enough to keep me going. Along the way, however, I’ve discovered that I am not the only member of my extended family to have made that long journey from England to Australia. For instance, one of my paternal grandfather’s sisters migrated with her family in 1927 to Victoria. Chatting to GSQ members, developing and presenting education classes, volunteering as a GSQ library assistant and, more importantly, attending conferences, have all enabled me to learn a lot about Australia. Life as a GSQ library assistant is, to paraphrase from a well-known movie, like dipping into a mixed box of favourite chocolates – you never know what you’ll find. 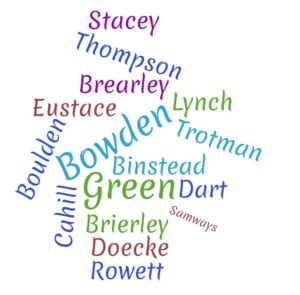 Some of the surnames researched. Produced by author using Wordart.com, March 2020

I belong to a small group of family historians who meet monthly; we take it in turns to set a research challenge for the following month. One challenge in 2019 was to research a female convict and I chose one at random. This opened my eyes to the wealth of information about convicts. Then one of my daughter’s friends said I could borrow her convict if I wanted to research them further. This set off an exciting adventure into her ancestry, which became the challenge not only for our November meeting, but also for our February meeting. Research into her ancestry revealed not just one convict, but four; research in Australia has extended over Van Diemen’s Land/Tasmania, Victoria, South Australia, New South Wales and Queensland – there is a tentative link to Western Australia, but this hasn’t been followed. Overseas we’ve explored records in England, Ireland, Scotland, USA and Germany. What a rich heritage she has and what a huge amount I’ve learnt from the research activities and strategies of my fellow genealogists.

Given that three of her convicts were transported to Van Diemen’s Land – one in 1821 (Thomas Trottman) and a father and son (Arthur and George Binstead) in 1831 I was really keen to attend the lectures by Hamish Maxwell-Stewart on the Unlock the Past Tasmania cruise in March. Hamish is a history Professor at the University of Tasmania and he has been doing extensive research on the convict population of Van Diemen’s Land. 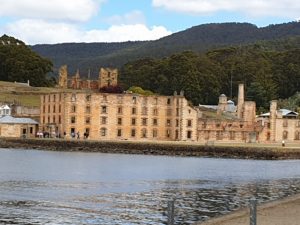 Beginning with an overview of convict transportation from galley service to Siberia, Hamish then took us through the essential sources for piecing together convict lives; getting the most out of physical descriptions, including tattoos and scar patterns; various research techniques including linking available records to gain a full picture of an individual convict. Did convicts lie? They most probably did and this can be resolved by truth-testing the information in a range of source materials.

What happened to convicts after their term ended? Did the convict stain run through subsequent generations? As far as the ones I was researching are concerned, the answer to the latter question is no. Thomas Trotman relocated to Victoria and left his convict past behind – he was recorded as a ‘gentleman’ in his Will. Arthur and George Binstead were sawyers and had been convicted of machine breaking as part of the Swing Riots. Once they were pardoned, they made their way to join Arthur’s eldest son John, who had been transported to New South Wales, before establishing the first sawmill in Brisbane on the site of the current Queen’s Wharf project (see http://queenswharf.org/people/the-binstead-family/). Branches of the family subsequently settled in the Coomera area in Queensland, whereas George who had married the daughter of Thomas Trotman in Hobart Town, eventually settled in Melbourne. Research has uncovered the range of joys and tragedies that impact on most families, but also a desire for these former convicts to create the best possible lives for themselves and their families in a new country.

I have learnt so much from this research and attendance at the UTP conference was the icing on the cake. It’s always possible to learn something from an event such as a conference, even if at first glance you don’t think the topic will be relevant. I now not only know much more about Australia’s history, but also about German migration, researching women ancestors, British newspapers and gazettes, probate and apprenticeship records in England to mention a few other topics covered on the cruise.

In the free time that is now available to us, it is well-worth seeking out learning activities, online and in print, to ensure that we continue to expand our knowledge base. You never know what you will discover as you delve into virtual archives and other repositories. Best wishes for your research.