My great great grandfather Owen Connor was an Irish convict who arrived in Australia on the St. Vincent on 05 January 1837. He had been sentenced in August 1836 at the Galway Summer Assizes to transportation for life for stealing a heifer. After sentencing he was detained on board a hulk awaiting transportation[1]. The St. Vincent departed from Cork Harbour on 13 September 1836 and on board were 120 prisoners from the Essex hulk, moored in Kingstown Harbour, and 73 prisoners from the Surprise hulk, moored in Cork Harbour, known as Cove[2]. The indent of prisoners did not specify the hulk each prisoner had come from so I became interested in finding out which hulk my grandfather had been on and the conditions onboard these hulks.

In my search I came across a wonderfully informative book by Anne McMahon titled “Floating Prisons: Irish Convict Hulks and Voyages to New South Wales 1823 – 1837”[3]. From this book I discovered that there had only ever been 2 prison hulks in Ireland – The Essex and the Surprise. They were established as a solution to overcrowding in the Irish county prisons. The book also gave me detailed insight into the conditions experienced by the prisoners onboard the hulks while awaiting transportation to New South Wales.

HMS Surprise was a decommissioned British Naval frigate. The Essex was an American frigate originally employed by the American navy to protect American commerce and was used during the English – American war of 1812-14. She was captured by the British Royal Navy during that war and was taken to Portsmouth harbour. She remained there amongst old French, Dutch and Spanish warships until 1824 when she was fitted out and sailed to Kingstown harbour in Ireland to be used as a prison hulk. Both vessels required repairs and modifications before they could be put into service as hulks. Some initial repairs were undertaken in Plymouth Harbour and then further work was carried out when they reached Irish waters. Both vessels required the building of high bulwarks surrounding the deck to prevent escapes, as well as other modifications such as a hospital. 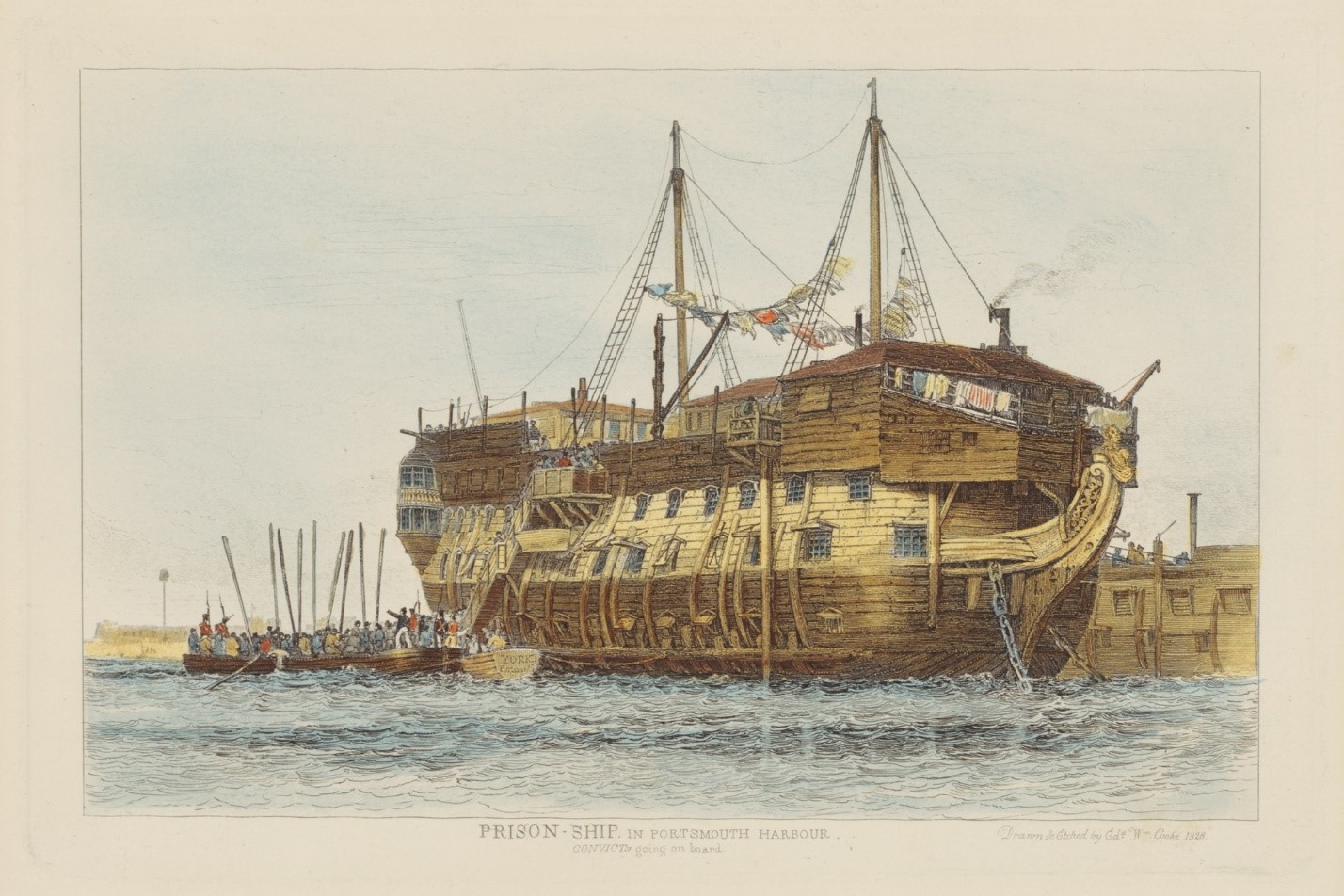 The first hulk to be commissioned was the Surprise in Cork Harbour, to hold 500 men. It came into service in May 1823. At that time all convict ships sailed from Cork so those prisoners held in Dublin gaols would continue to be shipped by brig to Cork as was already the practice. However, this changed in April 1825 when the Essex in Dublin harbour was commissioned. From then on, all prisoners from the northern and eastern counties were held on the Essex. The Surprise only received prisoners from the western and southern counties. Convict ships now departed from both Dublin harbour (Kingstown) and Cork harbour (Cove).  However, some ships took on prisoners from both hulks. They would collect prisoners from the Essex in Kingstown and then sail to Cove (Cobh) to collect additional prisoners if the convict ship had not been able to meet its quota.

Conditions on both hulks were very harsh. Rations were meagre, some reports even said they were at starvation level and so the health of the prisoners was severely compromised leading to weakness and disease. Clothing was completely inadequate and prisoners, in many instances, were barely clothed. The clothing was administered by the prison administration and manufactured by male and female prisoners at the Cork Convict Depot. The fabric used was fustian, a cloth made of cotton and flax and not suitable to resist the cold. Many of the garments issued to prisoners on the hulks were thin, musty, worn out and in some cases carrying fever germs. Many convicts arrived in New South Wales with their clothes in rags.

There was very little to occupy the prisoners during the day as a system of schooling or work was never fully implemented. Any instruction the prisoners received was from convicts themselves in the subjects of alphabet, spelling and reading. Likewise, a system of work was never organised. Keeping the vessel clean, preparing food and repairing clothing gave the prisoners some tasks to carry out but this did not occupy all of them all of the time. Consequently, boredom and frustration were common and led to violence and disorder.

Over the years on both hulks, there were a number of instances of mutiny and arson attempts. Disputes broke out amongst the prisoners themselves because no attempt was made to segregate warring factions; these were prominent in Ireland at that time. Injuries, many of them serious, often resulted. As a consequence, the discipline was harsh and the prisoners were required to wear leg irons at all times. Some of the surgeons remarked on the detrimental effect the lack of meaningful daily engagement had on the men, causing them to appear pallid and weak. Prisoners slept in very close quarters and contagious diseases were easily spread.  Diseases prevalent on the Essex were phthisis, diarrhoea, dysentery, fever, ophthalmia, untreated ulcers, psora and scorbotic taint. Surgeon’s reports from the Surprise indicated similar conditions.

Etching of the interior of “Defence” a prison hulk. https://seasaltercross.com/2015/03/18/life-inside-the-prison-hulks-staying-alive-2/

A surgeon was assigned to sail with each of the convict ships and many of these surgeons feared that prisoners would not be strong enough to survive the long journey to New South Wales. There was the constant fear that disease could break out and indeed it often did. There were cases of scurvy as a result of the poor diet, symptoms of which were often present prior to departure. There were many cases of colds, catarrh, bronchitis and rheumatism which the surgeons attributed to the inadequate clothing in the cold conditions.

The surgeons’ instructions were to ensure that all convicts were assessed prior to the journey to ensure that they were in a fit state to undertake the long and arduous voyage. Often, they refused prisoners because of their poor state of physical or mental health, or their age. The ages of prisoners on both hulks ranged from under 10 years of age to at least one who was over 80. However, the surgeon’s interests in the prisoners’ welfare conflicted with the will of Edward Trevor, the Superintendent of Prisons, whose main concern was cost cutting.

Once the convicts were onboard the convict vessels, they were the responsibility of the British Government and the British convict service and no longer the responsibility of the Irish central government. Superintendent Trevor knew that by despatching as many prisoners as possible onto the convict ships, regardless of the state of their physical condition, he could make huge savings on provisions, hospital and medical costs and even burial fees. Consequently many prisoners who were unfit for the journey were allowed onto the transport ships. On the other hand, some prisoners considered the conditions so bad on the hulks that they concealed their illnesses and injuries in order to pass the assessment for embarkation.

During the life of the hulks they were visited every few years by Inspectors who reported their findings to the central prison administration. The reports completely ignored reality and were always favourable. They emphasised the success of the role of the hulks in taking pressure away from the county and city gaols, thereby cutting costs to the central prison administration and also ensuring that public opinion toward the hulks remained favourable.  The only criticisms voiced were vague mentions of lack of meaningful work and schooling and occasionally a mention of overcrowding. However, no concrete action was ever taken to address these issues. 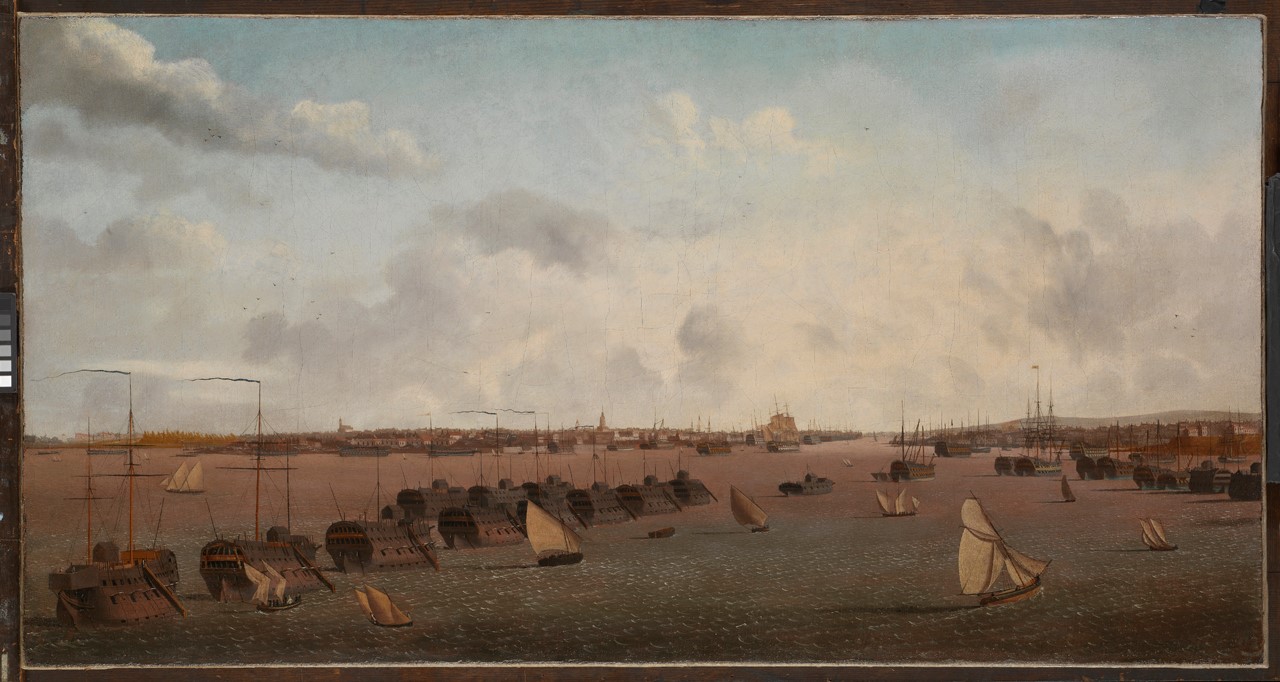 The St. Vincent with my great great grandfather onboard was the last prison ship to depart from the Surprise, leaving Cork harbour on 13 September 1836. She had sailed from Kingstown Harbour after taking onboard 112 prisoners from the Essex. However, there had not been enough prisoners deemed fit for the journey to fulfil her quota so the St. Vincent then sailed to Cove and took on an additional 68 prisoners and 10 free settlers (boys whose fathers had been sent to New South Wales as convicts). She was one of the seven prison ships that had taken on prisoners from both the Essex and the Surprise.

I have not been able to find out definitively on which of the two hulks my grandfather was imprisoned. However, knowing that he was tried at the Galway Assizes and that the Surprise held the prisoners from the southern and western counties I feel that I can make a reasonably considered assumption that he was held on that hulk.

[1] http://www.findingaids.nationalarchives.ie/index.php?simplesearchDescTxt ‘Ireland-Australia transportation base
[2] http://www.jenwilletts.com/convict_ship_st_vincent_1837.htm
[3] Except where noted otherwise, the details of the Hulks were drawn from Anne McMahon, “Floating Prisons Irish Convict Hulks and Voyages to New South Wales 1823-1837, Braddon and Ultimo, Halstead Press, 2017. Full references are available on request.