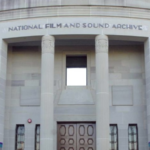 The National Film and Sound Archive of Australia (NFSA).

You know the feeling; the one when you find something and get that prickly scary feeling, and your eyes moisten for a moment. The hazy line between us and the past falls away just for a second. Perhaps you’ve been looking forever for that one link, that one record that solves the problem, or maybe it’s finally a blurry image of the one person that has eluded you for years. Well, imagine if that image is crisp and moving: walking, talking, smiling, staring right at you.

I’ve been researching early female pilots in Queensland. Our first ever licenced female pilot was Dorothy Reis. She was born in Charters Towers in 1901, to Thomas and Rose Bishop. Among the perks of Thomas’s stock brokering job in the gold-rich town, was driving the boss’s car – one of the first in Queensland.

Thomas and Rose only had two daughters, so Dorothy became as equally obsessed with cars and engines as her father, learning to drive while still a teenager. She often drove the long lonely stretch from Longreach to Winton ferrying party-goers and businessmen. Thomas was a man of the future. He was fascinated by aviation. Newspapers regularly published his enthusiastic and, to us now, profoundly accurate predictions of the usefulness of aircraft. He even formed an airline company to compete for the Brisbane to Sydney regular mail runs. 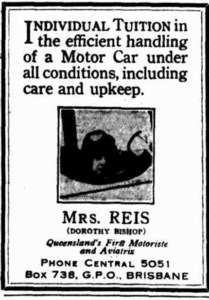 As early as 1920, newspapers reported that 19-year-old Dorothy was to attend a new flying school at Richmond, New South Wales. However, plans were in place for Richmond to become a military airfield for the new RAAF, and there was little likelihood that the flying school would accept a young woman. Dorothy moved on with her life, marrying Bruce Reis and having two children. After Bruce’s tragic death in 1927, she returned to her father’s home and influence.

In November 1927, Dorothy became the first woman in Queensland to qualify as a pilot, fulfilling Thomas Bishop’s hopes, dreams, and ambitions for his daughter. Thomas wasted no time using Dorothy’s image – blurry pictures of a short, round-faced girl, who rarely smiled – to promote driving lessons for young ladies. Frustratingly there were no other images to be found.

The following year Dorothy was one of six pilots selected to escort Smithy and Southern Cross into Brisbane after his epic Trans-Pacific crossing. She also competed in the Amateur Pilot’s Handicap at the annual Australian Aero Club (Queensland) finishing a respectable fifth.

Late 1929 Dorothy was joined in the air by newly qualified Eva Nisbet, a recently-divorced wealthy mother of three. At the end of May 1930, Dorothy and Eva accompanied by another new pilot, Dr Christine Rivett were selected to escort Amy Johnson into Brisbane after her record-breaking flight from England. 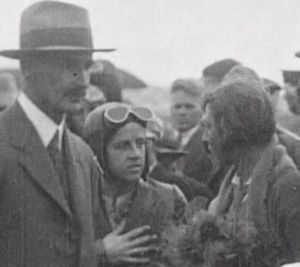 And here’s where it got weird! I didn’t know much about Amy Johnson so, I jumped directions in my research and headed off down another rabbit hole. Online searches turned up digitised films of Amy, leaving England, arriving in Darwin, and speaking of her adventures. Her arrival in Darwin signalled the official end of her record-breaking England to Australia flight, but she continued to Brisbane and other capital cities on a promotional tour. She crash-landed on arrival at Eagle Farm in Brisbane, and although Amy walked away unhurt, the aircraft was badly damaged. Some newsreels have edited out the crash. Determined to find the true story I kept looking.

Thanks to the National Film and Sound Archive of Australia, a surviving newsreel shows her overshooting the runway, hitting a fence, and overturning. As she walks unaided towards the camera, appearing by her side is a short woman, still in her flying helmet, to me, instantly recognisable as Dorothy Reis. She and Amy are deep in conversation disregarding the gathering crowd, as only two pilots would, discussing a near miss. It’s a few seconds, but it still gives me goosebumps every time I watch it. 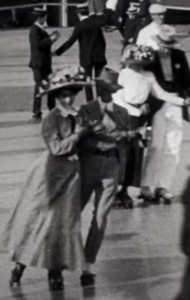 The National Film and Sound Archive of Australia (NFSA) is a treasure trove of digitised film, stills, and oral histories. Inspired by my serendipitous find, I hunted for other aviation snippets, finding Nancy Bird Walton discussing her early flying experiences giving me much needed clues to the operation of early aircraft. In a film of the 1936 Brisbane to Adelaide Air Race, there were images of Archerfield Aerodrome, the scene of many of my pilot’s successes and aerial views of Brisbane and Sydney. Towards the end of the clip were five women competitors relaxing in the shade of an aircraft wing having a chat; moving pictures of other women, who up until that point, had also been grainy lifeless images.

The possibilities for research at NFSA are endless. Oral histories provide rich details of daily life for our ancestors under a variety of conditions in diverse places; tiny details that put flesh on the bones of the story. Streets scenes depict long-vanished buildings and modes of transport. Moving images of people at work and play reveal how they negotiated those Edwardian and Victorian outfits. I found an extraordinary clip from 1910 of men, women and children enjoying a skating rink at South Brisbane. Couples tightly clasped each other moving in unison, swerving adroitly around other skaters. A still image can never display the intimacy revealed by the film.

There are also vintage advertisements and songs to revitalise our aging memories. Featured among the online curated exhibits are a selection from 6000 home movies, clips and soundtracks from John Farnham, Jimmy Barnes and Skippy, and collections of Women in Radio and Australians at Work. Everything to jolt those memories and spice up your memoirs.

And Dorothy? She gave up flying around 1935 and married Frank Dodd in 1937. Frank died on the Thai Burma Railway in 1943. During the war, Dorothy worked as a driver for the Americans in Brisbane. She died in 1968. And Thomas Bishop never did get that mail contract. I believe it went to a new company called QANTAS.