So often the stories of the quiet and selfless achievers are never told. They are the silent, conscientious people who do not look for fame or praise. Jane (Jeannie/Jinnie) Maxwell was one of these people. 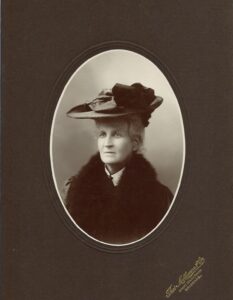 Jeannie came from Kyle Park outside the small town of Borrisokane in County Tipperary, Ireland. When she left Ireland to come to Australia in 1859, Kyle Park was an estate owned by the Stoney family which included ‘ a new and commodious house’ and a national agricultural school. Jeannie was a domestic servant so perhaps she worked at one of these places.[1]

She arrived in Sydney on the Alfred on 6 January 1860 as an assisted immigrant. She had made the three-month journey at the age of 21 with 430 other Government immigrants, including 121 single women, and they all arrived in ‘good health and ready to join their friends.’[2]

As an assisted immigrant, her passage was paid or subsidised through one of the many immigration schemes which operated between England and Ireland to NSW. Edward Boland is listed as depositing £4 to subsidise her passage. He could have been a family member or prospective employer.[3]

It is not clear what Jeannie did in the few years after her arrival although she may have joined her sister who was also in Australia. In March 1863, Joshua and Margaret Bell employed her as their nanny when their first child Joshua Thomas Bell was born in March 1863 at Ipswich, Queensland. It is through Jeannie’s years with the Bell family that I have been able piece together her story because as historian Noeline Kyle says, in order to find traces of women in history you often have to follow the stories of men or, in this case, families who were in the public eye.[4]

Two years after Joshua Thomas’s birth, William was born, also in Ipswich, and then Colin (my grandfather) in June 1867 and Lulie in December 1868 (dying in infancy) both being born at Harris Terrace, George St, Brisbane. Joshua had been elected to the seat of West Moreton in 1862 and when the slab house on the family’s property at Jimbour burnt down in 1867, he leased one of the six houses that made up Harris Terrace.[5]

Therefore, Jeannie would probably have spent most of the first seven years of her employment with the family in Brisbane until another house was completed on Jimbour in 1870. This was where the two youngest children were born, Oswald in March 1871, and Maida in October 1872. Jeannie now had five children to care for.

The family left for Europe and England on 12 November 1874 on the mail steamship Somerset. Their departure listed ‘Hon J P Bell, Mrs Bell and family (5) and 2 servants’ one of which would have been Jeannie. The trip would have been much more comfortable than the voyage she had taken fourteen years before on the Alfred. She may have been able to return to Tipperary for a visit.[6]

The family returned to Australia the following year and then, tragically, on 20 December 1881, Joshua Bell died suddenly in Brisbane. Margaret, his wife was also in Brisbane so Jeannie had the heart breaking task of telling the children and taking them from Jimbour to Brisbane for the funeral. Joshua was buried in the Toowong Cemetery with the funeral notices focusing on the pomp and ceremony of the occasion but very little on his grieving family.  Margaret, Jeannie and the children returned to Jimbour on what would have been a very sad Christmas Day.

After her husband’s death, Margaret decided to pack up and the family left for England on the Potosi on 2 August 1882. She had probably decided to educate her children in England but also ‘… a change of the kind was imperative, after the terrible shock inflicted by his [Joshua’s] sudden death at Brisbane a short time ago.’ Jeannie must have been a great comfort and help to Margaret during this terrible period.[7]

The family returned to Australia in 1889 and during the 1890s the Bells’ financial position deteriorated. Margaret Bell continued to live at Jimbour House with Jeannie and Maida. Jeannie was their constant companion which can be seen in a letter Margaret wrote to her son, my grandfather, Colin, after Maida had been very ill with an abscess.

I had a great dread of the risk of chloroform and so had Jeannie. It has been a trying painful time for all … no one here but Jeannie and I.[8]

During this period, Joshua Thomas Bell, was elected to the electoral district of Dalby in 1893. In 1903 he married Catherine Jones, a widow with two children and subsequently they had two children, Joshua Ferguson and Margot. Jeannie, at the ripe old age of 65, helped with the children. On 10 March 1911 another tragedy struck the family with Joshua Thomas dying at 48 years of age.

Margaret, Maida and probably Jeannie moved to Brisbane where Margaret died at the beginning or 1914. In July 1919, Jeannie was at the People’s Palace on the corner of Edward and Ann Streets in Brisbane. The Spanish flu had broken out in Brisbane that year causing 300 deaths and Jeannie was very ill when she wrote to ‘My dear Master Colin’.

I am just recovering from a bad turn of influenza of worst type. I am not out of my room yet but I get everything I want brought for me. I never had such a sickness before of course you read about it… I hope soon to get strong again as can sit up in my bed.[9] 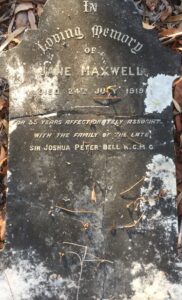 Sadly she did not get strong and died on 24 July 1919 with the cause of death shown as
‘heart weakness following an attack of influenza. The prayers at the graveside at Toowong Cemetery were read by Rev. H. Simmonds and the little knot of mourners included an aged sister and several representatives of the family the deceased had served so well.’[10]

For 55 years, the story of Jeannie’s life revolved around the Bell family. She must have got to know them better than any of their relatives or friends and been aware of many of the intimate details of their life. She was present for the children’s births, weddings and deaths. The family provided her with land selections and as their financial circumstances deteriorated, they continued to support Jeannie as best they could. She became part of the family, although not really part of the family always referring to the Bell children as ‘Master Colin’ or ‘Miss Maida’.

Sadly, Jeannie was buried a few hundred metres away from the Bell family grave in the Toowong Cemetery. Her epitaph reveals nothing about her except that she was ‘Affectionately associated with the family of the late Sir Joshua Peter Bell K.C.M.G.’

My father, Francis Bell who had never known her but would have heard stories from his father, always spoke fondly of her and I like to think she will always be remembered as:

Methodical, trustworthy, and motherly, she was an excellent type, and endeared herself to all who came within the range of her kindnesses. [11]