Within our Killyleagh siblings, the eldest two brothers John (b 1841) and Francis (aka Frank, b 1844) were likely responsible for the Irvine family coming to Queensland; they were the ‘trend-setters’.[1]&[2] On Saturday 13 May 1865, just as the American Civil War was in its final convulsions, they departed Liverpool on the modern clipper Melmerby arriving at Brisbane in September of that year.[3]

Part of Brisbane 1865 from Brisbane River.

It is not unlikely that John and Francis heard directly or indirectly, of the wonders of our State from Queensland Immigration agent, Henry Jordan’s colourful and effusive reports. Most residents of Northern Ireland were tenant farmers leasing from the local landowner so the lure of owning land was strong. However considerable courage was needed to set forth on a wooden ship for a journey of over three months across an inhospitable ocean to a new and distant land.The passengers were in three groups: saloon class, second cabin and steerage where Francis and John travelled. On arrival in Brisbane in September 1865 the details of the voyage of the Melmerby was written up in the Brisbane Courier.[4] 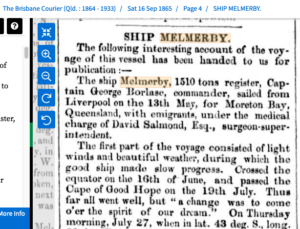 The ship was new having been built in 1863 and conditions on board were good for that era, with cleanliness and good order being extolled. The positive medical reports and the heartfelt vote of thanks to the medical officer Dr Salmon speaks volumes.  Entertainments, concerts and educational lectures were provided. There was a school and a library and also a weekly journal called the Melmerby Gazette.  The passengers were happy and it was a harmonious journey.

However, such voyages proceeded south to pick up the winds of the roaring forties. While sailing through the vast Indian Ocean at 8am on Thursday July 27, apparently with almost no warning at about 8:15am on a morning that promised fine sunny weather, the ship was engulfed in what they later believed was a whirlwind.[5]  Breaking the top of the main mast and consequently bringing down ‘the mainyard, main-topmast, topgallant and royal masts, also the mizen top-mast, topgallant mast, and all the gear attached; the foretopgallant mast, foretopsail yard, and all the gear belonging thereto, leaving the ship for the time being quite a wreck.  The deck was strewn with wreckage which had to be cut away and jettisoned and later a jury mast rigged. To make matters worse the ship then ran into a week of violent storms with the ship in a precarious position buffeted by wild, surging, frightening seas. Apparently the passengers remained calm and the captain, a seasoned officer, sailed the craft successfully out of danger. 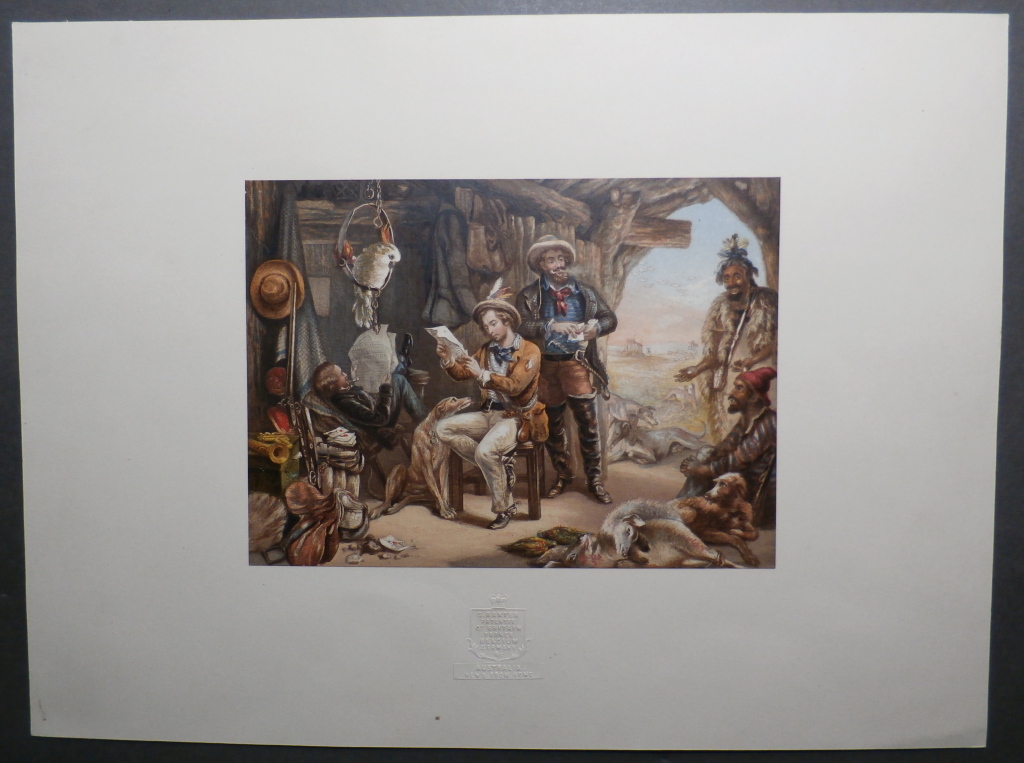 ‘News from Home’ painting by George Baxter. Permission to use received.

When John and Francis arrived in Brisbane they encountered a very primitive town, shown in historical photos. The current CBD area was crossed by two creeks fed from Spring Hill and there were marshy areas, particularly around the site of the current town hall, which was later built on a drained swamp. In 1864 a massive fire swept through much of Queen Street and reduced many of the primitive buildings to rubble. The population was small but growing rapidly and prosperity was in the air. Unfortunately for our two brothers that bubble burst in 1866 when there was a banking failure that heralded a financial crash. The economy slumped and was only revived by the discovery of gold the next year at Gympie, then known as Nashville. 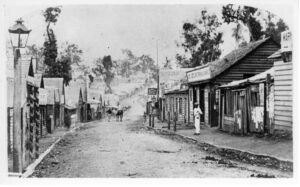 Gympie in 1868. Thanks to Gympie Regional Memories.

Thus it is not surprising that the lads visited the Gympie goldfields but presumably did not strike it rich, unless it was in commerce. Few did make money and the people who did well were mainly the storekeepers and butchers who provisioned the miners. Apparently Francis was still in Gympie in 1869 with an interest in the Glenmire Prospecting claim, as some years later in 1875, he testified in court over a dispute between others involving the claim, and his testimony was found to be trustworthy.[6]

In August 1871, at Annie Street  Fortitude Valley, Francis married nineteen year old Emily Julia Downs. Emily came from a family of English immigrants originating from Braintree in Essex. Francis and Emily had met at Jireh Baptist Church, this is possibly the reason Francis became Baptist as although the Irvines in Ireland had been regular Presbyterians for generations, many other family members joined the Open Brethren after their arrival in Brisbane.

Queensland, at that time, had relatively little industry. What business enterprise it did have was in shopkeeping, woodcutting, saw milling, mining and the pastoral industry. One of the by-products of the pastoral industry was soap, making use of every part of a slaughtered animal. Thus it it is not surprising to find Francis in December 1872 making an application to the Municipal Council of Brisbane to establish a small soap manufactory in Annie St. 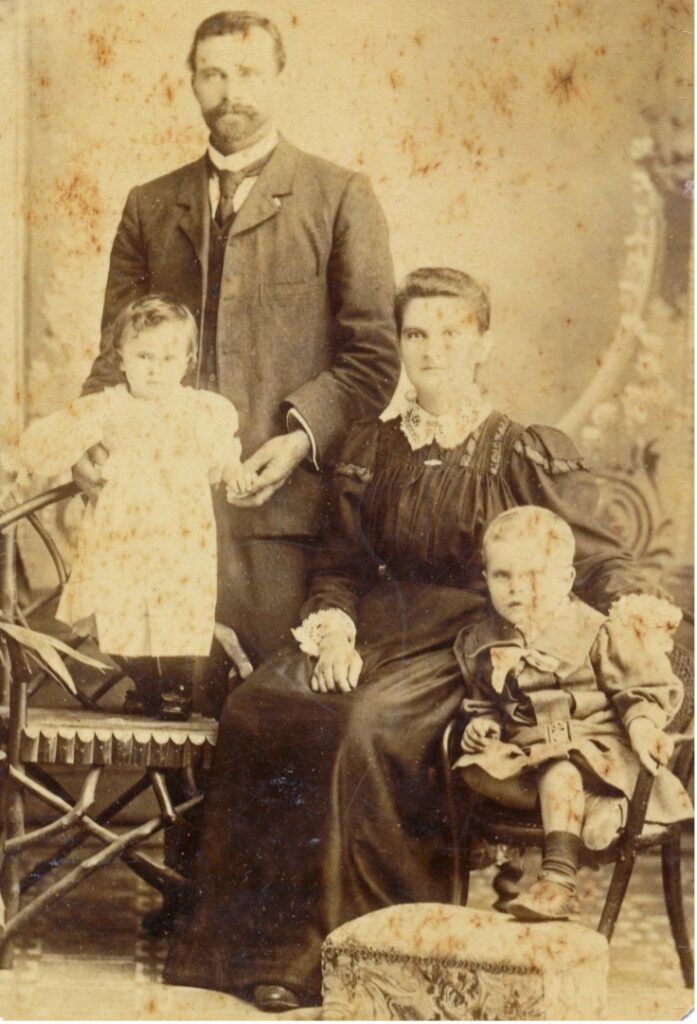 At some stage, the brothers had visited the Darling Downs and sent glowing reports of the fruitfulness of the land back home to Killyleigh. It was to Warwick, an important centre of pastoral activity, that Francis and Emily moved with their first child in 1873. This was a son Martin, who had been born in Brisbane in January of that year. In 1874 the couple had another son while in Warwick who they named Charles Robert, with his father Francis listed on the birth certificate as a soap boiler. The lovely photograph of the handsome pair with their infant sons has recently come to light.

By 1876 Francis and Emily were the proprietors of a grocery and drapery store in Wood Street, Warwick. Emily advertised her business in the local newspaper.[7] Both Francis and Emily continued in their Christian commitment and when they found that there was no Baptist church in Warwick, Francis rented a local hall, organized services and started a Sunday School.

Around 1883 for reasons that are unclear, the family moved back to Brisbane and settled in Nundah.  There on the corner of Boyd Road and Sandgate Road, Francis and Emily established a boot repair and drapery business. Again they were spiritually active helping to found the Nundah Baptist church in December 1884. The couple had initially established a Sunday School that included their children along with those of local aboriginal elder King Sandy with whom they were friendly. Francis was the first church treasurer.

Apparently Francis was often on the lookout for business opportunities. The Telegraph of 17 October 1892 (p4) recorded an auction of land at Pinkenba. The government steamer Otter provided a free trip for 200 men and women to participate. After a sluggish start the auction proved successful and the paper  noted that one of the buyers, Francis Irvine, purchase lot 19 for £34. His brother Robert also attended and purchased a lot of land at that auction.

Sadly, Francis did not live much longer as he died on 3 December 1895.[8] The cause of death was recorded as Phithsis Pneumonalis by Dr J.S Clowes who had visited him only the previous day. Phithisis was the older term for tuberculosis. Unfortunately the development of treatments for TB came too late to save Francis.  K.M. Smith organised his funeral which was conducted by Rev. A. Shaw on the day of death. Pall-bearers carried his coffin to the Nundah cemetery, where he lies in an unmarked grave.[9] Alongside him is his daughter-in-law, Martin’s wife Ellen Nourmahal Irvine, who died 28 Dec 1895, shortly after the birth and death of her baby.[10]  The Officers and Brethren of the Loyal Prudence Lodge (M.U.I.O.O.F) invited their members to attend the funeral of Francis. His will was dated just six weeks prior to his death with his estate totalling £863 bequeathed to Emily.[11]

His widow Emily , a woman of considerable industry, remarried in 1902 to the Rev Thomas Collins. She died in 1908 from the lingering effects of dengue fever which had ravaged the state three years earlier. Emily was deeply mourned throughout the local Nundah community for her devotion and her charity.