On 10 September 1813, my 4th great grandmother, Jane Ezzy registered her purchase of John Boulton’s share of a house and premises at 49 George Street Sydney for £10 sterling.[1] She had become a registered property holder in the centre of busy colonial Sydney town.

This entry adds more to my understanding of my first female ancestor to arrive in New South Wales. It reinforces my opinion that she was a strong and entrepreneurial woman, prepared, at 43 years old, to stand apart from her husband to make this purchase in her own name. After 18 years farming and raising seven children on farms in the Hawkesbury district, she determined that she would leave the farming community for a business life in town. William, her husband, having previously applied for a beer licence in Sydney, joined her for a time, but returned to his farm and community at the Hawkesbury.

The image is one of the entries contained in the nine books of the Old Register, which record land transactions and domestic legal matters from March 1802 until May 1824. Following the loss of earlier indexes, a complete digitised index was created between 1999 and 2008, and both the Index and Register Books made available on DVD. The State Library of Queensland (located at QCFS 346.944043 2008) and some university and school libraries hold copies in Queensland.

A second entry for Jane Ezzy is covered with sticky tape, making it unreadable. Despite this occasional challenge, each of the nine entries in the Register involving Jane, William, their son and daughters, or the transactions of their farmland, adds detail to the family story. In particular, when it is more difficult to find information about women, these entries are invaluable.

Transfer of property in Soldiers Row

A second personality from my ancestry is revealed through nine entries in the Old Register. Within months of his arrival from Cork as a life-term convict, Ormsby Irwin was registering a property transfer in Soldiers Row in the the military district of Sydney.[2] This entry shows that he brought with him, or quickly earned, money in the time left after his tasks as a convict were completed each day. The property included a garden, a valuable asset to provide fresh vegetables for his young wife, Eleanor, who accompanied him to New South Wales as a free woman, and their baby son, William. He was trusted by a member of the 102nd Regiment in the transfer and by the military in his residence among them. 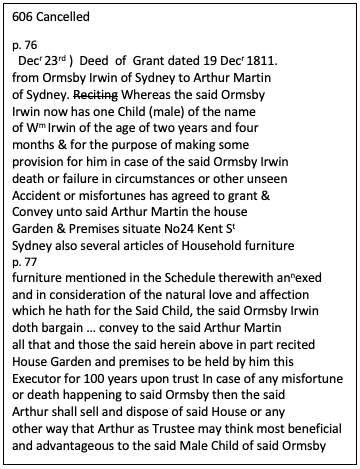 Despite the fact that another entry (transcribed above) from the register is cancelled without explanation, either reversing the transaction or deeming it illegal, it has provided me with a significant glimpse into Ormsby Irwin’s character, that is his concern for his son’s future. Regardless of the legal status of this deal, it seems that by December 1811, Ormsby Irwin wished to provide a benefit for his son, now two years four months old and had the knowledge to attempt a legal arrangement.[3]

At a time when so many illegal land and property transactions in the colony took place without any records, I am so glad these women and men had the courage to register at least some of their dealings in property. It has provided me with a deeper understanding of how they managed their unfamiliar and daunting new lives. Any family historian with early colonial families may enjoy similar revelations.