They say that every picture tells a story. My picture, the only one I have of my grandfather and his sisters, and its associated story was one of those featured at the February Writing Group meeting.

The simple caption ´Arthur Stirland, front centre, with sisters Edith and Emily, with their respective husbands Albert Hall and Joseph Evans – taken c. 1915-1919‘ does not do justice to the narrative that I wrote: 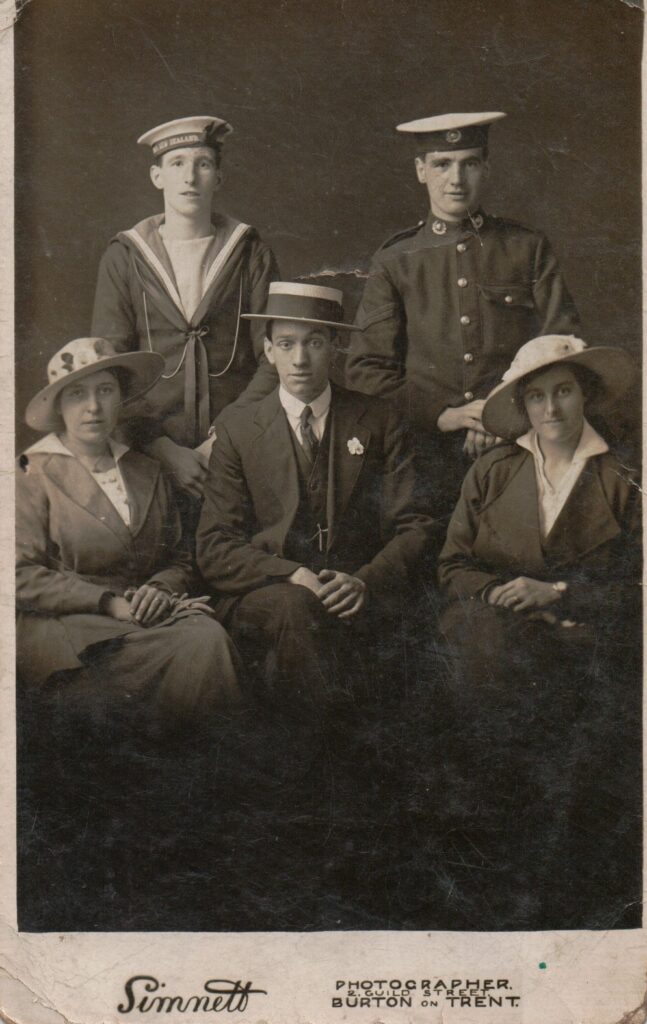 My paternal grandfather, Arthur Stirland, sits front and centre in this photo with his sisters and their husbands: the family resemblance is marked. He stares, goggle-eyed, unblinking, directly into the camera: make sure it’s a good photo! Mouth slightly open, his expression is almost fearful. In smart civvies, wearing a boater hat and a flower in his buttonhole – he’s nothing like the older man that I knew – maybe by then he’d been worn down by a hard life as a coalminer and a heavy drinker. Why were they all dressed up? It was unlikely to be the funeral of their father who died in April 1916 as this looks like a happier occasion, although none are smiling. Maybe it was when their mother remarried in 1919 at the Registry Office in Burton on Trent – after the wedding they popped into the photographer’s studio in a neighbouring street to have a record of the day. It was most likely earlier than August 1919 when Arthur married my grandmother Lizzie Kinston, as otherwise she might have been in the photo. Which sister is which? Arthur’s brothers-in-law had obviously both served in WW1; Arthur was in a reserved occupation as a coalminer. Was it the bootmaker or the miner who joined the army? With surnames such as Hall and Evans, there’s lots to choose from.

Writing Group members thought that Arthur looked quite vulnerable in the photo and suggested a variety of sources that I could explore to put more flesh around the image. I have since done further research; this is where I started my family history journey in 1987, but had left this close family in abeyance while I focussed elsewhere.

Why was a Writing Group examining photos you may ask?

For this meeting, the group was tasked to select a photo from their collection and then write a narrative with a maximum of 250 words. The idea was not to do a straight descriptive piece, but to consider what the photo was saying about the person/people – their character, the event recorded in the photo, the place where the photo was taken. The group was also asked to consider why they chose that particular photo and whether they learnt more about the individuals by (re)examining the photo in depth.

Many shared their stories and photos with the group during the meeting; we gained new insights from the way that others had written their stories and fresh ideas about how to incorporate photos and the associated stories into a family history in a meaningful way. For some it was a challenge to limit their story to 250 words – once they started their narrative, they wanted to tell the whole story. Writing a short narrative to be included in the family story was considered so much more informative than a brief caption. Everyone seemed to enjoy the exercise; for one member it was the first time she had ever written such a story.

Some were fortunate to have lots of photos in their collection, whereas others had only a very small number; this limited their options for this exercise. Choosing a single photo provided an opportunity to re-engage with loved family members, such as grandparents, and consider the backstory to the photo. We noticed items that are no longer in use, such as a 1930s style baby bottle; we were able to place a photo in time and place by learning the time that a train would leave – the shadows indicating the likely time of day. Examining the background of a photo rather than the family members in the foreground revealed a great deal about time, place and context. Strong family connections became apparent and generated memories about remembered and loved family members.

Including a photo and its associated narrative in a family story can help to move the story along, and also provide a break and relief from the facts. As a result of the exercise, some decided they would create profiles or cameos for the main players in the family rather than try to write a family story that included everyone.

So, if you are struggling with writing, choose a photo to get you started. Let the thoughts and memories flow – you never know where this exercise will take you.