↓
GSQ Blog→British Newspaper Archive→Joan Reese Memorial Short Story Competition 2015
I have previously encouraged GSQ Writing Group members, and anyone else who will listen, to start writing their family history. As my previous post about Christmas memories demonstrated, many images and thoughts come to your mind when you decide to write on a specific topic. Some of my other (unpublished) thoughts about Christmasses past highlight for me the value of writing my own story. What life was like when I was a child could be as alien to grandchildren, as my grandparents’ experiences are to me. On the weekend I was chatting to my mum, who lives in England, and she reminded me of some things about Christmas that I’d pushed to the back of my memory bank.
All these memories should not be considered in isolation. None of my childhood exploits made their way into the newspapers, but it is likely that accounts of bad winters, political and social unrest, as well as good news reports will add context to your stories, whether these be stories of ancestors or your personal story. Continuing on a Christmas theme for one more time, I found the following extract from the Derby Daily Telegraph of 6 December 1950 quite enlightening. Food rationing introduced in WW2 was still in place in 1950 and the main treats for Christmas in that year were tinned salmon and tinned fruit. I would have been too young to enjoy either of these, but articles such as these give a vivid insight into daily life, and perhaps explains why so many families, mine included, grew their own vegies and kept hens for the regular supply of fresh food. So it is well worth the effort to explore the pages of a vast array of newspapers and journals to find this contextual material. 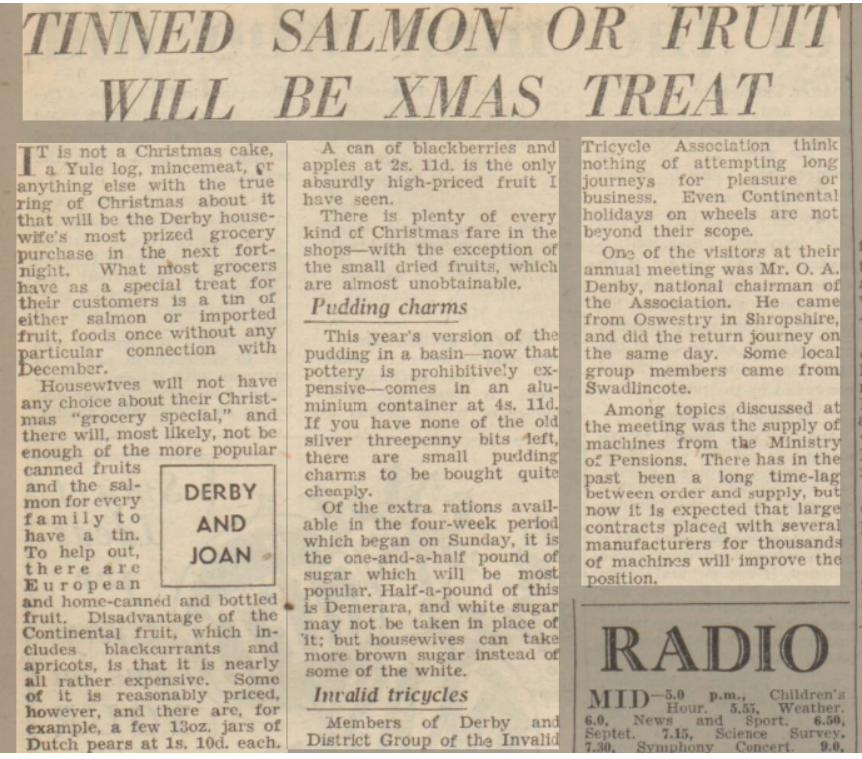 Most researchers are no doubt aware of the National Library’s Trove website (http://trove.nla.gov.au/) and the British Newspaper Archive available at their website (http://www.britishnewspaperarchive.co.uk/) or at FindmyPast (www.findmypast.co.uk). The Gale 19th century newspaper collection is also worth exploring through either the National Library or Queensland State Library.
I am highlighting these valuable resources as the recently announced topic for the Joan Reese Memorial Short Story Competition for 2015 is Newspapers: a treasure trove of information about ancestors. 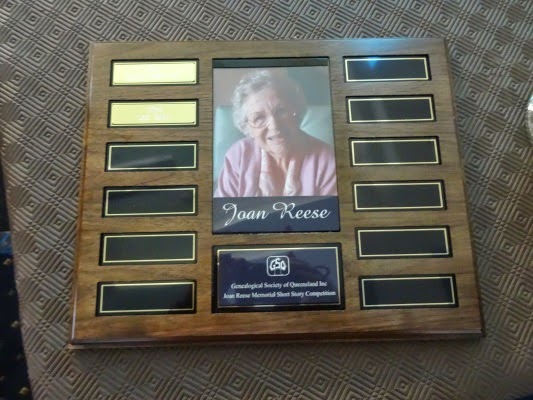 GSQs annual short story competition is named in honour of Joan Reese, former NSW Research Officer for the Society and a significant contributor to provision of access to NSW Colonial records. The competition has been run since 2011 and has produced some really interesting stories, which have subsequently been published in Generation, the Society’s quarterly journal, and also posted to GSQs website.
Geraldine Lee has won the competition twice: first with the story of her husband’s ancestor Sam Foo and two years later with the story of Sam’s wife, Kate Lyons. Elaine Lucas’s 2012 story of Mary Smith Benton: a Missionary’s wife was an inspiring story. The winner of the 2014 competition, which had a WW1 focus, was Sue Bell, From Westland to the Western Front. This story related the frontline experiences of former workers on a Queensland property through their letters back home.
The 2015 topic opens up a vast array of opportunities to write about how newspapers have contributed to your family history research, whether in Australia or overseas. Were your ancestors’ exploits discussed at length in the media? Did the stories portray the ancestor in a positive or negative light? I have found a detailed inquest report into an accident which claimed the life of an ancestor in 1865 as well as the one shown below, who is also related to my family. Jabez Dyche died at Derby Gaol, where he was a warder not an inmate. 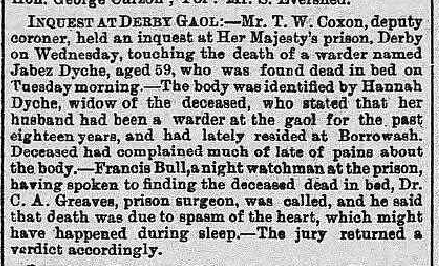 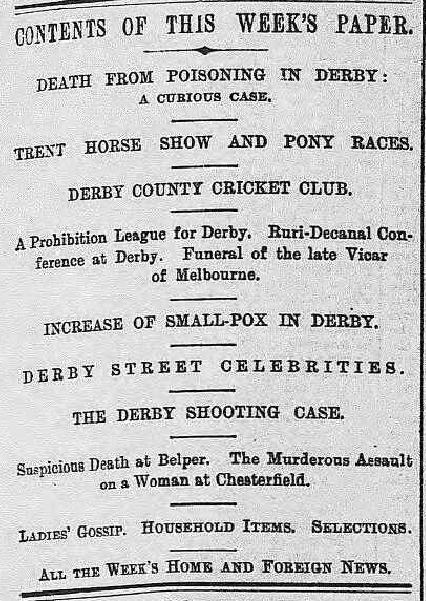 Regional newspapers especially thrived on local news, so you can find extensive reports of sports, leisure and other community notices.  As well, many column inches are full of family announcements such as births, marriages and deaths, together with detailed descriptions of weddings and funerals, the latter often accompanied by obituaries of well-known local identities. The impact of world events such as WW1 was felt keenly with details of those who had perished in the conflict. As with my examples given earlier, newspapers may be the only place where a detailed record of an inquest or a court case has survived. Were your ancestors in business? They may have advertised in the local paper.
Full details of the conditions relating to the competition can be found on the GSQ website at http://www.gsq.org.au/index.php/services/writing-competition. The Society is currently revamping the website and although the topic has not yet been updated for 2015, the conditions remain as for 2014. The prize is $100 to be redeemed for GSQ publications, membership, or research. The closing date for entries is 1 June 2015.
So, perhaps writing a short story to submit to the Writing Competition is the inspiration you need to get started on writing your family history. As one of the judges for the competition I look forward to reading lots of interesting stories.
Best wishes for 2015.
Pauline