↓
GSQ Blog→Dorfprozelten→Living with a Family Historian.

Wos’it like, then, eh? Wos’it really like? Living with a Family Historian (FH), that is. (Dropping poor Michael Caine imitation.) 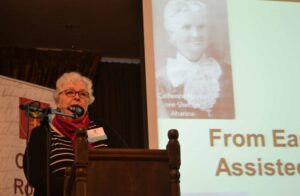 Herewith some reflections and anecdotes, probably somewhat muddled because they include events from Pauleen’s (aka the FH in question) pursuit of her family history, far more sporadic forays into mine, and the involvement of our daughters.

For Pauleen, the journey began in the mid-1980s, with an enquiry at the Genealogical Society of Queensland stand in an Historical Fair in George Street in Brisbane. Hooked forever! The first learning back in the Dark Age, was that 98% of everything was on paper. The wise FH was very canny about where and when she spent her hard-earned cash. If you needed a certificate, you couldn’t browse through multiple on-line sites until you were certain you had the right one and then one-click to download a copy. This meant thinking carefully what your research question was and telling your family all you wanted for your birthday, Christmas, Mother’s Day, the winter equinox, whatever, was the certificate at the top of your priority list. Followed some time later by explaining to our daughters that calling in at the Registry Office on the way home from school to collect the latest booty, was a Good Thing. Said daughters disagreed with this statement, but obliged the request regardless.

I gained practice at helping to decipher clergymen’s and BDM registrars’ chicken-scratch writing…is than an a, e or o after the Z? The most baffling came when the FH was collecting details of family members for her published family history. Was the poor child’s name really “Fishlee”? No, it was actually Ashlee. 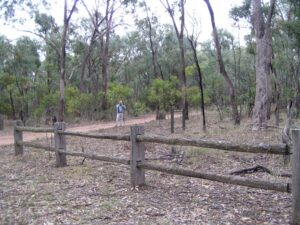 The FH, our daughters and I all came to know the smell and sound of dry grass crunching underfoot in Queensland cemeteries. We gradually evolved systems for team searches of headstones and learned not to be miffed when the other person found the very one we were all looking for. I learned not to be annoyed when it was pointed out that while the local history as revealed by clusters of graves might be fascinating, time was short and I needed to focus!! Also, in spite of concerns about nasty local residents, the very large recently-shed snakeskin was on one of my own family graves, not the FH’s. 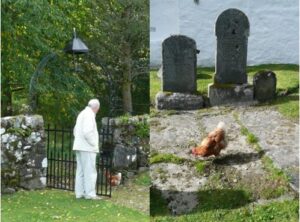 Escorting the chook out of Kilchrenan graveyard.

Other animals we have met along the way include the owl which hooted at Rebecca as it flew out of the pine tree in the Irish cemetery, not forgetting the gathering dusk. Its cousin in the cemetery in Nottinghamshire; the rabbit which erupted from under a gravestone in Bothkennar; the chook which followed us around in the Kilchrenan cemetery. And, just to show it wasn’t all cemeteries, the cat which talked to us, so it’s owner was willing to introduce us to the person who could tell the FH about her Courtown rellies. OK, so the rellies were dead.

“Grass Roots Queenslanders: The Kunkel Family” won two Family History prizes for best published family history of 2004.  The FH learned the publishing process and did it herself – a huge effort! I do still regret not insisting that she fly from Darwin to Melbourne for the awards night. The book was launched at the first-ever Kunkel family reunion, in Toowoomba near the Kunkel home at Murphy’s Creek. Another reason to be proud – without the need for any conversation, our daughters just quietly took over the running of the show on the day. 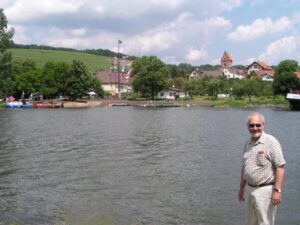 We did fly to the UK for Pauleen’s graduation ceremony for her on-line Oxford University Local History Diploma. Very swish evening ceremony in the Sheldonian Theatre, preceded by lunch with the other course members at the Randolph Hotel – where TV’s Inspector Morse took his pint. I distinguished myself by upending my fork and spreading gravy across the starched white tablecloth. However, I was very pleased that Pauleen got to meet the people she’d interacted with online in the wee hours of our mornings for the past twelve months.

The publishing process of the FH’s book and blogs have highlighted an increasing problem with the growth of the online world – far too many people think that if it’s on the internet it’s true, it’s free or should be, privacy and copyright is not fair and anyway doesn’t apply to me, it’s OK to grab anything you want because you’re entitled. Grump grump. 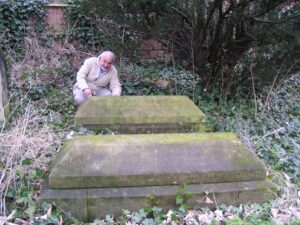 This hobby is not for the faint hearted! Family grave at Moorgate, Retford in Nottingham.

And Dr Seuss was right. Oh, the places you’ll go! Places you would otherwise have absolutely no reason to visit. The Forest of Dean, Rest and Be Thankful, or Broadford, for instance. Retford in Nottinghamshire, where we learned that my 3 x great-grandmother and her sister ran a school for young ladies for over 30 years, that their graves were side by side with their mother’s at St Saviour’s and where the congregation, hugely proud of their parish, swept us up for morning tea and wouldn’t let us go for hours. I quickly learnt that in so many cities there are wonderful museums and art galleries to keep you amused while the FH is buried in the archives. 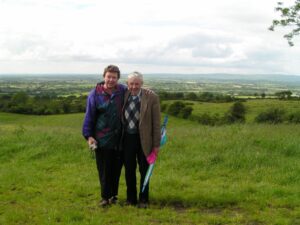 Pauleen and Paddy at Ballykelly in Ireland

The best bit is of course the people. The parish priest in Broadford, County Clare, who had retired from a lifetime’s work in Kenya and badly missed the sunlight and going fishing; he was delighted to talk to a couple of tropicals who understood. The cousin who directed me to drive up the Irish cattle-track to the FH’s ancestral land, laughing the whole time about what his neighbours would say about his riding in an English rental car. Pauleen’s cousins’ husbands who bought me a pint of Guinness (Guiness and I are not friends). When it was my shout and I asked for a half of beer, the lady behind the bar said “What are you, a handbag? You’ll be having a pint!” Then there was the time I was wondering why I didn’t understand the man in Ennis Registry Office – until I realised he was speaking to me in Irish! The former principal and historian of Dorfprozelten, the Bavarian village where Pauleen’s original emigrant to Australia came from, with whom we shared information in a mangle of English, German, French and my long-forgotten Latin. 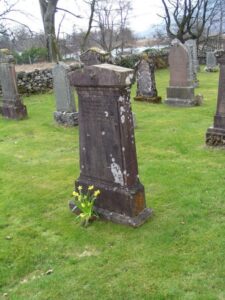 A huge plus is that the many genealogists and family historians I first encountered online via Pauleen’s connections, have become friends. This includes the American conference presenters and good sports who we introduced to Moreton Bay Bugs. Not to mention the fun we’ve had with drop-bears. The “cousins” who have decided that we are cousins and don’t want to be bothered with DNA in case we’re not cousins. The husbands of family historians who, like me, come to gatherings of family historians, so we have a fine time chatting amongst ourselves.

There’s Isabella, whom we haven’t really met because she’s the FH’s ancestor buried in Kilmorich churchyard, but we say Hello when we visit and once planted daffodils for her. I’d like to think they grew and flowered, at least for a while. My ancestors who made the poor choice not to be born on the Island of Easdale but in the much more prosaic mainland Parish of Easdale. Another reminder to pay attention to the detail on the certificates!

Oh, PS: the FH being miffed that the gate to the Bodyke cemetery was locked. Her simple solution was that I should drive the car close enough to the gate for her to stand on the bonnet, and then climb over the spear-topped gate. OK, I thought, but if you fall, do try to fall outside the gate because I’ll never be able to lift you over it! Fortunately, the only casualty was her trousers.