At our last Wednesday morning Zoom session, I asked members to write a short story just 200-300 words of a Christmas memory. This was an enjoyable challenge in our October Writers Group meeting also, and I realised it is a good way for any family historian to begin their own all important story. The suggestion was to also copy it to their genealogy software program profile page of themselves.
Hopefully following this, some of our newer members will also join our Writing Group and begin their writing in earnest. Remember, our family history is not all dates and facts but the stories behind each person.

Christmas Memories through the generations by Gayle Albert 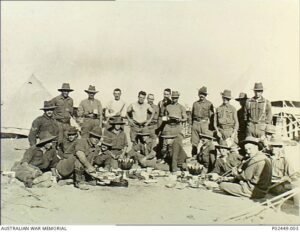 Strolling through the Christmas-decorated shops, seeking gifts to surprise my young grandchildren, I am reminded of an excerpt from Memories of a First World War Digger where author, Findlay Skinner (1897-1983), relates his earliest Christmas memories.
“Going back as far as I can remember, which is soon after the turn of the century, Christmas was for us a day of happiness and contentment. This was very many years before Christmas was commercialised with its many Father Christmases. There were no toys in those days and we did not need any. As “bush kids” we learned all the lessons nature could teach us; we could whistle all the bird calls and most of all we appreciated what our father and mother were doing for us.”
This is also the childhood Christmas memories of my parents with the exception that they were given one present, often a book.
When I think back, we received one main present and a couple of little ones, thou’ I enjoyed wrapping up the presents more. The Christmas feast prepared by Mum and Nana was set out on the large dining table and stayed untouched until Grace was said. On those hot Christmas days, we would eat the delicious hot food until our stomachs were so full that we rested all afternoon.
In my view, it’s my generation who spoilt the children’s expectations as coloured television presented the ‘must-have’ toys, books, and games daily. We had a large family so didn’t have the excess money to bend too much to pressure but many of their friends’ families did. Our Christmas Day was always a large feast with additional people to share.
Christmas gift shopping for grandchildren is hard as they already have so many toys and books given to them as soon as they are released throughout the year.  Have we taken the fun out of Christmas, or will they remember their childhood Christmases as a day of happiness and contentment?

Christmas celebrations for me were different to my friends and classmates who had large family gatherings at Grandma’s or Aunties with numerous cousins. On Christmas Eve my weary parents shut up shop and drove to St Kilda opposite Port Philip Bay for a traditional Christmas party with friends. Mum’s straw shopping bag held wine and three wrapped presents. We arrived to a wonderful feast, tree twinkling, music, dancing and much merriment. As the evening wound down, we gathered to give gifts to our own family, mine always a book and puzzles to keep me quiet until falling asleep in Gerald and Dotti’s big soft bed.
Christmas morning, I was up at crack of dawn excited by Santa’s visit. The neighbourhood gang gathered in the street to show off our presents, oohing and aahing over who got a new bike or Bride doll. Then it was time to dress up ready for Christmas lunch
At that time Christmas dinner was at the elegant Menzies Hotel; we would arrive to a dining room festooned with garlands, vases of holly and a grand Christmas Tree; a band playing jolly Christmas music. We knew several the guests so there would be warm greetings as the head waiter, resplendent in red jacket and tartan sash, ushered us to our table.  After a light entrée the waiters wheeled in trolleys with roasts of beef, pork and a ham, roast veg and lashing of gravy. There was camaraderie and a lot of chatting between the guests while we dined. The highlight was hearing the strains of a bagpipe down the hall as the huge flaming pudding on a large silver tray was piped into the dining room flanked by kilted attendants. That pudding was delicious and mine always had a generous number of threepences hidden inside. I didn’t ever see my father hand coins to the staff, but I am sure he did. The finale was the band starting up “There’ll Always be an England” as we stood to attention and sang with gusto.
I appreciate these Christmas’s a lot more on reflection although secretly I would have loved beach camping with my friends.

Mixed-up memories of Dolls, Trees and Chooks by Tricia Smout 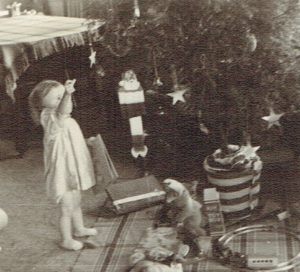 Having lost two children as babies, my parents were very protective of me and my younger sister. We were loved beyond belief, and so childhood was a very happy time. Christmases and birthdays were very special celebrations.
At Christmas we always had a real tree, and when I look at family photos, I can see that I was fascinated by the tree, although of course I don’t remember that far back!
Dad had purchased a holiday house at Scarborough, which he named “Eden”, even though it was really just a shack. We spent most weekends there, as well as the whole of the Christmas holidays. In early December Dad would drive us up towards the Sunshine Coast, and when we spotted a “suitable” tree beside the road, we helped him cut it down and load it into the car. Then its sawn-off trunk was ceremoniously encased in a bucket of wet sand from the nearby beach, and we spent hours decorating it. I still remember the smell of the fresh pine needles.
Our Christmas and birthday dinners were always a special treat of roast chicken and vegetables. In those days there were no ready-to-cook chickens in supermarkets. We had a chook pen in the back yard of our home, and they were like pets, but for these special roast dinners, one unlucky fowl was selected for the chopping block. After the killing ritual, Mum then spent hours plucking and stuffing the bird before cooking it in the heat of a Queensland summer, all to fulfil her daughter’s favourite meal request.
Now here’s the anti-climax of this tale …. The focus of this story was originally going to be the truly devastating tale of how we found out that Santa wasn’t real, because we had discovered some discarded dolls’ boxes hidden in the rafters under our house. But when I opened the old album to scan my dolls pictures, I read the neatly written captions that Dad had meticulously recorded, and so found out that our dolls were actually fourth and fifth birthday presents, not Christmas presents after all. How the mind plays tricks with memories!

“Twas the night before Christmas, when all through the house by Noela Rodgers 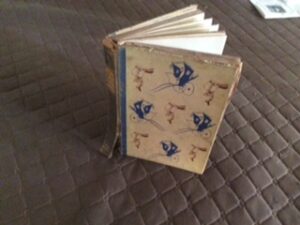 Noela’s copy of Black Beauty, torn spine and all.

Not a creature was stirring, not even a mouse”
I was eight years old and on Christmas Eve was put to bed at my usual time, about 7:30.  Excitement was high as this was the night when presents would be left at the bottom of the bed for each of the children.
Suddenly I was awake.  Nothing was moving, so surely it must be time for the sacks to have been delivered.  I was too afraid to turn on the light as my parents’ room was close.
I lay there for what seemed a long time and then I thought there was no sense waiting for morning.  I felt along the bed until I reached the end of the bed post, unable to feel anything that could be my pillowcase bag, I was inching my way along the bottom of the bed when suddenly there it was, the pillowslip bag.
I stopped to listen for any sounds of family, nothing.  Good. Now to see what was inside the bag.  Slowly, I slid a hand into the opening and started to feel the presents.  Not too large, some were soft and others hard. My hand rested on a box or that is what it felt like.  What could be in a box, lollies? Putting the box up to my nose, no smell at all, so it was not lollies.
Suddenly I realised that the present was tied up with a ribbon, so I carefully remove this and pulled at the paper, success.
Impatience got the better of me and I tugged at the box, but it was very difficult to open. Pulling at the box and trying to get inside continued until suddenly it gave way and out fell the contents.  A book. However, I was no further advanced as it was so dark there was no way to see the title or even the cover.
I slid the box back into the pillowslip and crept back to bed.
Next morning, I was scared to think what would happen when Mum and Dad found out that I had been inquisitive, I expected to be in big trouble. However, the look on my father’s face was the only punishment given to me.
The title of the book was Black Beauty and I still have it on my bookshelf, torn spine and all. 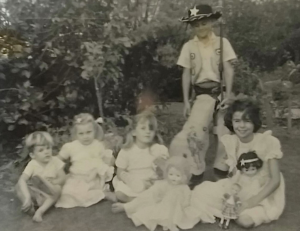 Catherine with her brothers and cousins on Christmas Day.

I loved the story “A Christmas Carol” by Charles Dickens. I remember seeing the book for the first time at the Everton Park Newsagent in the early 1960’s. It was a large book with beautiful illustrations of Ebenezer Scrooge and the visitations of the ghosts of Christmas Past, Present and Future. Naturally, I asked Father Christmas for the book and he obliged.
Talking to an Irish friend about her memory of Christmas, I surprised when she told me that her Christmas present was an orange and an apple. The meal was a boiled goose and vegetables, prepared by her mother and served with a beautiful gravy. Talking with others about their Christmas memories, I realized that not everyone has celebrated Christmas in the same way.
Looking back on my childhood in the 1950’s-60’s in suburban Brisbane, there were the religious services of Advent then Christmas Day. At home there was the Christmas tree and the presents left by Santa, followed by visits to our grandparents for the Christmas meals, which my brothers, just wanting to play with their newly acquired toys, always grumbled about.
My maternal grandmother’s place for lunch and my paternal grandparents for the evening meal, which was always roast chicken, roasted vegetables and plum puddings. The tables were bigger than they are today, often made of solid silky oak timber with solid chairs and plenty of room for family to gather around and there was room on the table for the extra treats like nuts, dried fruits, and the Christmas cake.
But Christmas is changing and also how we celebrate it. Families have changed, siblings marry, partners may not share the same cultural or religious traditions, relationships breakup, religious beliefs change. While I have tried to carry on the traditional Christmas meal, some have different ideas about Christmas and how to celebrate it. But when the day comes to an end, I am still glad I made the effort to bring the family together for Christmas. “Merry Christmas everyone”.