↓
GSQ Blog→British history→Moments in time: British ancestors in history
I recently presented a paper entitled Moments in time: British ancestors in history at GSQs mini-seminar Putting your ancestors in context. As part of this presentation I had developed a timeline of significant events in British history which probably impacted on our ancestors’ lives. Several attendees expressed interest in the timeline and so I distributed an extended version. The timeline may also be included in Generation.
When I was developing the timeline, there seemed to be some broad headings that distinguished particular periods of time. I summarised these and then focussed the majority of the paper on the period from the 1500s onwards. It appeared that this was when first the Church and then the State started to impose much greater controls over the country and, as a result, created records which help us to place our ancestors’ lives in context. I didn’t dwell much on the later Victorian and Edwardian periods as I felt that most people would be more interested in pre-civil registration and pre-1841 census times. There are so many more events that could be included in a timeline of British history, that some fairly obvious omissions are evident. 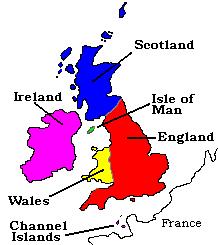 The broad headings defining different periods in British history were as follows:
•         The Romans – 1st century 55BC – 4th century 383AD
•         500s-1000s – Invasions – Angles, Saxons, Vikings, Normans
▫          1066 Battle of Hastings: England’s forces defeated by Norman invaders. William the Conqueror crowned king of England and permanently changed English language and culture
•         1100s-1400s – Middle Ages
•         1500s-The Tudors
•         1600s-1700s Political union and political upheaval
•         1800s Social and economic development
Many of us are familiar with the Tudors due to the extensive number of books, films, documentaries, etc. about Henry VIII and his six wives and Elizabeth I. Henry VIII was the king who severed ties with the Catholic Church in Rome and declared himself head of the church in England. This was the precursor to creation of parish registers in 1538. Elizabeth I continued and extended this requirement by introducing Bishop’s Transcripts (BTs) in 1598. Parishes transcribed their earlier parish register records onto parchment and began to send copies of these to the Bishop.
The 1600s and 1700s were a period of political union, yet also political upheaval. King James VI of Scotland succeeded Elizabeth as James I and thereby united the crowns of England and Scotland. This was not the end of the matter, though, as tensions remained between the two countries. These were still evident in 2015 with the referendum on whether Scotland should separate from England. Political upheaval came in the form of the Civil War, execution of Charles I, and establishment of the Protectorate under Oliver Cromwell. The monarchy was restored with Charles II in 1660.  In 1688 William III (William of Orange) and his wife Mary overthrew James II in what was called the Glorious Revolution. This probably confirmed England as a protestant country. Natural disasters included the Plague in 1662 and the Great Fire of London in 1666.
Initiatives which may help us trace early ancestors more easily included the introduction of Poll Books in the 1700s recording who voted and for whom. At the parish level, English replaced Latin in parish registers in 1733; the Julian (Old Style) Calendar was replaced by the Gregorian Calendar in 1752/1753, so that the year now started on 1 January. Care therefore needs to be taken with dates in this period. For example, 22 February 1752/3 = 1752 under the Julian calendar; 1753 under the Gregorian calendar. Hardwicke’s Marriage Act, effective from 25 March 1754 required all marriages, except Jews and Quakers to be conducted in the parish church.
Another event which had a significant impact was the American War of Independence from 1775-1783. One ultimate outcome was the beginning of transportation of convicts to Australia. Emigration, not only from Britain, but also from Europe, for political, social or economic reasons rose.
Significant changes continued in the 1800s but they could more accurately be described as social and economic development. Industrialisation proceeded at a rapid rate. The General Enclosure Act of 1801 provided a ready supply of cheap labour as many tenants lost traditional rights over use of common land. Parish relief for the poor and indigent was overturned by the New Poor Law Act of 1834 which led to the creation of large Union Workhouses. Parish recording of baptisms, marriages and burials still remained, but civil registration of births, marriages and deaths was introduced in 1837. The first peacetime income tax was introduced in 1842 and the ecclesiastical probate court system was superceded by the National Probate system. The 1870 Education Act provided for universal education and in 1880 the Elementary Education Act made primary schooling compulsory and extended it to girls. All these changes provide a fertile ground for records of ancestors.
War and colonisation feature predominantly in this century. Two major battles epitomised this: the Battle of Trafalgar in 1805 and Waterloo in 1815. The Boer War occurred at the end of the century. Extensive military records are available.
Economic and technological development included the introduction of passenger railways (1825); the establishment of the basis for use of electricity (1831); the first underground train in London in 1863.
Records created as a result of many of these events may be found in a myriad of repositories. The challenge is to extend your research as widely as possible. Some helpful repositories, which might lead you on to other sources, are as follows:
•         The National Archives (nationalarchives.gov.uk) via its Discovery search engine
•         County record offices – holdings can be found via Discovery if searches not limited to TNA
•         Genuki – www.genuki.org.uk – UK and Ireland Genealogy
•         Cyndis List – cyndislist.com
•         British History Online – british-history.ac.uk
•         Historical Directories – specialcollections.le.ac.uk and follow links
•         British Library – www.bl.gov.uk
Now out-of-print books can also provide a huge amount of contextual information. Digitised copies are regularly going online – sometimes you get the full text for free, in other cases you only get extracts. See what is available in the repositories listed above, as well as the following:
•         Google Books – books.google.com
•         Archive.org
•         Family History books – books.familysearch.org
•         Project Gutenberg – www.gutenberg.org/ebooks/
•         Hathi Trust – hathitrust.org
Contextual information is essential if you wish to write a family history rather than just record the bare facts relating to your ancestors. Do read Helen Smith’s February post to learn how to map your ancestors. It is also helpful to create a timeline for your ancestors’ lives. Taken together you will get a really good idea of how your ancestors lived and as a result create a really interesting family history.