The genes (ancestors) and I are taking a break from each other. A trial separation.

It’s not a sudden decision as I’ve been unhappy for some time.

This all changed after I retired in 2014.  Since then the intensity of the relationship has hurtled along at speed. At first, I didn’t mind as I’d be wanting to spend some time with them; learn more about them, tell their stories, bring them to life.

What I hadn’t expected was that I would become so obsessed with them.  I thought about them continually, I started to live their lives, my sleep was affected. I became antisocial as I spent hours every night either sitting at the computer or reading trying to find more and more information. Inevitably, at times, scurrying down rabbit holes.

I needed time out.

The genes disagreed. They want me to stay in the relationship. There’s this continual battle where they say, “you can do it” and I reply, “no I can’t, I need time out.” 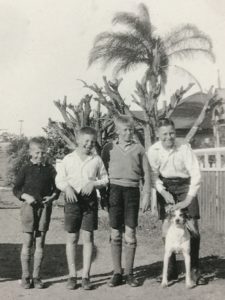 When this doesn’t work, they try the guilt game knowing full well that I will react. They taunt me by saying things such as, “you haven’t told my story or finished my story; what about talking about the women in the family etc, etc.”

When this happens, my anxiety level rises with the level of guilt.

Neville was one of four boys. He and his three brothers, Keith, Philip and Walter came from a close, loving family where their parents, Alan and Ida, enjoyed close friendships with their extended families.

As the result of this example, the brothers, their wives and children also had close relationships which exist until the present time. Of the brothers, only Walter (90) is still alive. His wife, Esther and Keith’s widow, Shirley (95) still phone each other weekly; a system that was implemented when all the brothers and their wives were still alive. Although now geographically separated, some cousins continue the practice.

The family is very fortunate that the ancestors were good record keepers of both oral and written material, including photographs. Stories about our fathers, grandfather, great grandfather and great-great grandfather are still told and chuckled about.  My father and his brothers were well known for their boyish antics when growing up in Taringa during the late 1920s to the late 1940s.

The family also hold several documents written by Jacob Frankel who first arrived in Australia in 1842; his son Philip, my great grandfather; and his son Alan, my grandfather.

One of these documents is a copy of a diary that Jacob (1812-1899) wrote about his life between 1825 and 1856. In this document, Jacob details his life from when he left his home in Breslau in Prussia, his overland journey to London and subsequent sailing with his wife and children to Tasmania.

It contains details of his life after his first wife, Sarah died in Sydney in 1847.  During the next nine years, Jacob sailed from Sydney to San Francisco and back. His diary is full of descriptions of his adventures during this time. It is a fascinating read.

Other documents that I treasure are the letters written by the individual fathers, including mine, before their deaths to their surviving children.

Reading these letters particularly from my father and grandfather bring solace and evoke wonderful memories.

In quiet moments, I wonder if I have done the right thing in insisting on a separation.

I miss the genes. We had some good times. I learnt a lot from them.

It was because of them that I travelled to Wellington and Dunedin in New Zealand. 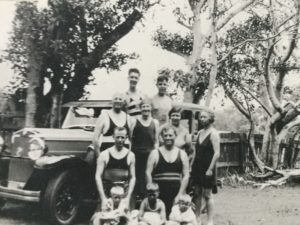 (In 1860, Jacob moved to Dunedin from Melbourne. It was here that my great grandfather, Philip was born in 1863.  In 1865, Jacob resettled his family to Wellington where he lived until his death in 1899).

As part of my research into my grandfather’s WW1 service, I revisited the Salisbury Plains in England and the WW1 battlefields in France and Belgium. This time though I looked, not as a tourist, but through my grandfather’s eyes and experiences and came away with a totally different appreciation and understanding.

I have always loved researching and finding out information; the how and why has always fascinated me. Delving into the past to bring the ancestors to life was a very rewarding if not frustrating task. Visits to the Australian War Memorial; the Archives in London, Wellington, Dunedin, Canberra and Brisbane; the libraries both National and State in these cities and towns were bliss.

The greatest gift that the genes has given me is that I understand myself more. Now I know from where traits such as being impulsive, strong willed, compassionate, loving and caring, ambitious and restless emanated.

I’ve found peace not only within myself but in some relationships. My grandfather was a very strict man.  My memories of him were mainly negative.  Now I understand why he was as he was. Looking at this relationship through the eyes of an adult rather than as a child has been very healthy.

I’m not sure how long the separation will last. I’ve asked for six months timeout.

Hopefully we can be reconciled but only time can tell.