…so far unsuccessfully, but research has unearthed the first of a long line of Parkers in North America – one George Parker born 1612 in Margate, Kent, England:
“Descendants of nearly all the most ancient and celebrated houses in England are to be found [in the United States]…New England colonies were founded by Parliamentarian refugees…Large numbers of emigrants from the counties of Essex, Kent and Middlesex settled in America…finally setting in Massachusetts, southern Connecticut and Rhode Island…most were well educated and possessed of property who, disgusted with the rule of Cromwell and his fanatics, sought asylum…from persecution and peril.
The first [Parker] who bore the name in England was a Norman, Johannes LeParker. He followed William the Conqueror and was keeper of the Royal Parks, whence his name [was] variously spelled Parkerre, Parkre, Parchour, Parker…William LeParker 1271, time of Henry III, had a grant of free warrant in all his land… in the county of Norfolk. Thomas LeParker lived in the reign of Edward III, 1327… from him are descended some of the proudest families in England, including the illustrious members of the familiy of Sir Thomas Parker, Earl of Macclesfield. Much of the ancient history of the Parker family will be found in Collins ‘ Peerage of England and, more recently in the excellent family history of descendants of John Parker, published by Mr Theodore Parker of Worcester, Mass.
The Parkers have been a patriotic race, and their names will be found in the records of the early Indian Colonial Anglo-French Revolution, and the wars of 1812, and of Mexico, and of the Rebellion of 1861-5.”
(Wm Thornton Parker M.D., Gleanings from Parker records: A.D. 1271 to 1893, <http://openlibrary.org>, accessed 17 March 2016).
Thornton mentions a published genealogy of the Parkers of Rhode Island (p.43) but gives no further information about the author, and I have been unable to source this book. But, in A genealogical dictionary of the first settlers of New England(James Savage, 1861, Vol. 3 p.350) there is a record of George Parker age 23, carpenter, sailing aboard the ship ‘Elizabeth & Ann’ bound for New England, arriving Massachusetts Bay 11 May 1635 (Passengers of the Elizabeth & Ann, Master Robert Cooper, Voyage of 1635 and Original Lists of Persons of Quality…who went from Great Britain to the American Plantations 1600-1700, John Hotten, Genealogical Publishing Co., Baltimore, Maryland, 1874, 600 pp). 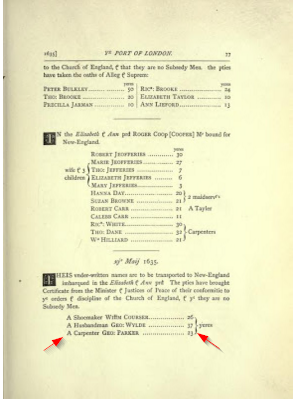 George Parker was one of about 90 passengers on the ‘Elizabeth & Ann’ bound for Massachusetts Bay Colony, including ‘subsidy men’ and indentured servants. During most of the 17th Century, indentured servitude became the primary means by which landowners in the colonies filled the nearly inexhaustible need for labour, initially paying to transport servants across the Atlantic but later enticing planters and merchants to incur the cost with the promise of land (<http://www.encyclopediavirginia.org/indentured_servants_in_colonial_virginia, Encyclopedia of Virginia, by Brendan Wolfe and Martha McCartney, accessed 4 April 2016).
And, in Turner’s History of Newport County, Rhode Island : from the year 1638 to the year 1887, including the settlement of its towns, and their subsequent progress (<http://openlibrary.org>, accessed 30 March 2016)  the political history of Newport seems to suggest a likely reason for George Parker’s decision to leave Massachusetts Bay for Rhode Island within two years of his arrival: “…there were men among the early settlers [Massachusetts colony] who held that English subjects had no right to organize a government of their own…[claiming] that no government could lawfully be erected…without the consent and authority of the crown.” George was amongst a number of political activists who believed that American colonists could not be adequately represented in England’s parliament because legislation enacted at that distance took no account of conditions in the colonies. Rhode Island colony was established by and for those who wanted representative government. George was arrested, tried and convicted of rioting and sentenced to “an hour in the stocks and fined 5 shillings” (Turner, op.cit.)
These opposing views – loyalty to the English crown vs the belief in the inalienable right of individual freedom – culminated in the American Revolutionary War between England and the thirteen colonies (1775-1783).  At the outbreak of the revolution, colonists loyal to the British crown (loyal at least  in part because they were heavily subsidised by England with equipment and free land grants, hence the name ‘United Empire Loyalists’) were obliged to fight against Britain or lose their homesteads. Following the Declaration of Independence on 4 July 1776, more than 8,000 United Empire Loyalists filtered into Lower Canada (Quebec). They were rugged backwoodsmen, fit for struggle on the frontier, who came through the upper St Lawrence valley along the north shore of Lake Ontario, eventually sending off-shoot settlements into the Ottawa valley, forming the nucleus of what would become the province of Ontario.  The map below demonstrates the proximity of settlements in Upper Canada (Quebec, Kingston, Queenstown etc) to those in upper New York State which made such a migration feasible. 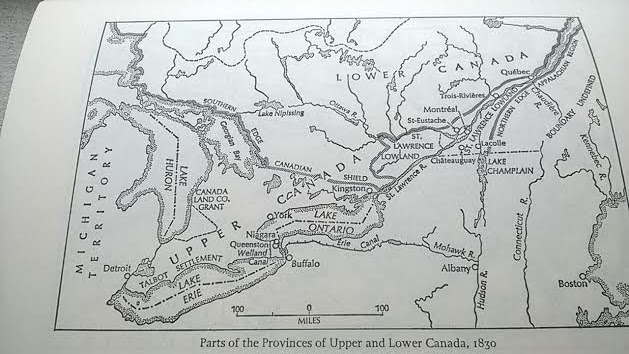 Robert James Parker (1762-1829), 3 times great-grandson of George Parker, was one such Loyalist. Born in Monmouth, New Jersey (Ancestry.com., Compiled Census and Census Substitutes Index, 1643-1890 Freehold Township 1785, accessed 2 April 2016), he relocated to Ontario in 1796 following the end of the Revolutionary War (Ancestry.com. Index, U.S. and Canada, Passenger and Immigration Lists 1500-1900, accessed 2 April 2016).  He died 17 October 1829 in Sorel-Tracy, Pierre-DeSaurel, Quebec, Canada.
As for George Parker, from 1637 until his death in 1656, he acquired sizable landholdings in Rhode Island and neighbouring New Jersey and became an officer of the court in Portsmouth, R.I. (Joseph Smith, Civil and Military List of Rhode Island, 1647-1800, Preston & Rounds Co., Providence, Rhode Island, 1900, p.3 – a list of all officers elected by the General Assembly from the organization of the legislative government of the Colony to 1800).

One of George Parker’s descendants, James Parker (1792-1852) was born in Grenville, Ontario and baptised in neighbouring St Andrew’s Presbyterian Church, Stormont  (LDS Family Search, Ontario Births and Baptisms, 1779-1899, film 928968).  In 1812, 19-year-old James was in upper New York state (across the Niagara River from his home in Grenville), caught up in  contentious religious debate over claims by Joseph Smith to have received divine direction to establish the Church of Jesus Christ of Latter-day Saints (Mormons).  James also found himself liable to deportation as an enemy alien when war broke out between the United States and Britain.  The U.S. Secretary of State ordered British sympathisers to report to the US Marshal’s office in New York City; James was one of a dozen ‘Loyalists’ returned to Canada between 13 November and 5 December 1812 (National Archives and Records Administration, Washington, D.C., U.S. Department of State, 1789-1815, War of 1812 Papers, 1789-1815, Marshal’s Returns of Enemy Aliens and Prisoners of War, 1812-15, Part 1).   He joined the United Empire Loyalists that same year (Public Record Office, Ottawa, Ontario,  Canada, British Regimental Registers of Service 1756-1900).  And he returned to Ontario a Mormon:  the 1851 Canada Census records his religion as ‘Mormon’; his wife Nancy and children Joseph, Nancy and Meriah were also Mormon (Ancestry.com., 1851 Census of Canada East, Canada West, New Brunswick and Nova Scotia, Ontario, Haldimand, Cayuga, Schedule A Roll C_11725 page 37 lines 5-9).

The adoption of the Mormon faith and the Mormon practice of polygamy in succeeding generations complicates the Parker lineage and the record of my great-grandfather’s birth. The hunt for the birth record of Melvin John Parker goes on.  I need a break.  And just a few more crumbs…