As another summer day dawned, exhausted Elizabeth lovingly attempted unsuccessfully, once again to entice her sister Harriett to take some medicine. During the long warm night, her patient had alternated between incoherent ravings and frightening stillness.

For a moment, she locked eyes with Honora Stewart who had been helping nurse Harriet for the last four days, the women exchanging a thought neither wished to express.

Born at the height of the Irish famine, Harriett Grant and her sister Elizabeth were two of the 2.5 million immigrants who departed the Irish port of Queenstown (now called Cobh) County Cork in the century from 1848 escaping poverty, hunger, and disease for a better life. They arrived in Brisbane in February 1866 after nearly five months at sea aboard the Bayswater. 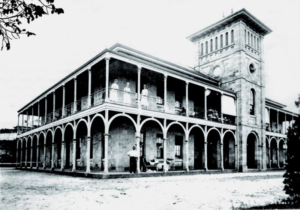 The new Brisbane Hospital on Bowen Bridge Road, Herston and first photo of the Hospital in 1867.

The voyage had been anything other than smooth sailing. Immediately on arrival at the first port, Rockhampton, reports reached the Emigration Depot of shoddy management by the Captain and First Mate, the systematic cruelty of the Second Mate and the shameful malpractice of the surgeon. More seriously, there were numerous accusations of sexual misconduct by the officers towards the single female passengers. Luckily for Harriet and Elizabeth, also on board was James Quinn, publican of the Prince of Wales Hotel, and resident of the German Station (Nundah), north of Brisbane. Loosely acquainted with relatives of the girls in County Armagh, James and his wife looked after them on the voyage.

Upon arrival in Brisbane, Elizabeth, one of the many who answered the frequent advertisements for housemaids, secured employment with Mrs Christina McCabe at Fairfield House, a hotel in George Street. The following year she married seaman, William Wilson. Harriet’s first placement was with solicitor Daniel Foley Roberts, a member of Legislative Council of Queensland, and resident of Shaftston House, after which she was in service at the Shakespeare Hotel in George Street. By January 1867 Harriett was a housemaid at John Jones’s North Australian Hotel in Adelaide Street, a decision which was to have disastrous consequences. 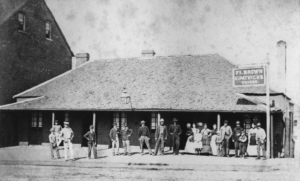 John Jones arrived in Brisbane from Sydney, with his wife Sarah Shields around 1856, taking up the licence of St Patrick’s Tavern, on the corner of Queen and Albert Streets. Married in Sydney in 1848, they had one son, William Antony born in 1853. Jones built the new North Australia Hotel in Adelaide Street and began trading in 1858. He also owned another hotel in Fortitude Valley and the North Brisbane Hotel, in Queen Street which was destroyed by fire in April 1864.

The collapse of several London banks in July 1866 plunged Queensland into economic chaos. Unemployment rose, and in September there were riots in George Street. Many mortgagers in Brisbane started calling in their loans, and some hotels changed hands, but the North Australian kept trading.

Sarah Jones died at the North Australian Hotel, the following October, leaving John with a 14-year-old son. Not a man to let the grass grow under his feet, four months after Sarah’s death, John married his young housemaid Harriet. Marriage to a well-known publican and prosperous property owner was an attractive option that blinded Harriet to her husband’s drinking.

Although the economic situation was improving, John’s finances were suffering and in October, he sold the hotel. His drinking worsened and according to Elizabeth, who came to the North Australian to help in the bar, Harriet had joined John in his commiserations, matching him drink for drink.

Elizabeth revealed that Harriett had developed a drinking problem early in the marriage, joining John in lengthy binges, sometimes never leaving their bedroom for days. “They had spirits of all kinds in the room. My sister used to drink whatever Jones did.” By December, both Harriet and John were desperately ill. Harriet had been in bed, vomiting and refusing food for a week before John joined her, similarly unwell.

Three days after her husband’s death, panicking, fearing she was miscarrying, Harriet sent John’s son William to summon Dr Hugh Bell. His examination showed her fears were unfounded, but he was worried about her condition. “She was thoroughly stupid and incapable of speaking incoherently.” He left medicine, telling Elizabeth to stop giving Harriet alcohol and advised that she was “in a very precarious state”. The best place for her was the hospital, but she refused to go. In denial about the state of her health, she continued to deteriorate, refusing food and demanding alcohol. “She was retching one minute and drinking the next.”

Sarah Jones and Honora Stewart, wife of an early licensee of the North Brisbane Hotel, had been close friends, and Elizabeth remembered Honora’s kindness when Sarah had died at the North Australian Hotel in October the previous year. Desperate to convince Harriet to go to the hospital, Elizabeth sent for Honora. Together they did their best to administer medicine and food to their unstable patient. 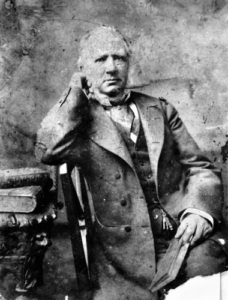 After a subsequent visit, Dr Bell said, “The patient was suffering from the effects of long continuous drinking.” He advised Elizabeth that he would not “come again as she had not followed my previous directions – that she [Harriet] would very probably die and to give her a chance of living she might when sent to the hospital.”

Dr Hugh Bell arranged for Dr Kevin O’Doherty, who also attended Harriet, to see if a final plea from local priest Father Connolly might convince Harriet to go to the hospital. Given her poor state, Dr Bell then considered that “he was done with the case.” Still, Harriet refused.

After a harrowing night with their now deranged and desperately ill patient, Elizabeth and Honora tried lifting Harriet’s gaunt frame once more for a dose of medicine, but this time, her head lolled to one side. Elizabeth screamed for someone to get a doctor, but it was too late. Harriet was gone—dead at just 22.

“She just turned back her eyes and fell back dead. She died without a struggle.” The next time Dr Bell called; it was to see Harriet in her coffin. A poor Irish servant girl’s story usually goes untold. Tragically, Harriet’s has survived, recorded in her inquest, related by her sister Elizabeth, and those who attended her in her last days. The findings of the inquest were that the cause of death was “exhaustion, following a debauch, accelerated by the want of proper treatment.”

Newspaper article stating there would be no magisterial inquiry into Harriet’s death. 17 Dec 1868, page 2 The Brisbane Courier

Elizabeth (Harriet’s sister) and William Wilson had four children, of which only Harriett Elizabeth born in 1868 survived childhood. She married Peter Lenman in 1893 and died in 1918. Elizabeth Wilson died in 1899. Her mother Elizabeth died in 1899. The effects of Sarah Jones, John Jones’s first wife didn’t pass to her son William Antony until five years after her death. The North Australian Hotel was sold in 1870 for £600, renovated and reopened as Tattersall’s Hotel.

The inquest provides information about Elizabeth and Harriet not easily found anywhere else.[1] It also reveals insights into the treatment and care of patients and the toll of alcohol abuse in early Brisbane.