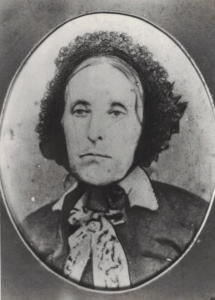 Annie Laird as an older lady

After researching my family history for about twenty years, I was given a photo of my great great grandmother, Ann Ferguson Laird. Seeing her image made me feel closer to the person, who, along with her first husband, James Porter, took the giant step to move their family to the colony of New South Wales in 1849. Ann’s photo shows a stern woman with thin lips. She is wearing a black bonnet with the image softened by what appears to be lace on the bonnet. She has a lighter coloured collar with a long tie fastened by a brooch. Ann died in 1900, and this photo was taken in her old age before people were encouraged to smile in photos. After seeing the image, my question was whether Ann was the dour Scotswoman she appeared to be. Writing this blog was an excellent opportunity to research this question.

Ann was born in Perth, Perthshire, Scotland on 13 March 1813 to James Laird, a weaver, and his wife, Isobell Lyell. She was baptised a week later in the Dissenting Congregation in Perth Depot in East Church Parish.[1] Only two other children have been found for James and Isobell, and they were David who was born and died in 1812 and George who was born on 10 September in 1815.[2] Twenty years after her birth, Ann Laird married James Porter in the East Church Parish in Perth. James was a weaver as was his father, also a James Porter, so Ann, the daughter of a weaver remained close to the weaving industry.[3]

Ann and James had eight children in Scotland. In January 1849, with their five surviving children, three of them under eight, Ann and James embarked on the challenging adventure of a lifetime sailing on the Scotia to Sydney in the Colony of New South Wales.[4] On arrival, the family found that the authorities believed there were too many immigrants in Sydney and offered to transfer the Scotia travellers to other centres such as Bathurst, Maitland, Goulburn, and Moreton Bay. The Porter family chose Moreton Bay (now Brisbane) and travelled by the Tamar up the coast to Moreton Bay, newly opened former convict settlement. It was in this remote settlement that the Porter family settled in for their new colonial life.[5]

The family comprised Ann and James: James, Alexander Elgin, Mary Elgin, my great grandfather Robert and baby William. The family made good connections in Moreton Bay with James and his two elder sons, James and Alexander Elgin, working for the well-respected Petrie family in their construction business.[6] On 29 December 1851, Ann gave birth to her last child, George Campbell Porter.[7] For the Porter family, their first decade in Queensland was a mixture of good and bad. In September 1851, before George’s birth, Ann’s husband and eldest son, James, headed off to the Victorian goldfields with Andrew Petrie.[8] This left Ann, her daughter Mary and sons, Alexander Elgin, Robert, and later baby, George, at home alone in a growing colonial town that was not known for its law and order.[9] 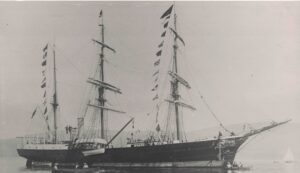 The sailing vessel Scotia. Image from the State Library of New South Wales.

It was two long lonely years for Ann before the Porter men returned from prospecting, arriving back in Brisbane in December 1853. In 1856, James senior purchased 130 acres on the west bank of the Brisbane River, upstream from Bremer Junction, in the parish of Chuwar near Ipswich. The family moved there the following year. About seven years after leaving Scotland, the Porter family now owned land.[10] However, things were to go downhill for the family as on 30 March 1859, the year Queensland became a separate colony, Ann’s husband, James, died of heart disease at Bremer Junction.[11]

At the age of forty-six, Ann was a widow with five sons and a daughter. Around 1868 Ann was the licensee of the Prince Alfred Hotel, which was part of her home on the Warwick Road between Drayton and Eton Vale on the Darling Downs.[12] However, Ann appears only to have stayed there for a short time and there was more sadness as it appears Ann’s son William disappeared sometime in the 1860s. William is last identified by family historians when he was a jockey in two horse races in December 1861.[13] His disappearance was difficult for Ann, who is said to have sought news of William all her life. Nothing more was ever heard of him.

Ann married again on 31 December 1870, at North Ipswich, to former convict, Robert Bland.[14] Robert, also a Scot, was transported in 1833 for uttering forged notes. He was a friend of the Porters and was a witness at the burial of James Porter.[15] By the time of his marriage, Robert, a farmer, had no further blemishes on his record. After the marriage half of the Porter land was sold in 1872 with the other half sold in 1880.[16] Ann and Robert were only married for twelve years when Robert died on 22 August 1882 leaving Ann a widow for the second time.[17] After this second bereavement, Ann appears to have moved to North Branch on the Darling Downs sharing her time between the family homes of her eldest three sons, James, Alexander Elgin, and Robert. 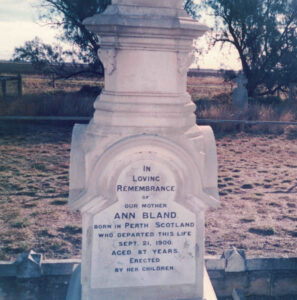 Ann died aged eighty-seven at the home of her son Robert on 21 September 1900. Her death was caused by a stroke, and she lived for seven days after the stroke.[18] Ann had lived over fifty years in her new home of Queensland, and although she lived to see the turn of the century, she did not see Australia become a federation in 1901. Ann died surrounded by her children at the time of her death, and her obituary in the Darling Downs Gazette recorded thirty-four grandchildren and twenty-three great grandchildren. Her funeral was the longest ever in the district, stretching for three-quarters of a mile. Ann was buried at the North Branch Cemetery, where her three sons and their wives later joined her.[19]

Was Ann the dour lady shown in the photo? She had much sadness in her life, but she appears to have made the best she could of her life and was not bowed down by tragedy but continued to live a full life. Ann died a respected pioneer.

Thanks to Porter family historian David Laidley for his assistance in researching Ann.