My grandmother bet on the horses. The evidence was discovered when her failing health and memory dictated a move into full-time care and family members were shocked to find not sheets and towels in the linen cupboard but thousands of betting slips. This sensible good-natured woman gambled? How to explain it? Mid-life crisis? How did anyone not know? I can explain my ignorance, having never opened her linen cupboard. 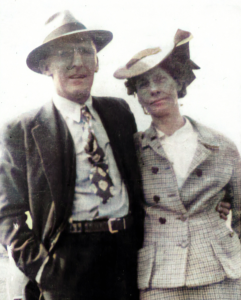 Mamie – the nickname she preferred – was born at a time (late 19 Century) and place (rural Ontario) that ensured her life story would be shaped by historical customs and beliefs that denied women the ability to consider alternatives other than marriage and children. Until recently I had put aside the unexpected revelation of her secret gambling until I looked at her marriage records and realised that she’d hidden more than betting slips …

Mamie’s first husband (my grandfather) died when I was in the cradle. My memory of the mournful tenderness in her voice when she spoke of him was enough to convince me that he was her one and only. A photograph of the happy couple, on the occasion of my parents’ wedding, papers over what the documents reveal:  he turned his hand to any – and everything to support his family, crossed the U.S.-Canadian border several times to find work, relocated the family when he found steady employment in Detroit, purchased a home and then, like millions of breadwinners during the Great Depression, defaulted on mortgage payments. But he saved the home and kept the family together, until a traffic accident claimed his life. Mamie found work in a hospital diet kitchen; her daughters and sons-in-law (all living nearby) offered help and support to 47-year old Mamie who, it turns out, wasn’t alone for long …

Her second marriage in April 1943 was a previously unknown an inconvenient fact revealed by divorce records. It was doomed by his alcoholism and violent disposition (he may also have introduced her to the race track, but there are limits to the detail provided in vital records). Never previously married, he lived with his parents and siblings on Detroit’s near east side, conveniently close to the home of recently widowed Mamie. Who knows whether his parents thought it was time for him to leave the nest, whether she felt trapped in menial work and desperately lonely? Within a year she filed for divorce; a decree nisi was issued October 1944 and 14 months later Mamie embarked upon a third marriage …

In December 1945, Mamie married a Danish immigrant employed in the radiology department of the same hospital where she worked. He brought to the marriage an eight-year-old son (his first wife died following the birth) and chronic rheumatoid arthritis that would eventually disable him. During my ‘teen years, I helped Mamie with housework (and might have discovered the secret of the linen cupboard save for the fact that clever Mamie put out fresh towels and sheets for the weekly clean). The dates on the betting slips indicate that about this time, Mamie began regular visits to Highland Park race track, a 30-mile bus trip from her home; she did not drive, nor could she ask for a lift from family members if her visits to the track were to remain secret. Their modest home and lifestyle (no lavish furnishings or appliances, no exotic vacations) suggest that her bets were small, her wins likewise, and infrequent. Weekly excursions to the track must have offered a temporary reprieve from what may have been a less-than-satisfying job in the diet kitchen, with the added responsibilities of caring for an invalid and rearing a child (which she did single-handedly after the death of husband #3 in 1963. Mamie visited the track at least once a week for at least another decade. Incomprehensible, but for a distant memory that comes to mind now …

It’s summer, the day of the annual family reunion in Ontario; 30 or so families who live either side of the international boundary between Canada and the United States gather at a park alongside Lake Huron. For my family, which usually includes Mamie, attending the reunion requires that we drive to Port Huron, cross the Bluewater Bridge to the Canadian border crossing where we are asked two questions: where were you born and how long do you plan to stay in Canada? Each year we answer ‘Detroit’ and ‘just for the day’. I (ten years old and self-righteous) know that Grandma was born on a farm in Canada; and each year I am affronted when she lies about her birthplace; in my defence, I was also ignorant of the consequences of attempting to deceive immigration authorities. Each year I tell Mamie she ought to be truthful, and she tells me that she knows I won’t dare risk turning in my own grandmother. We play this game as we enter and exit Canada each year, until the year I blurted out ‘GRANDMA WAS BORN IN THAMESVILLE’.

Pandemonium in the car, consternation on the face of the border guard, gasps from my mother, and Mamie’s shrill laugh (a cry for help?) as she tells the guard that the child is playing tricks, has a vivid imagination (true:  I was imagining all sorts of dire repercussions, for myself). But the danger passed, the guard waved us on. Mamie had pulled it off again. And never again did she cross the border with my family.

I know now that Mamie’s birth certificate was destroyed when the Thamesville town hall burned to the ground. She could have applied for a replacement certificate, thereby avoiding the risk of an illegal border crossing, so the mystery becomes why she didn’t do so, unless the thrill of illegally crossing the border spiced up a somewhat pedestrian life, a thrill later duplicated by clandestine betting activity, the anticipation of a win and concealment of the evidence. She was managing her life by escaping circumstances she could not change. The whole of her experience – the untimely death of a beloved husband, a chaotic second marriage, the effort of caring for an invalid and guiding his son to maturity, much of it against the backdrop of a world war – suggests that Mamie was in need of an escape route. The route she chose was a pastime that turned into addiction and, if the duration and secrecy of a behaviour are the hallmarks of addiction, she was hooked. The date on the last bundle of betting slips indicates that her visits to the track ceased by the mid-1970s. Perhaps by then the cumulative stressors of her life had eased.

Having left the United States decades before she passed away, I can only speculate as to why Mamie took a different path through the remainder of her life, but certainly she was ill-equipped to fashion a satisfying life independent of a marriage partner, opting for a second and then a third marriage, neither of which conferred unalloyed joy. She was not emotionally robust nor educationally equipped to choose and enjoy independence, opting instead for serial matrimony – not unique for women of her time. Throughout her life she was kind and loving and taught those virtues by example. And she made the best cinnamon buns I’ve ever tasted.