↓
GSQ Blog→"Find your Soldier" project→The Value of a Photo
Last week I found a photo of my grandfather taken when he was 25 years old. I came upon him suddenly after an afternoon of searching. I felt a shock of instant connection as I saw family resemblances and recognised my uncles and my mother in his features. Even though he was not looking directly at the camera I could see a far away dreamy look, even a sadness, that startled me. It was a look that I instantly recognised. My mother and some of her brothers had this same look. 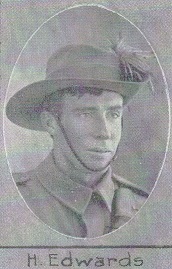 This is no ordinary photo. This is a photo of my grandfather James Henry Edwards ( Harry) taken at the Enoggera Army camp in Brisbane prior to his leaving to fight in the First World War.
I found the photo at the State Library of Queensland. The State Library has a project called “Find Your Soldier”. This is part of their commemoration of World War 1 called “Q Anzac 100 – Memories for a New Generation”. The “Find Your Soldier” project is available to everybody and can be accessed by attending the State Library or accessing the project online. This project allows you to locate a soldier relative by searching the One Search facility in the library catalogue. You can do this from your own computer or you can visit the library and do your searching there. The family history section at the library has a list of names of the soldiers whose photos have been digitised. If you find the name that you are looking for the catalogue will then direct you to the film that has the newspaper with the particular photo. When you locate the photo you want you can print a copy.
During the First World War a photographic studio was set up at the Enoggera Camp and photos of the soldiers were taken before they went off to war. These photos were then published in the Queenslander Pictorial which was a supplement to the Queenslander newspaper. My grandfather’s photo was published on the 16th January 1915 even though he had already left Australia a few weeks earlier. Almost 27,000 Queensland soldiers had their portrait taken in this way and published in the Queenslander, however, this was only about half the number of Queenslanders who served in the First World War.
Harry joined the Australian Imperial Force on 12th November 1914 as a member of the 5thLight Horse Regiment and embarked from Sydney on 21stDecember 1914. He was overseas for the duration of the war serving at Gallipoli and in Egypt and Palestine. He returned to Australia on 26th December 1918. I never spoke to my grandfather about his experiences in the war. From the very little that was said to me by my mother I gained the impression that he did not want to talk about it. My mother told me that it was said by his family that before the war he was a happy man who was always whistling but when he returned from the war he did not seem to whistle any more. My uncle once told me that when he asked his father (Harry) why he made the decision to go to war his father replied that they all thought they were going off to have a big adventure.
The photo shows Harry in his tightly buttoned uniform with his slouch hat and its signature emu plume set firmly on his head, black hair showing beneath the brim. His long distinguished nose and firm mouth are prominent but it is his eyes that I find so arresting. They look sad and weary. He cannot possibly know what is ahead of him and I am surely reading too much into what I see or what I think I see. I am looking at this photo with the benefit of 100 years history behind me. I can’t possibly know exactly what happened to Harry when he was away at Gallipoli and beyond, but history has given me a very good understanding of what it must have been like. Maybe he looks sad because he is leaving his family and loved ones. Maybe he looks weary because he has spent his life in the harsh western Queensland climate working as a stockman from a very early age because his father died when he was only 7 leaving his mother with 6 young children.
I did not know my grandfather very well. We did not ever live in the same town and he was 61 when I was born. To my young eyes he was always “old”. So, to find this photo of him taken when he was a young man is invaluable to me. I will never know what he was thinking when the photo was taken, I can only imagine. But I can piece together the story of his life from documents and facts and family stories and look into that young man’s face and see the family resemblances and know that his story is part of my story, too.