↓
GSQ Blog→German shipwrecked sailors→The Wreck of the Undine 1900: is your German ancestor here?

The Undine, a German barque, built in 1867, owned by Messrs. Wachsmuth and Krugmann, of Hamburg, was bringing heavy timber from the west coast of North America to Falmouth, England.  She was bound from Selina Cruz, Mexico, when she sprang a leak mid-ocean. On 10 March, it was apparent the Undine was sinking despite the best efforts of the crew, who then abandoned the vessel filling two boats, eight to each one. Such a departure from the vessel was reminiscent of that from the burning Fiery Star in 1865. The loss of passengers and crew near the Chatham Islands from that ship carrying passengers from Brisbane haunted Queenslanders and others with horror for the rest of the 19th Century. The two boats and their occupants, many known to Queenslanders, were never seen again despite extensive searching. Those who stayed on board were eventually rescued.

The Undine’s two lifeboats became separated in the wild seas and were adrift for three days. The Oakhurst found and rescued the boat with the captain and seven crew who said that the other boat of German seamen was southward. Near Tristan d’Acunha, the Oakhurst encountered the Benares and wanted that ship to search for the Undine’s other boat but the Benares misunderstood the signalling. The Oakhurst then searched for the other boat fruitlessly. As news reached the world, concern was raised about what happened to the other boat of German seamen. Eventually it was found that the English barque, Sita destined for Brisbane collected them on the same day. The vessels arrived at their different Australian ports within a week of each other.

German sailors, operating between North America and England unexpectedly found themselves in Australia, rescued on the same day and safe against the odds. Instead of an expected disaster, this was a “romance of the sea.”

In Brisbane, it was a cause for celebration and a social gathering. The secretary of the Seamen’s Mission (Mrs. Proctor) presided, and Herr Von Ploennies (German Consul) and Mr. Euart (first mate of the ill-fated Undine) also occupied seats on the platform. Seamen organised a collection to help the stranded sailors. Herr Von Ploennies thanked, on behalf of Mr. Euart and the sailors, their good friends, and said “they felt they were not strangers in a strange land after all the kindness shown them.“ Drinking and singing filled the evening.

The joy of the rescue was also celebrated in a photo of the German crew in Brisbane. Each was named. Arrangements were to be made to return the shipwrecked crew to their German home but we know at least one sailor settled in Brisbane. 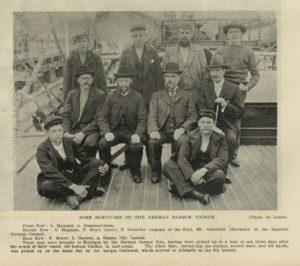 Do you recognise any names or faces of the men in the picture? We would love to hear if you do.