↓
GSQ Blog→Dalrymple→Treasures in the Trove

Have you ever been sitting in a library or an archives reading room when the silence is deafening?  You know, the sort of atmosphere where people’s breathing and the sound of lead pencil on paper seems loud, almost raucous?  Then…you hear the sound of tearing paper and it echoes throughout the room.  Looks of disapproval spread across the faces of the staff and the more experienced researchers and their sharp intakes of breath communicate in no uncertain terms that the rules of handling records have most definitely been transgressed.

Such was the situation in which I found myself while researching this month’s Treasures in the Trove.  I reached into the pale blue cardboard folder for the family tree chart simply designated ‘2.  Templeton’.  The side of the paper I first saw was lined alternatively sky blue and cream and each line was numbered from 1 to 60.  There were a series of small holes running down two opposing sides of the sheet.  I couldn’t believe it!  The compiler of the chart had used the back of paper specifically made for the old dot matrix printers.
The ripping sound I heard, okay, I confess I made it happen!, was a tear along the line of perforation separating two pages.  Thankfully, in this case, the tear was only a small extension of one that already existed and no one else was aware of my indiscretion.  No information was lost or obscured, so the Templeton/Gormley family tree will survive somewhat intact! 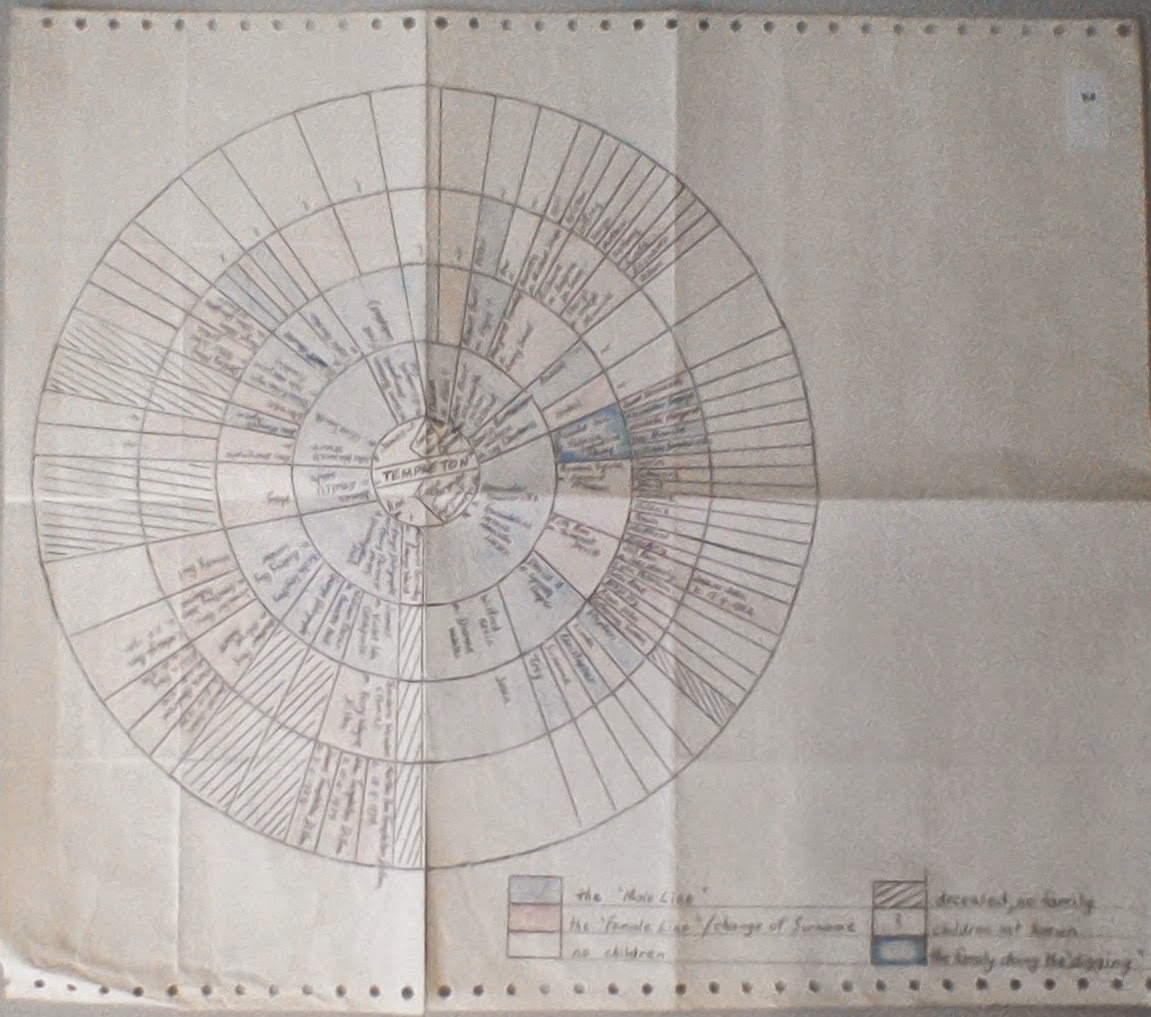 When I unfolded, VERY carefully, the 40cm square, a circle family tree chart, neatly hand drawn, met my eye.  The person who drew it created their own legend and colour coded ‘the Male Line’ in blue and ‘the Female Line/Change of Surname’ sections with a beautiful shade of pale pink.   The branches of those ancestors who had died without having children were marked with a series of diagonal lines and those designated as ‘children not known’ with a question mark.  I do confess that my favourite part of the legend was the item entitled ‘the family doing the “digging”’.  Well done Donald Ian Templeton and Patricia Jacqueline Feeney.

What is interesting about this chart is that dates of birth, marriage or death have only been included for the most recent generation and then only birth dates; the late 1970s or very early 1980s.  Neither are there any locations mentioned.  This is a chart that plots only the names of successive generations and a family who made a series of deliberate choices to pass on significant names to their children.  A marriage between George Dalrymple Templeton and Margaret Sommerville is noted in the very centre of the diagram.  The couple chose to pass on Margaret’s maiden name by calling their son Alexander Sommerville Templeton.  Subsequently, Alexander’s grandson William inherited Sommerville as his middle name. 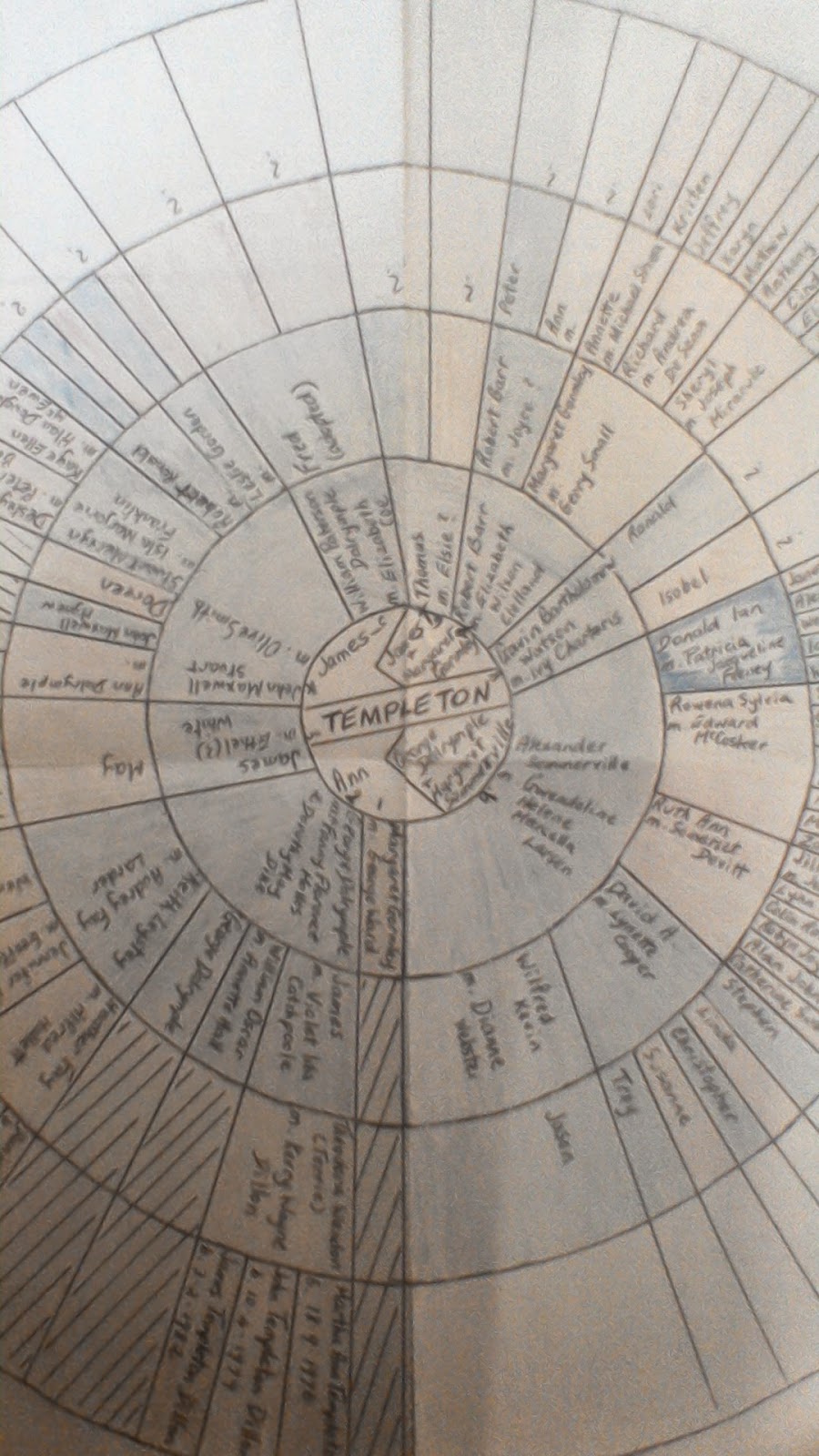 Ann Dalrymple Templeton.  Her middle name I suspect, is a maternal one that goes further back than this chart takes us.  Interesting that her parents, John and Olive, chose to carry on this tradition by bestowing the name on a daughter rather than one of their four sons.  Ann’s cousin George Dalrymple died without becoming a father.  There is no indication that he married.  George was named for his father and it is one generation back again that our George Dalrymple Templeton marries his Margaret Somerville.  A name such as Dalrymple passed down as a middle name could well indicate that it was the surname of a female ancestor.  Another branch of the chart shows that William Paterson Dalrymple Templeton and his wife Elizabeth Coe adopted a child, a boy, Fred.  No further information is provided regarding this particular line.  The cells in the generation following Fred are coloured pink, indicating female offspring and the next generation are marked children not known.  A response or comment to this post by anyone who has researched these branches of the tree, would be welcome.

Now to the Gormleys.  The second marriage recorded in the centre of the chart is between James Templeton and Margaret Gormley.  In the next generation, James and Margaret’s only daughter, also Margaret Gormley Templeton, married George Ward.  Both died without having children.  Gormley, variously spelled Gormaly and Gormilly, is of Irish origin, specifically from the north-western county of Donegal.  It means, simply translated, the son of a noble one.1

Where did the Templetons, the Sommervilles and the Gormleys meet, I wonder?  Does the origin of the Gormley name give us a clue?  How far back does this chart, in its current form, take us?  Do the events in the lives of these families take place in Australia?  If not, at what point during their history did they immigrate?  This simply drawn diagram provides a solid foundation for anyone with connections to these families, who may wish to further the research already compiled.

Join me next month, when I look at a very large chart that gives us the dates and stories of the Date and Storte families.