↓
GSQ Blog→Germany→Treasures in the Trove – April 2015
The man is slender, yet dapper in his three piece suit and cravat.  He is poised, relaxed in stance and with his right arm casually draped over the back of a cane chair, he is holding a small, rounded hat in his hand. His staring at the camera is not harsh, more purposeful, direct. Behind him is an outdoor setting, a stone wall, tall trees and a lake, completing what, I think, is an air of relaxed prosperity.
Her stare is equally direct, but in the eyes of the lady is a wistfulness, almost as though she is gazing straight through the camera to some place distant, of which perhaps, only she is aware.  Her upswept hair, delicate skin and trim figure provide a feminine canvas for her long drop earrings and the two-stranded necklace, possibly pearl, that is obvious against the dark material of her dress. It highlights a pectoral strand of lace and what appears to be a cameo brooch clasped at her throat; she is a picture of understated elegance. Her left hand rests lightly on the top of a stone column and she looks generally at ease before the camera…
I still remember the sense of excitement I felt when I first unfolded family tree chart #12. Lines horizontal and vertical connect members of the Posselt, Scholze, Rüber and Horn families across time (1798 to 1943) and continents (Europe and Australia).  European place names mentioned are Silesia, Prussia, Germany and Dresden. Once the families immigrated to Australia they stretched across this beautiful continent from Victoria to Adelaide and to Perth.
I must admit to having a sense of admiration for the person who compiled this information, as they have included, next to the oldest Posselt, a large, hand drawn question mark. Which part of the information allocated to Johann G. Posselt (a location of Silesia or a year of 1816) of which they are unsure is not clear, but I applaud them for indicating this. How often in the displays of our family history details are we prepared to indicate a fact, the metadata of an image, the significance of a piece of memorabilia, is yet to be absolutely determined? Is there room in our research and writing and the methods we choose to display our findings to clearly identify details yet to be proven? Are we accepting of language that indicates uncertainty?
The chart on this document would, in itself, allow anyone researching this family to confirm relevant relationships, dates and locations, however, this record contains so much more. Setting context for the information that follows is a paragraph written in the first person by the donor: The two documents were presented to me in 1981 by an ageing great aunt after I had expressed an interest in family history. If this had not occurred I am sure that they would have been discarded by the other members of the family after her death the following year. Quite a cache was given to me at the time including a Victorian photo album dating back to the 1850s as well as other items made, owned or found by my great-grandparents including even a tiny nugget of gold. As is often the case however more than half of the photos were unidentifiable due to the lack of captions. The diagram below indicates the relationship of the individuals who appear to be associated with the certificates with myself.
How wonderful that the donor included this background. More wonderful still that two photographs rest below the chart that explains the linkages between each family member. Unfortunately, as lamented in the paragraph above, neither includes any identifying information. Now, for anyone researching the Posselt and Horn lines, this could be disappointing and I can understand that. It does however leave room to exercise one’s genealogical imagination. I like to think that these photographs are evidence of the time at which the Scholzes and Horns are connected by the marriage of Maria and F. Hermann, a coming together of the Australian and German branches of these families. Being “genealogically raised” never to assume and always to verify every aspect of my family history research, I completely acknowledge it is not possible, given the details on the chart alone, to confirm the man and woman’s identities. To do so would mean verification of the details on the chart and thorough investigation of the photographs, mining them for the information they could offer beyond a cursory glance. That doesn’t mean though that I can’t ponder, wonder, imagine.
With the current emphasis in the genealogical community on sharing our research with others, to the supporter of the GSQ German (Special Interest) Group who donated these photographs and documents … thank you. 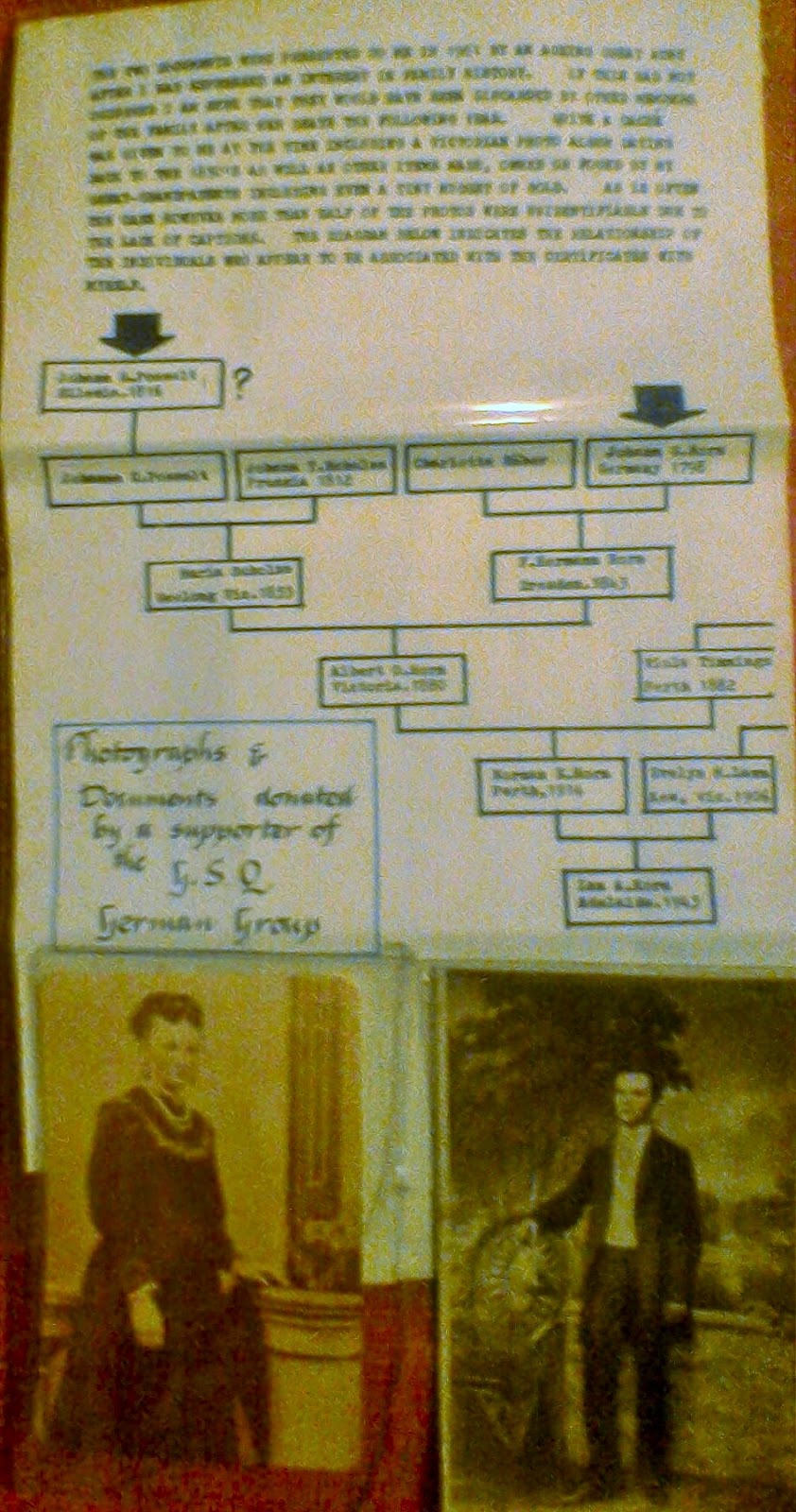