↓
GSQ Blog→Carlisle→Treasures in the Trove – December 2014

Sometimes interpreting a particular resource is not so much about the information that is provided, but what is not.  Family Tree Chart #4 is a basic, handwritten diagram of the descendants of English couple John Johnson of Carlisle and Isabella Atkinson of Durham.  While John’s birthdate is not recorded, the year 1842 is given for Isabella’s birth.  No marriage details, ie date, location or religious institution, or particulars regarding death, are provided. 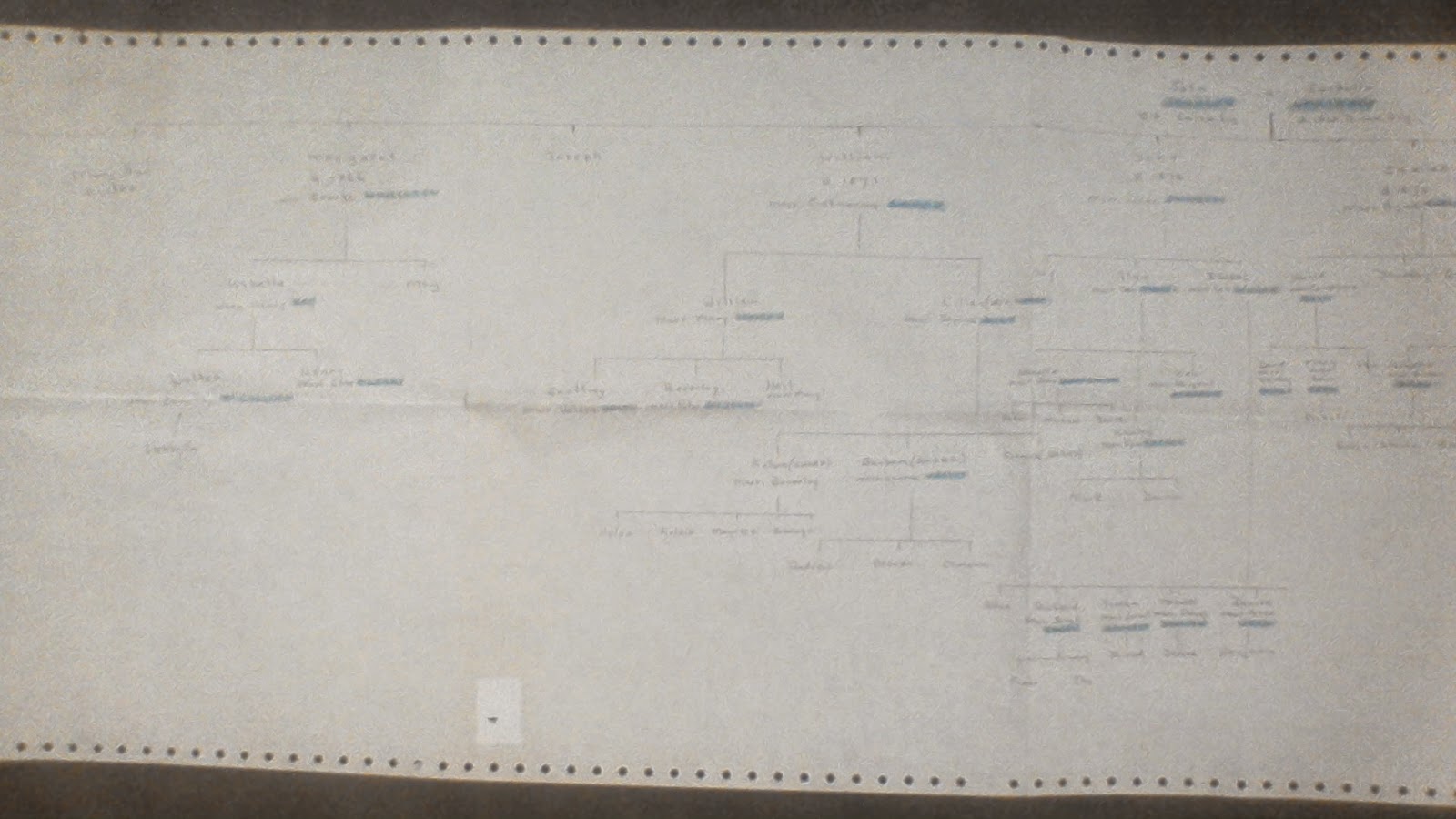 Ten children are attributed to the marriage.  Minimum data recorded for any of John and Isabella’s offspring is a first name for sons Joseph and Thomas.  For eldest known child and daughter Mary Ann the only additional piece of information is that she was born in 1862.  For others, the names of husbands or wives are included eg William married Catherine Soper, Ellen Clayton became the wife of Jabez and Elizabeth married Thomas Trevaskis.  From the next generation forward, names are the only details provided, apart from the acknowledgement of two divorces.  If you wanted to know where more recent generations fell in time, it would be necessary to calculate forward from the birth dates of Isabella and several of her children or research each family using the usual methods.

Across all branches from John and Isabella’s grandchildren going forward, the chart displays names and how each connects with the others.  All surnames are highlighted in light blue, clearly plotting the relationship of family groups to each other, rather than providing data and contextual details about individuals.  Perhaps this was the intention of the unknown person/s who compiled the chart.
From the time I first cast my eyes over this 40cm high x 1 ½ meter long ream of blue and white striped paper, suitable for the old fashioned dot matrix printers, one aspect of ‘what’s not there’ very much stood out to me.  On many family trees there are very clear notations as to if and when particular members of a household emigrated.  On other trees it is possible, easily, to determine the time/place etc of departures and arrivals simply based on the dates and locations given for various life events.  I had initially assumed that for chart #4 to become part of GSQ’s extensive repository someone from this branch of the Johnson clan must have immigrated to Australia.  Since, however, I very quickly reminded myself that assumption is the cardinal sin of genealogy, this may not have been the case.  With no contact details recorded, no way of following up, it’s hard to tell based on this chart alone.

On many genealogical diagrams, whatever form or format they take, it is not unusual to find Christian names passed both down and along familial lines.  Naming conventions, a son named after his paternal grandfather, a daughter for her maternal grandmother and so on, can be more or less easily identified.  Chart #4, apart from five exemptions, does not evidence these naming protocols, perhaps to the extent that other diagrams do.  Those exemptions are that John and Isabella named one of their own sons John.  John jnr’s daughter by his marriage to Lilian Jamieson, Isobel, was presumably named after her paternal grandmother, despite the alternate spelling of her name.  William, possibly the oldest of John and Isabella’s sons to survive into adulthood, along with his wife Catherine, named their son for his father.  Margaret and George Huriston named their daughter Isabella after her maternal grandmother.  One, possibly the eldest, of four sons born to Elizabeth and Thomas Trevaskis was named for his father.  Apart from these exceptions, the members of the Johnson family seem to have consistently made the choice to give each newborn a name different from any of their relatives. 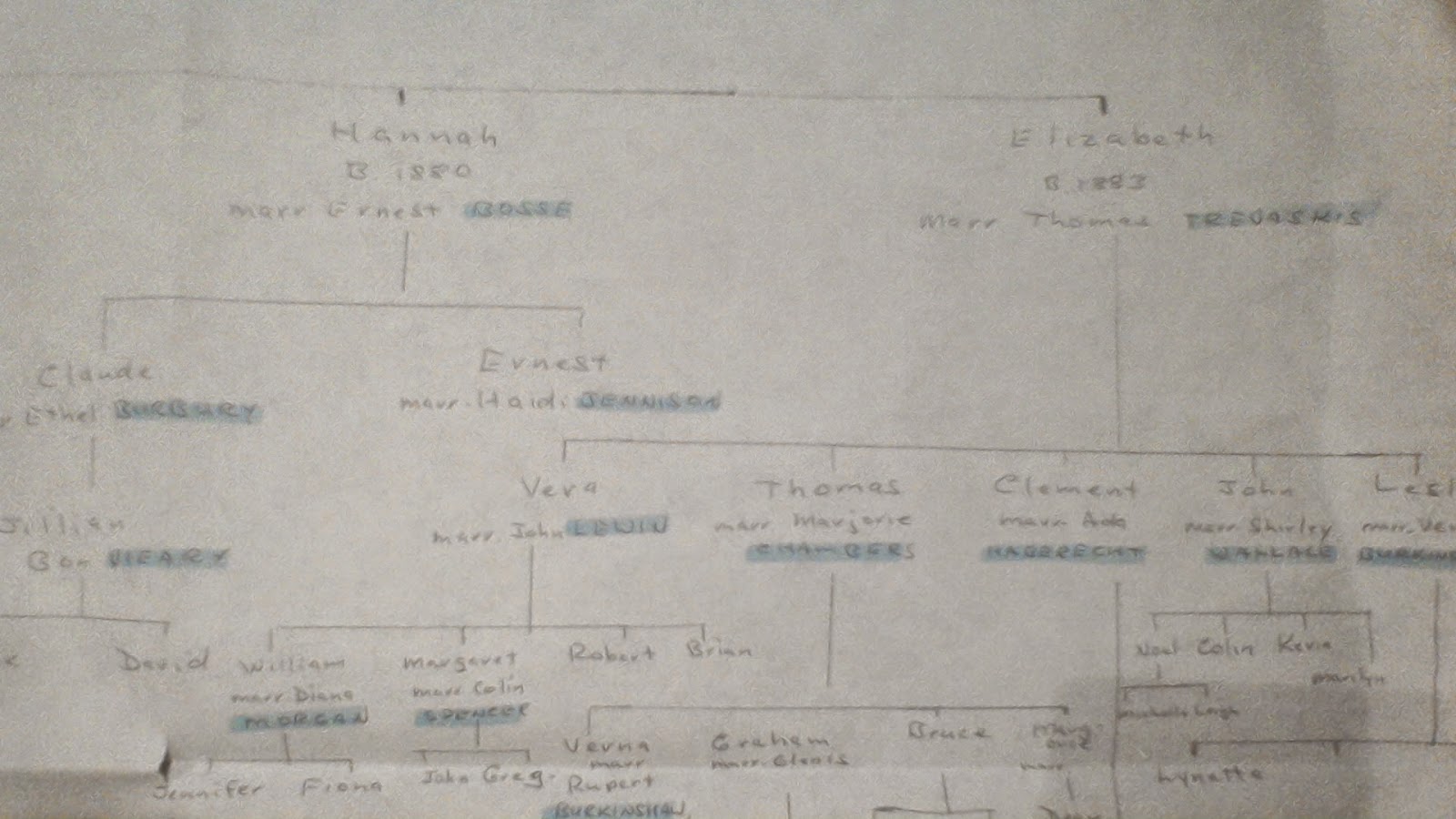 Of all the forenames recorded, most are names that would be familiar to genealogists with British and perhaps, European, heritage.  Mary and William, Henry and Margaret, Agnes and Geoffrey, Kelvin and Beverley.   There are, however, two Christian names, given to descendants of Elizabeth & Thomas and then Clement & Ada Trevaskis, which intrigue me.  On the chart, one of Clement and Ada’s four daughters is Fourette and the other is Ngarie.  I wonder if this is a spelling mistake or a deliberate spelling variation of the New Zealand name Ngaire.  It is actually of Maori origin.  When it comes to understanding the meaning of this delicately feminine name, even a quick check on the internet reveals strong differences of opinion.  The meaning most commonly agreed on is flax or flaxen.  Could the origin and meaning of this unusual name be a clue to where the family lived?

This family tree could be acknowledged more for the information it does not provide than what it does.  There is very little detail provided for any individuals listed, but together with other documents and records this chart would be a useful resource for any family historian researching this Johnson family.