↓
GSQ Blog→Uncategorised→Treasures in the Trove – January 2015
My expectations of the family tree charts lodged with GSQ would be the same as anyone’s, I suppose.  Content such as first and surnames, locations, dates, occupations and perhaps immigration details, could be considered standard.  I thought, as I made my way through each chart to write these blog posts, I may discover ordinary people, families large and small, those who travelled across the world and those with titles or connections to nobility; trees compiled by Society members or guests, with content that was meaningful to them.  I did not expect to see the family tree of anyone famous or, more accurately, infamous.  When I noted the subject of the Society’s Family Tree Chart #5, understanding that a level of sensitivity could be involved, I asked, separately, two of the Society’s executive for advice.  Both independently, simply and succinctly replied with a shrug, “It’s history.” 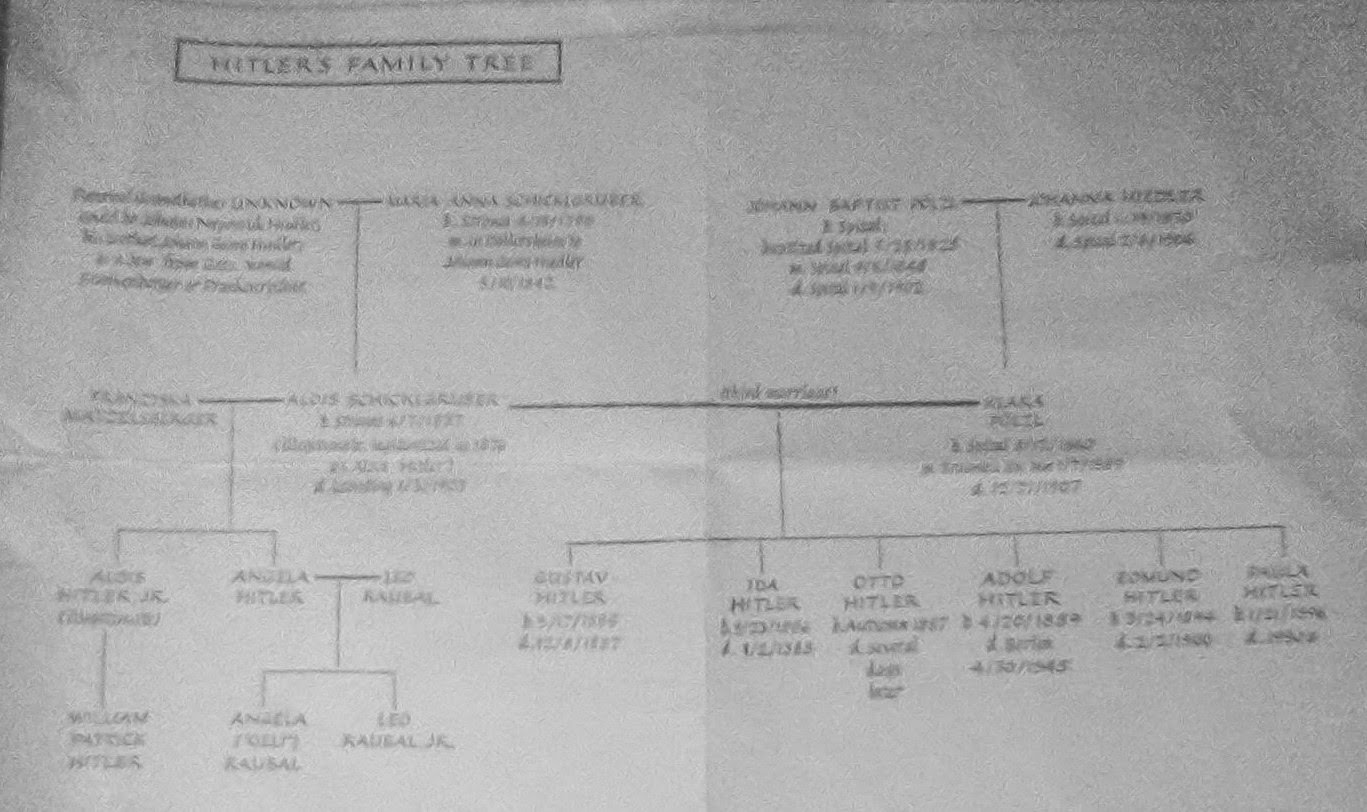 I can only wonder about the reasons for including the Hitler family tree in the Society’s holdings; context perhaps?  At some stage, was understanding the political, military and social construct of this period of human history important to a GSQ member?  As I scanned the details included in this simply compiled, 4 generation chart, it was intriguing to me that questions I would ask about any family tree containing this type of information, could be asked of the family from which the high saluting, speech giving dictator came.  Rather than seeing Adolf Hitler portrayed as an adult, a figure on the international stage, it was interesting to see one of history’s most notorious personalities set within the framework of a family tree, surrounded by grandparents and parents, full and half siblings and cousins.
﻿﻿﻿﻿﻿

Adolf Hitler’s maternal grandparents, Johann Baptist Pölzl and Johanna Nee Hiedler, were born, baptised, married and died in the Lower Austrian village of Spital.  Their daughter Klara was born there but became Alois Hitler’s third wife in Braunau am Inn.  She gave birth to Adolph and his siblings Gustav, Ida, Otto, Edmund and Paula between 1885 and 1896.  Gustav and his little sister Ida both lived to approximately two years of age, their younger brother Otto only a few days and Edmund did not live to see his sixth birthday.  It seems that this Hitler family was not immuned to the high infant mortality rates of the time.
﻿
﻿

Their brother, the man who was to become “The Fuhrer”, and his youngest sister, were the only two of the six to survive to adulthood.  Paula Hitler did not marry or have children.  She spent a portion of her life living with the surname Wolff, Adolph’s nickname, and adopted the title ‘Mrs’ for convenience.  During post war interrogations, she publicly expressed the sadness she felt about what happened.  For all that this man accomplished, for all the brutality he inflicted on others, he was her brother.  Shewas the only member of the immediate family to carry the name Hitler on her tombstone.
﻿
﻿﻿
As a result of Alois’ earlier marriage to Fanziska Matzelsberger, Adolf Hitler was a half sibling to Angela and Alois Jnr and consequently an uncle to Leo and Angela (Geli) Raubal and William Patrick Hitler.  William became father to four sons, one of whom died at a relatively young age.  The others did not live with the Hitler surname.
There is one more aspect to address, without which, a review of this family tree chart would be incomplete.  On Chart #5, there is a short notation underneath Alois Hitler Snr’s name.  Born illegitimate as Alois Schicklegruber, he was legitimised in 1876 at approximately 39 years of age and given the surname Hitler.  Notations in the space allocated for Adolph Hitler’s paternal grandfather state that Alois’ father could have been one of three men.  Two were brothers who shared the surname Hiedler; the third “…a Jew from Graz named Frankenberger or Frankenreither.”  As a result of Alois’ legitimisation, the children from both his marriages inherited the surname Hitler.  Of all eight children acknowledged on this chart it is the oldest, Alois Jnr, who is also acknowledged as illegitimate.  Illegitimacy seems to be deeply embedded in this family’s story.
In the Hitler family tree there are issues experienced by families across the world and throughout human history – illegitimacy, successive marriages and subsequent stepchildren/siblings, infant mortality and changes of names.  I think this is what I value, what moves me most, about family history – discovering the choices people make, the values they hold, the suffering they undergo and the joys they experience.  Whether famous or not, every life that we research has a story to tell.  What resources does GSQ have in its Treasure Trove to help you tell yours?
Sources
http://www.auschwitz.dk/paula.htm
http://www.findagrave.c.png
http://politicalvelcraft.org20130406obama-hitler-from-no-where-thats-how-rothschild-likes-it.jpg
http://elsecretodezara.blogspot.com.au200809la-familia-de-adolf-hitler.html.jpg
http://www.hitlerpages.compagina30.html
http://en.wikipedia.orgwikiAdolf_Hitler.jpg