Looking ahead, through the next folders containing GSQ’s family tree charts, I decided to review charts 8 and 10 in the same post, beginning with a mea culpa.  I mentioned in my January post that, when exploring these charts, I fully expected to find ordinary, not infamous and certainly not nobility or royalty.  I was wrong.

Chart 10 was compiled by a member of the Society and is a very simple, linear list of names, each bar one, with corresponding death dates extending from 1967 back to 1307.  Listed alongside each member of this direct family line is the name of their spouse.  Typed on a yellowing piece of paper, stuck to cardboard and covered in durable plastic, with small tack holes and blue tack residue on the back, it appears this chart was originally produced to be, perhaps publically, displayed.  Beginning with Helen Jean Cameron, the chart progresses back in time to include the Remington/Smyth families, four generations of fathers and sons who were members of the clergy, and Sir Auth Chester Bart I, II and III, to Joan of Acre and her parents King Edward I of England and his wife Queen Eleanor of Castile. 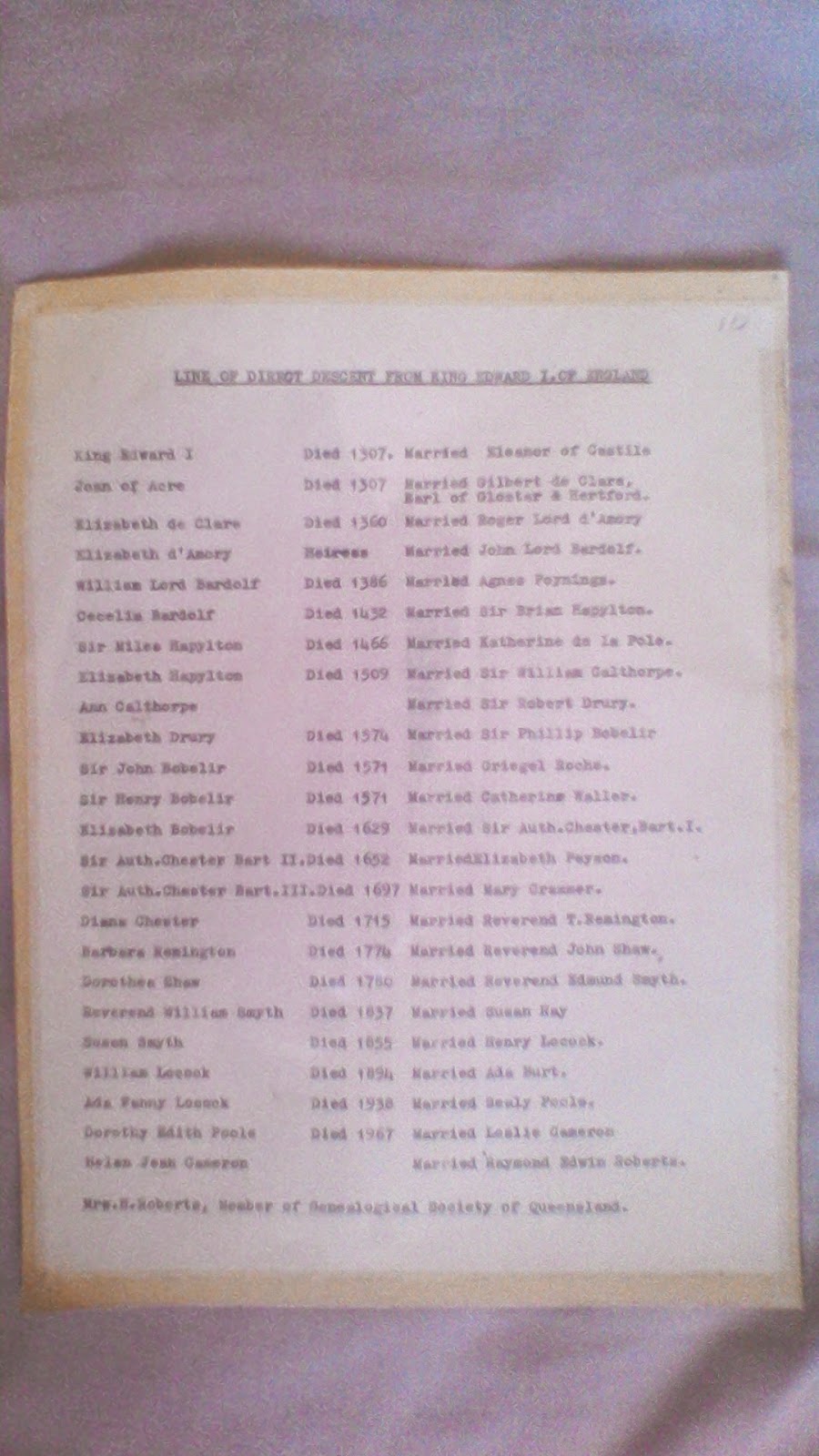 Chart 8 is entitled The Genealogical Tree of Family of Perth Lords of Drummond and spans the period from the 1900s to the 1500s.  Outlined among its branches are the creation of, and linkages between, the Drummonds and titles such as the Earls of Ancestor, the Barons of Aveland and the Lords of Willoughby.  The first Lord Drummond was created in 1407, being John of Cargill.  John’s great great grandson, James Commendator of Inchaffray, was created Lord Maderty in 1602.  The Earls of Ancaster came into existence in 1892. 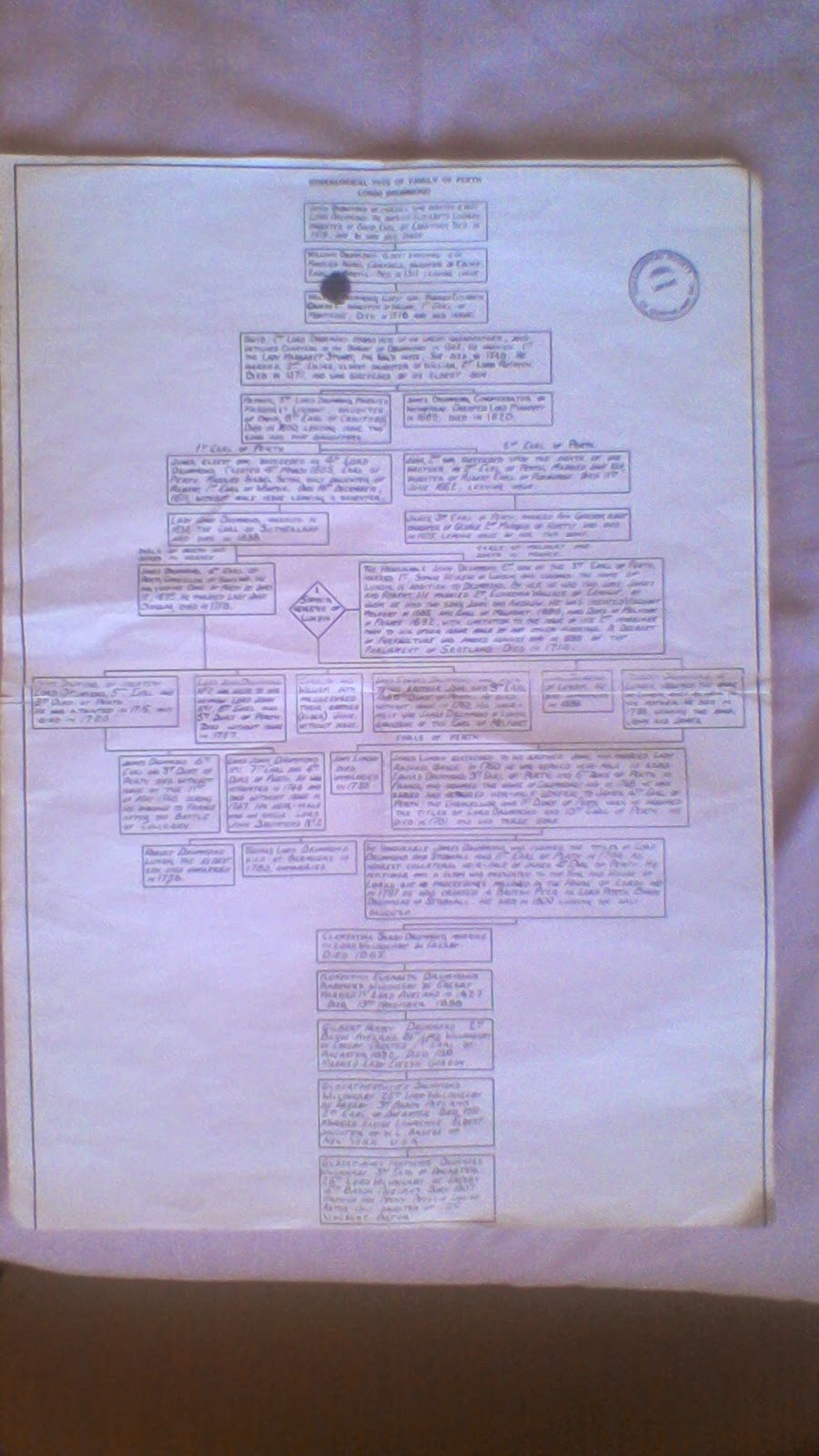 It is of interest to me that these titles were passed down through female lines.  James, 4th Earl of Drummond, was created on 4 March 1605 Earl of Perth.  Having married Isabel Seton, the only daughter of Robert 1st Earl of Winton, James died on 18 December 1611 “without male issue leaving a daughter”.  This daughter, Lady Jane Drummond, then passed down the title to her son, also James.  The Honourable John Drummond, who married twice, the passing on of whose titles was limited to the issue of his second marriage and against whom the Scottish Parliament passed a Decreet of Forfaulture in 1695, took on the name of his first wife upon their marriage.  John’s son Robert assumed his mother’s name as her only heir.

Remaining with the influence female ancestors in both these lineages, there is an aspect that is common to both, the title Heiress.  On chart 10 there is no death date given for Elizabeth d’Amory, who married John Lord Bardolf.  Instead she is designated Heiress.  The descriptions for entries on chart 8 are quite detailed, birth, marriage, death data; titles created and inherited; occupations and locations.  Each is neatly bordered with a square or rectangle, as you would expect for a family tree chart.  What makes Sophia’s entry stand out is not only that her details are captured in a diamond shape, right in the middle of the chart, but her designated title of Heiress of Lundin.  It is Sophia from whom John and Robert, previously mentioned, assume the Lundin name.

Heiresses were representatives of their family house.  In Sophia’s case, her children by John Drummond were exempted from the inheritance of their father’s titles, probably because Sophia was the niece of the Duke of Lauderdale, whose family, against his wishes, raised their children in the Protestant tradition, while John was a follower of, and administrator for, King James while he was in exile. [i]  The family and estate of Lundin, in and of itself, is well recognised within the peerage of Scotland. [ii] Sophia’s heritage is not acknowledged on the chart but it is possible to discover that her mother Margaret was daughter and sole heiress of John of Lundin, [iii]so there is a history in this family of inheritance passed from mother’s to their male and female offspring.
Taking note of the data on these charts could help us understand those who exerted political, military, economic, social and religious influence over the communities that were our ancestor’s homes.  I never cease to be thrilled when I discover the depth of information available to family historians, whether it relates directly our own lines or helps us understand the context of the times in which our ancestors lived and the influences brought to bear on their lives.
Next month I am deliberately skipping ahead a few charts because I am so excited to show you what they can contain.  Stay tuned…
[i]The Genealogy of the Existing British Peerage by Edmund Lodge https://books.google.com.au/books?id=kY5AAAAAcAAJ&pg=PA474&lpg=PA474&dq=sophia+heiress+of+lundin&source=bl&ots=zS4JUu7PWg&sig=7kUfn2ovUh34AvSQOAwMuzxLBLA&hl=en&sa=X&ei=XYsQVf2wEsvt8gW0soGwCQ&ved=0CDIQ6AEwBg#v=onepage&q=sophia%20heiress%20of%20lundin&f=falsedownloaded 24.3.2015
[ii]The Peerage of Scotland :  Containing an Historical and Genealogical Account of the Nobility of that Kingdom by George Crawfurd
https://books.google.com.au/books?id=gHNbAAAAQAAJ&pg=PA328&lpg=PA328&dq=sophia+heiress+of+lundin&source=bl&ots=2HxqjAFxzX&sig=DtQO87BYD7E_YcwfY-_sQgr-yqY&hl=en&sa=X&ei=XYsQVf2wEsvt8gW0soGwCQ&ved=0CC0Q6AEwBA#v=onepage&q=sophia%20heiress%20of%20lundin&f=falsedownloaded 24.3.2015
[iii]Genealogical Memoir of the Most Noble and Ancient House of Drummond by David Malcolm
https://books.google.com.au/books?id=hTEwAAAAYAAJ&pg=PA182&lpg=PA182&dq=sophia+heiress+of+lundin&source=bl&ots=dw7EbzELJ5&sig=1hwsuFzSoyxMrF36gOr2Z8wcz3g&hl=en&sa=X&ei=XYsQVf2wEsvt8gW0soGwCQ&ved=0CB0Q6AEwAA#v=onepage&q=sophia%20heiress%20of%20lundin&f=falsedownloaded 24.3.2015