The Middle Eastern sun beat down on my head, its powerful warmth seeping through my shoulders, stinging my nose and cheeks.  My eyes were continually adjusting to the glare as I walked row upon row, line upon line, of the graves lying in the British Military Cemetery on Jerusalem’s Mount Scopus. 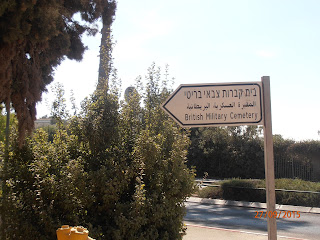 The imposing entry gates are made of wood and the local limestone that is sometimes a yellow cream or dusty pink hue depending on the time of day and the way in which the sun’s rays shine on it.   Embossed in the stone façade are the insignia of the units comprising the British military forces of the time.  An inscription in English states clearly the purpose for this small, but significant plot of land.  Jerusalem War Cemetery.  The land on which this cemetery stands is the free gift of the people of Palestine for the perpetual resting place of those of the allied armies who fell in the war of 1914 –  1918 and are honoured here. 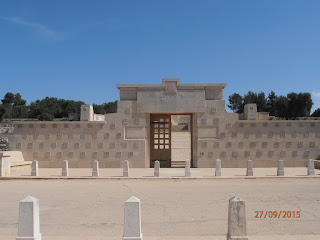 The cemetery is dominated by a large cross; the motif of a sword embedded in the upright arm.  The chapel at the back of the complex was decorated in honour of the 1916-18 New Zealand Expeditionary Force.  Its façade engraved with the names of officers and men of the Australian Forces who lost their lives in Palestine and Syria 1917-1918 and whose graves are unknown.  The lists include troopers from the Imperial Camel Corp Australian Coys, the Australian Flying Corps and 23rd and 24th BN. Australian Infantry, Australian MGC MTD Squadrons and the Australian Provost Corps.

On both sides of the complex are resting areas, the benches, walls and floors of the same stone as the gates and walls encircling the complex, the ceiling of thick wooden beams open to the azure blue sky above.  Sitting under the sweeping, green vines winding their way up the stone pillars was a respite from the heat of midday.  On one wall is a metal plaque with a map of the region and detailed information about WW1 and WW2 campaigns that lead to the loss of our brave fighting men.  It includes statistics regarding the number of burials and the nations represented.

When considering individual graves, a number of headstones containing only the words A Soldier of the Great War, Known Unto God, a date and a very simple cross, are a poignant reminder of the ignominy of war.  On the face of most markers are the soldier’s name, a date of death and the insignia of the battalion with which the individual soldier served.  Standing with my back to the entrance, my vision was filled with row upon row of white headstones, gleaming in the sun and emblazoned with one of two different styles of crosses.  The graves of soldiers from England, Wales and Scotland, and even Australia, could reasonably found here, but I was pleased to see those from the West Indies, South Africa and India acknowledged.

In the sections I explored, I found three headstones emblazoned with the ‘Rising Sun’ emblem of the Australian Imperial Force.  The first was over the grave of Trooper C. Mumby (1626) 10th Australian Light Horse 27th August 1918 aged 38, with a moving two word epitaph Our Brother.  A thick and fragrant bush of rosemary was growing to one side.  Cheekily, perhaps, I brought home a sprig with me, the scent and crumbling texture of the now drying leaves, a tangible reminder of this very meaningful experience.  The second was 155 Trooper E. E. Ensor of the 5th Australian Light Horse who died on 20th April 1918 aged 26.  The tribute, He died an Australian hero Fighting to save us all, was partially obscured by a shrub with long, slender branches and delicate, deeply pink flowers.  One of our own, a Brisbane boy, also lies buried in the earth of Jerusalem’s northern outskirts, under the ‘Rising Sun’.  Trooper R. J. Crozier (2635) of the 2nd Australian Light Horse, died 11thApril 1918 aged 21 and was … the dearly loved son of J. & J. Crozier Manly. Queensland.  While drinking in the sights, sounds and smells, how strongly I felt the connection to home, while being so very far from it. 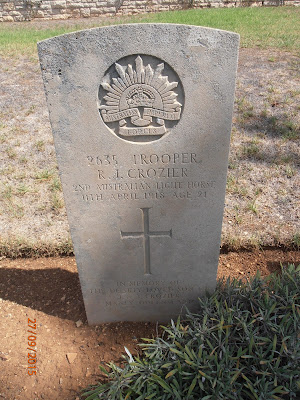 My eyes were still taking in line upon line of crosses, when I came across a section some five rows deep, in which the headstones were all marked with the Magen, or Star of, David. Surnames including Levy, Abrahamson and Wolffe, and the Hebrew letters tav, nun, tzadik, bet, hey, which stand for the phrase May His Soul be Bound Up in the Bond of Life Eternal in the centre of the Star, made the Jewish heritage of these men, who fought as British soldiers yet died and were buried in the soil of their ancient homeland, obvious.  For reference, a list of their ranks and surnames appears at the end of this post. 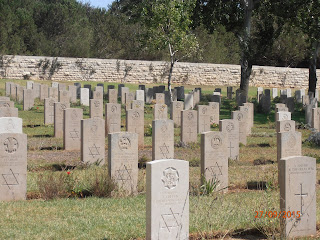 As I exited the cemetery, taking in the view over the north eastern suburbs of Jerusalem, I realised the gift I had been given – to explore, discover and pay my respects to those buried so far from their countries of birth and who made the ultimate sacrifice.