↓
GSQ Blog→certificate→Where There is a Will…..
Where there is a will there should be a genealogist!

This should be the mantra of every genealogist but so many people say to me “Oh my ancestor didn’t have anything so they wouldn’t have left a will” and in some cases this can be true but it is amazing how many people who you would not have expected have indeed left wills.

In Queensland it is not uncommon to find a death certificate in the probate packet from about the 1890s onwards at the Queensland State Archives (QSA). You can also find other certificates if someone has needed to prove identity or change of name. You can find out the addresses of the legatees at the time the will was proven and this has been a great help in some of the larger families I have researched where there were twelve children involved, most of whom had not married or moved out of Brisbane at the time the will was written but had by the time the will was probated. Three of them, in fact had moved overseas but that is another story.

Queensland State Archives have created an index of the wills (available online) proved 1857-1900 in the three districts: Southern (Brisbane), Central (Rockhampton) and Northern (Townsville). There is also an index to the Southern wills proved between 1901-1940 available online.

Definitely check the QSA catalogue as many of the more recent wills are listed by name in the catalogue ArchivesSearch. I have also found some entries not in the index but in the catalogue.
I have accessed wills from the Southern District that were proved in 2012. There is a handwritten index to wills at QSA for wills after 1940 that you need to check.
There was a Supreme Court fire in September 1968 which has unfortunately meant the loss of a number of wills that had not been transferred to the Archives including at least some wills proved in the 1950s.
Note these online indexes do not cover the Public Curator (Public Trustee) files but many of those before the 75 year closure period are name listed on Archives Search. If you know of a will within the closure period you can make a request to the Public Trustee’s Office. The QSA will give you a contact name and then the Public Trustee Office will request the file be returned to them from the Archives, they will then peruse the file and if they agree to give you the information will extract the “genealogically significant detail” and send you that. Unfortunately many of these files were “pruned” before the initial sending to the Archives as told to me by a number of people at the Public Trustee’s Office so I am hoping to live to 1932 to see what else may be in the file. 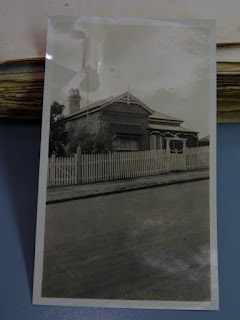 In the probate files in the time of Death Duties, also called Succession Duty, which finished in Queensland 1 January 1977, you will also find a list of possessions which are totalled in value to determine the amount of tax to be levied. These lists are very interesting snapshots of your ancestor’s lives at the time of their deaths.
In some recent research in a probate file for Raymond Augustus Stanley who died in 1930 (CUR/W886; SRS6047/1/3531, Item ID 906710) I found some unusual treasures apart from the expected probate and death certificate.
Would you have expected to find a photograph of the family home in Aspell Street South Brisbane? The valuer had taken the photograph and even included the negative as well.
Another really interesting thing in this file was information about when electricity was connected to the home. Who would have thought you could have gotten that sort of information in a probate file? 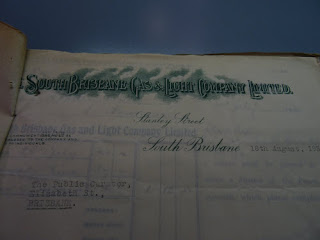 I also liked the various letterheads of the companies such as this one of the South Brisbane Gas and Light Company.

The Queensland State Archives have a number of Fact Sheets relating to probate on their website and these are freely downloadable. I strongly suggest you read these as they give lots of information and then go probate hunting!