↓
GSQ Blog→1939 UK National Register→Where were you when …. ?
This title is a bit of a misnomer because I had originally intended to write about something else. It’s funny, though, how the ideas and words seem to take over once you get into writing mode. However, the idea behind the title is still relevant although a better title might be “Where were your English and Welsh ancestors in 1939?”
It can often be difficult to trace more recent family members due to restricted access to records. So, the long-awaited release of the 1939 National Register provides a huge boost to those searching for details of British family members just prior to the Second World War. This data set is available on FindmyPast, but the pricing structure is separate from standard subscriptions. It can work out quite expensive, but I had a discount voucher and bought a 5 household bundle.
In addition to an image of the household, FindmyPast offers a full household transcript, maps, newspaper articles and historical photos relevant to the area in which your ancestors lived, and a wide range of statistics for 1939.
My daughter and I were keen to find five families. I searched for both sets of grandparents, one set in Liverpool and the second in South Derbyshire. My daughter looked for her paternal and maternal great grandparents. Two families were in Wales and the other in Liverpool. The results were quite enlightening for both of us and served to dispel some myths that had long been part of family folklore. She was fortunate that the two Welsh families lived in a small village and so appeared on the same page – two records for the price of one! 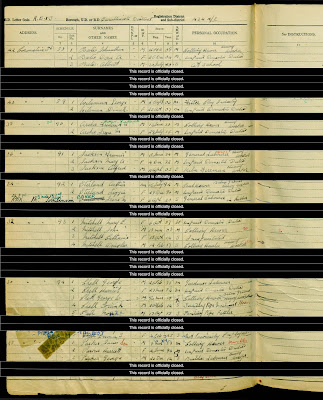 One of the first things you notice when looking at the scanned images are the black lines across the page with the words “This record is officially closed.” This is where records of individuals have been redacted. Main criteria for redacting records are that the individual was born less than 100 years ago, was a serving member of the armed forces at the date when the initial register was compiled (29 September 1939), or there is no record of the person’s death up to 1991.
The Register formed the basis of the post-war National Insurance System and was a working document until the mid-1990s. Individual records were updated as personal circumstances changed. At the outbreak of war, the Register was used for issuing ration cards, or National Identity Cards to everyone who was registered. This caused some problems for unregistered men whose families feared conscription and so omitted them from the Register. 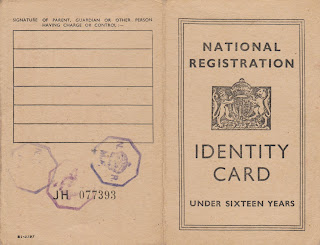 Even though I was born after the War, I was still issued with a National Identity Card. The card was updated with a change of address in 1950 and the registration number I was allocated stayed with me throughout my working life.
I won’t describe everything we discovered, but will highlight some interesting features.
As the original forms were completed by householders themselves, the odds of details being correct are relatively high. Even so, there are errors and apparent omissions. My father died in 1987, yet what I presume to be his record is redacted. It’s possible that he had already enlisted in the Royal Navy by then and I have to find his service record, which I’m sure I’ve filed safely away somewhere. In contrast, my mother is still alive and well – now in her 90th year – and her details are clearly displayed. Oops!
Vast numbers of British people emigrated in the 1950s and 1960s especially. So, if your family members died overseas, it is possible there’s no record of their death in the UK; it’s likely, therefore, that their records will be redacted if they were born less than 100 years ago. It’s possible to apply to have records of deceased persons opened – just follow the links from the transcription page. I’ve done this with my father and it apparently takes 10 working days for them to consider and respond to the request. You do have to provide official proof of death such as a death certificate.
One of my aunts married twice and it was helpful to see that the Register had not only been updated with the changes in her surname but also the dates when these changes occurred. You can just make out these changes in the image above.
The pointers on the maps linked to the transcriptions give a pretty accurate location for the house where my grandparents lived. Our family eventually moved into a house a few doors down from my grandparents and it was interesting to see who had previously lived in ‘our’ house. All these houses have since been demolished to make way for new development. You can compare 1939 maps with current day maps. Pingle Farm shown at the bottom of our road has been a secondary college since the 1970s. The prevalence of mining shafts can clearly be seen on a larger map. There are some general photos and newspaper articles of Derbyshire, but nothing relating to my specific area; the accompanying general information would be useful if you didn’t know anything about the area. You could probably find out more by using Google or Wikipedia. Articles on social history topics such as fashion are extremely useful in extending your knowledge of life in pre-war England.
I mentioned earlier about the details on the Register dispelling family myths. In our case, the data didn’t just dispel family myths, it blew them out of the water. Having located the address at which the family was living, despite the details of most of the younger people being redacted, we used Google to plot the location of this family’s residence and then did a Google search to find out more. We discovered that a presumed large detached house in a middle-class area of Liverpool was actually a 3-bedroom terrace house. We even found real estate ads for houses in that street which give an idea of the present-day value of the property. For this same family, the occupation of the head of the household was significantly different, and more mundane, from that provided on a marriage certificate some 5 years later! More confirmation, if any is needed, that it is essential to double-check all information provided by older family members.
GSQ is holding a mini-seminar on 30 January which is all about putting your ancestors in context. Pauleen Cass will consider how lives were affected by place and community; I will look at some significant events in British history and how these may have impacted on your family; finally Helen Smith will illustrate how understanding maps can help you understand your ancestors’ lives. The 1939 Register is an ideal tool to get to grips with life in pre-war Britain. Do consider coming along.
Until next time.
Pauline