Have you ever thought about obtaining the will of your ancestor? It can be very useful. It also gives you an insight on family relations, which sometimes cause controversy. Recently I was doing some researching, or could you say re-researching of a relative John Trew. In an earlier post I stated how I thought I had finished researching him.

In John’s will[1] he leaves everything to his first daughter, Nellie, whom he states is living at Hiram College, U.S.A. From this information I was able to find where Hiram College was. I then emailed the College. The librarian there was very helpful and did some research for me and so I was able to find information about Nellie and her children, and also a living contact. On the other side of the coin, as I stated earlier I was satisfied I had done all the research I needed.

In John’s father’s will[2] everything is left to his wife Elizabeth. However, if she marries again the estate then is taken from her and divided equally amongst the four children. Now John’s mother was not so loving in her will[3] as she doesn’t decide to leave everything equally to the four children, and actually I find it a fascinating break up of her estate. She gives son John, “half of an orchard and the other half to her daughter Mary”; daughter Caroline, “one cottage, the garden in front and the orchard that adjoins the cottage, likewise the half the back garden and all my household goods and furniture”; daughter Susan receives “one cottage with the garden in the front, half the back garden and the lower orchard.” Caroline had to pay the funeral expenses. 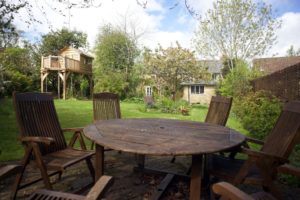 A back yard in a house in South Perrott today

Before Elizabeth’s death, John may have been living in the U.S.A. and Mary was living in Australia, I don’t know what they would do with their orchards?  Caroline[4] was living in Netherby, a village eight miles from South Perrott, and Susan[5] was living in South Perrott. So I assumed because her daughters lived close by they were gifted the cottages.

On obtaining Susan’s will[7] I was able to find more members of her family and thus furthered the family tree in that area.

My grandfather’s will was also one of those where there was controversy. In it he bequeathed money of unequal sums to his daughters and one son was not included in the will. One of my aunties was always sad at the way her father divided his will and would always mention it on visiting her.

From the above, if you have never thought about obtaining a will, think about it. I was able to find more of my family tree from obtaining wills and also I was able to find places where the benefactors lived. Also it made me delve deeper into why the will was worded as such! Happy will searching!