↓
GSQ Blog→Queensland→Jericho→Working for the CWA. 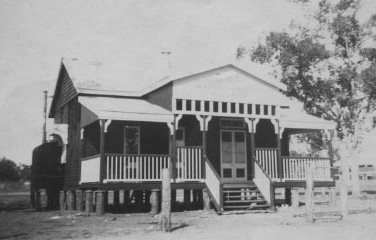 Grandmother Bessie Cooper was an advocate for country women and children through her involvement in her local Branch of the Country Woman’s Association (CWA) in Jericho.

Bessie Cooper’s strongest advocacy was for the improvement of the health and welfare of children who live in the country through the provision of comfortable homes. Her recommendation was that the Government be urged to provide building material, to be paid off in small yearly instalments, so that comfortable homes could be built by small struggling land selectors. She compared her plan to the scheme under which selectors could get loans from the Land Administration Board for wire netting and other improvements to their properties, the money being paid off over up to 20 years.[1] Bessie’s motion was passed at the CWA’s Central Divisional Conference in Rockhampton in 1936.  Persistence paid off as she had been bringing her proposal forward at the Divisional level since 1933, previously without success.

Educational opportunity for country children was another concern for my grandmother, as she recounted the challenges for her sons, who along with other country children were required to pass a Scholarship examination to enter a State High School. In comparison, children who attended an intermediate school (class levels six and seven) needed to pass the High School Entrance examination, which was considered easier than the Scholarship examination.[2] Each of her three sons had attended secondary schools between 1918 and 1921.

By the time Bessie Cooper was first elected as the fourth president on 1 April 1933, a Rest Room containing a Memorial Library had already been built on an allotment donated by the local Shire Council. The Room was to provide a ‘home away from home’ for its members, a number of whom lived on pastoral stations some miles/kilometres away from town. The library already contained over 500 books. It was to become a place for wedding receptions and for entertaining visitors, including Lady Winifred Wilson, the Queensland Governor’s wife in June 1933. Fundraising activities were also held in the Rest Room.

The Jericho Branch had formed in September 1925, just three years after the start of the Queensland Country Women’s Association at the Royal Exhibition (Ekka) in August 1922. Following a visit to central-western towns by Mrs E de Norbury Rogers, Organiser for Central Queensland, during September 1925, CWA Branches were formed in Westwood, Duaringa, Emerald, Springsure, Clermont, Blair Athol, Alpha, Jericho and Isisford.

The Branch’s early years coincided with the district’s dry years of 1925-27 and the depression years of the early 1930s. During these difficult times the women believed that support for local families and children ‘in distress’ would pay a significant role in their work. This support included assisting an ill person to holiday at the seaside and a child to undergo ophthalmic treatment in Brisbane.

At the same time they turned their attention to the building of a shelter shed at the Jericho Cemetery as a soldier’s memorial. It was planned in conjunction with the Jericho Shire Council and on Anzac Day 1935 was handed over to the Council for the use of the public.[3]

By 1936, Bessie, as President, was able to report to the Annual General Meeting that the  scheme to establish an outpatients department of the Alpha hospital in Jericho and to secure regular visits by the doctor had proved a success. The success of the scheme, which was originated and promoted by CWA members over several years, was illustrated in the 360 visits made to the department to that point.[4]

The holding of a Bazaar in October 1926 started an annual tradition in Jericho which sometimes extended to a week of activities which included the bazaar, dances, an annual ball and children’s party or fancy dress Cinderella. At a Bazaar, sometimes described as a Flower Show and Fair, babies were judged; as were cakes, scones and bread; vegetables, flowers, needlework and drawing. School children competed in their own sections. The stalls sold refreshments, cakes, lollies, ice cream, lucky dips and linen, many of the items homemade.[5]

During Bessie Cooper’s time as President, she joined Miss O’Rourke the Secretary of the Longreach Branch to organise arts and crafts instruction for the members of nine central-western branches. The classes for Jericho members in 1934 focused on dress making, cake icing and flower making.[6]

Bessie Cooper served the Jericho of the Country Woman’s Association for about eleven years filling roles as country Vice-President, library trustee, conference delegate, and becoming President from April 1933 until August 1938 when she left Jericho. She had also made personal donations to the Branch – a writing table for the Rest Room, the CWA badge at the front of the Rooms, which she had carved herself, and the proceeds of a bale of wool shorn from her own sheep. Along with her advocacy for country women and children, she joined other local women in catering for events and raising money for many causes.