From the GSQ Archives
2018 marks the 40th anniversary of the formation of the Genealogical Society of Queensland.  During the course of this year, items about its formation will be published on the blog, highlighting key milestones over the last 40 years. The first edition of the journal, Generation, was published in March 1979 as Volume 1, No 1. There were six Chapters at this time  – Ipswich, Brisbane, Toowoomba, Sunshine Coast, Bundaberg and Rockhampton.

Most of the Chapters submitted a report for inclusion in the very first edition of Generation and an edited version follows. [Note: Each of the Chapters are now family history societies in their own right.] 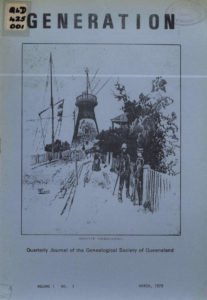 IPSWICH CHAPTER
On the 8th September 1977, the inaugural meeting of the Ipswich Genealogical Society was held in the recreation hall, of the Church of Jesus Christ of Latter Day Saints. Officers elected at that meeting were – President, Mr. Warren Stone, Vice President, Mr. I.C. Waters, Mr. R. Van Egdom Secretary/Treasurer and Committee Members were Mr. G. Cook, Mr. N. Mann, Mrs. D. Marles and Mrs. C. Verrall. Never did the original members dream that the Society would expand so quickly, with 40 members being on the books in a short time. In October Mr. Van Egdom resigned owing to pressure of work, and Mrs. C. Verrall took over as Secretary, with Mr. R. Biddle filling the vacancy on the Committee.

During the year, guest speakers were Mr. R. Rea, Mr. T. Buckle, Mr. Don Green, Mr. B. Page, Mr. Lynn Aberdeen and Mrs. Lyn Waldron. These speakers did much to help with research and advice for those who have no experience in genealogy. Workshop nights were also held, to enable members to compare notes, and help each other with the best way to obtain information. In May 1978, a chapter of the Genealogical Society was formed in Brisbane, and it was decided to change the name to the Genealogical Society of Queensland, Ipswich Chapter. At the first Annual General Meeting in June 1978, Mr. W. Stone stepped down from the Presidency and Mr. I. Waters was elected President with Mr. N. Stone as Vice President, Mrs. C. Verrall as Secretary, and Committee members Mr.G. Cook, Mr.R. Biddle, Mrs. D. Marles and Mrs. J. Louden.

In October, Mr. I. Waters reluctantly advised that with the pressure of work he had from his Church calling, combined with work as State President, he would have to step down from the Presidency of the Ipswich Chapter. Mr. R. Rea was elected as the new President.

The Ipswich Chapter is certainly proud to be the parent chapter, and to see the enormous growth of the Society in all parts of Queensland in little over twelve months, and wishes all members happy researching.

BRISBANE CHAPTER
The Brisbane Chapter of the Genealogical Society of Queensland was formed at a public meeting held at the Education Centre Building, Brisbane in May 1978. At the initial public meeting 24 people attended and the number of financial members is now over 40, with a good number of visitors attending each meeting. Meetings are held on a regular basis and the format has been to commence with an informal meeting, followed by a guest speaker. The guest speakers have been arranged by one of the Committee members and have all been of great interest to the members and visitors. In order to make people aware of the Society advertisements were placed with newspapers and radio stations, informing the public of our meetings etc. The Chapter has now commenced its reference library. Meetings are held on the third Wednesday evening of each month at 7.30p.m. at the Education Centre Building, South Brisbane.

NAMBOUR CHAPTER (SUNSHINE COAST)
The Nambour Chapter of the Genealogical Society of Queensland was formed at a meeting held in June 1978. Members attending were mostly students of a weekend Adult Education Course, who felt the need for a regular contact with persons interested in, and knowledgeable about, genealogical study. After only five meetings our members have swelled to 30. As we are all at various stages of experience in our knowledge of Genealogy we have benefited greatly from regular visits from our Queensland Secretary and teacher, Mrs. Lyn Waldron. Our attendance at the Queensland Convention held in Brisbane on 28th October 1978 further heightened our knowledge of research, and inspired us greatly. Field days are to be held regularly beginning with a visit to our local cemetery where we will tabulate as much information as possible as many of the headstones are in a sad state of disrepair. Office Bearers elected at our Inaugural Meeting are as follows: President – Mr. John McGrath. Vice-President. – Mr. Ron Ritchie. Secretary – Mrs. Joan Thomas Treasurer – Mrs. Betty Watson. Librarian. – Mrs. Pat Batson.

BUNDABERG CHAPTER
The Bundaberg Chapter was formed at a public meeting which was held at the Bundaberg College of T.A.F.E. on the 25th November, 1978. The Chapter received affiliation with the College of T.A.F.E. on the 24th January 1979. Affiliation with the College has secured a regular meeting venue as well as the use of college printing and photographic equipment. The Chapter hopes to participate in the College’s “Activate” Television programme which is broadcast in the Wide Bay area.

The meetings in December and January were workshops at which new members tackled the first steps of tracing their ancestry. The Chapter has three experienced genealogists who led the first workshops. The Chapter meets at 7.30p.m. on the second Wednesday of each month, at the Bundaberg College of T.A.F.E., Walker Street, Bundaberg.

INALA CHAPTER
The Inala Chapter was formed on Tuesday 5th December, 1978 at the Family Education Centre, Kittyhawk Street, Inala. Guest speaker Mr. Laurie Jones was introduced by Mr. John Tucker. Mrs. Lyn Waldron, Secretary of the State Executive, addressed the meeting. Mr. Jones outlined the aims and future plans for the Society and how it has grown since the first Chapter was formed on May 17th, 1978. The Inala meetings will be held first Wednesday of each month at the Family Education Centre at 7.15p.m.

There is no report from Rockhampton Chapter this Journal, or from Toowoomba.