I remember when I was young my father would often joke with my friend’s mother about some scandal that had involved both our families long ago (although as I was to find out it was not so long ago!).  I remembered these conversations when I noticed a small piece in a 2002 edition of the Runcorn Record, a now defunct publication put out by the Queensland State Archives. Unfortunately, my father had died by then, so as usual I was castigating myself for not asking questions while he was still alive.

The piece was headed An item of interest and related to how a researcher had used divorce records held in the Archives to dispel a myth that had been handed down in their family and had even been published in their family history. The myth related to a scandal that enveloped our respective families in 1900 when my great uncle Oswald Marmaduke Dalby Bell (Ossie) secretly left Queensland with Lulu, the wife of Thomas McIlwraith Taylor, leaving her two small children.

Thomas McIlwraith Taylor was a nephew of Sir Thomas McIlwraith (a Premier of Queensland) and had migrated from Ayr, Scotland.  At the time of this episode, he was the station manager of Jimbour, a property on the Darling Downs, which had been owned by my grandfather’s family, the Bells, but at this time was incorporated into the Darling Downs and Western Land Co. Ltd. with other properties owned by Sir Thomas McIlwraith. During the 1890s, the company was taken over by the Queensland National Bank as a result of debts on the property and the collapse of the QN Bank.

Thomas held the position of station manager during the 1890s and into the early years of the 1900s.  On 15 May 1895, Thomas married Louise Jane (Lulu) Thompson [1] and they had two children, Viva born in 1896 and Melody Elsie born in 1897. My great grandmother, Margaret Bell, was still living on the property at this time and in her letters she often wrote about  ‘Mr Taylor’ as well as about his upcoming marriage.

Ossie Bell had been an articled clerk for Daly and Schacht in Brisbane but had decided that a desk job was not to his liking so came back to Jimbour.  From Margaret Bell’s letters (his mother), he had many schemes to make money during the late 1890s, all with varying degrees of success.  Ossie was often at Jimbour after the Taylors married and in fact, in one of Margaret’s letters, she recounts that Ossie was at a dance last night at the school house – in honour of Mr Taylor’s wedding which went off well ….[2]  After they married, Ossie appears to have been a frequent guest at the Taylors’ house at Jimbour.

In March 1900, Thomas went to Emerald on business leaving his wife and children at home. Passing through Brisbane on his return, he met Albert Carr (Ossie’s business partner) who told him that Lulu had left. When Thomas returned home he found she had removed all her personal things.  One wonders where were the children!

My aunt always said Uncle Ossie took the yellow buggy and eloped with the manger’s wife to India! If they did use the yellow buggy, they would have taken it as far as Macalister, the nearest railway station, from where they would have travelled to Brisbane.  They stayed at the Queensland Club Hotel in Brisbane before boarding the steamer Airlie for Hong Kong (not India).  Ossie had obtained a job as club secretary of the Hong Kong Racing Club. Apparently Lulu was unhappy with station life and had developed a friendship with the younger Ossie.

The myth was that Thomas never filed for divorce but he actually did, perhaps to ensure he got custody of the children. [3]  During the divorce proceedings, Albert Carr, who was a shipper of horses and ponies (he appears to have had a racing stable in Brisbane and shipped horses to China) said he had been in partnership with Ossie for some time. In the early part of April 1900, he met Ossie several times at the Queensland Club Hotel where he was staying and Ossie informed him that he and Mrs.Taylor were leaving for Hong Kong.  Albert Carr attempted to persuade him not to do this, but was not successful. Ossie told him that he and Lulu were booked on the steamer Airlie in the name of Mr. and Mrs. Snell but intended to travel as Mr and Mrs Bell. On 5 April 1900, and while in Brisbane, Ossie wrote a letter to his mother  saying nothing about what had happened (did she know before they left or was it a complete surprise) but making an irrelevant remark that he had met a shoemaker who spoke very nicely of you & papa & remembered how you always liked your shoes made with very square toes! [4]

Albert Carr saw both Ossie and Lulu leave Brisbane to meet the steamer in the Bay. It was en route to …Hong Kong and Eastern ports…[with]… a number of saloon passengers for Hong Kong, as well as 12 Chinese for their native country, and 2 Kanakas and 4 Malays for Thursday Island. [5] Albert Carr saw Ossie and Lulu again in November 1900 at the Hong Kong Hotel and they occupied the same room. [6]

Dr. Herbert Chesson, assistant medical officer at Goodna, travelled from Brisbane to Thursday Island by the steamer Airlie and during the divorce proceedings, he claimed that two of the passengers went under the name of Mr. and Mrs. Bell and they were regarded as husband and wife by all on board. [7] The marriage was dissolved on 20 May 1903 and Thomas received custody of the children.

A further myth was that once Ossie and Lulu arrived in Hong Kong, he left her and she had to return to Australia, a fallen women. In fact, Ossie and Lulu returned to Australia in 1902 and in November Ossie transported horses to Calcutta by the Euryalus; it appears he was employed as a horse dealer in Randwick, NSW during this period. [8] They married on 25 June 1903 in St Leonards, Sydney, a month after the divorce was granted. [9]

It is not clear when they moved  to India but he was racing and selling waler horses (walers came from New South Wales).  In November 1904, Maida Bell, his sister, boarded the Moldavia to travel to India to visit her brother and sister-in-law in Calcutta.[10]   Later Maida must have been thinking of returning there when Ossie wrote to Colin (his brother) on a trip to Sydney to buy horses in April 1906:

Maida wrote the other day cheerfully enough. You can rely on me to back you up in anything you may think best for her. I repeat that we are quite ready to have her in India if she is game to come in a horse ship with us & will face the climate. [11]

And they were still together in 1909 when disaster struck en route to Australia from India:

The RMS Omrah arrived at Fremantle from London this morning. During the voyage a sad incident occurred. Mr Bell, a Calcutta horse dealer, was travelling from Colombo to Sydney, in company with his wife. Three days ago Mrs. Bell died at the breakfast table from heart disease. Her husband is much distressed, and broke his voyage at Fremantle. [12]

It appears Lulu had a weak heart having suffered from rheumatic fever as a child. Ossie must have made his way to the east coast  and to Brisbane because on 17 May 1909, he wrote to his brother Colin from Sydney, Mother & Maida were very sweet & tactful all through my visit. I shall always be grateful to you for the leg up you gave me right through the trip which otherwise would have been a perfect orgie of grief for me. [13] 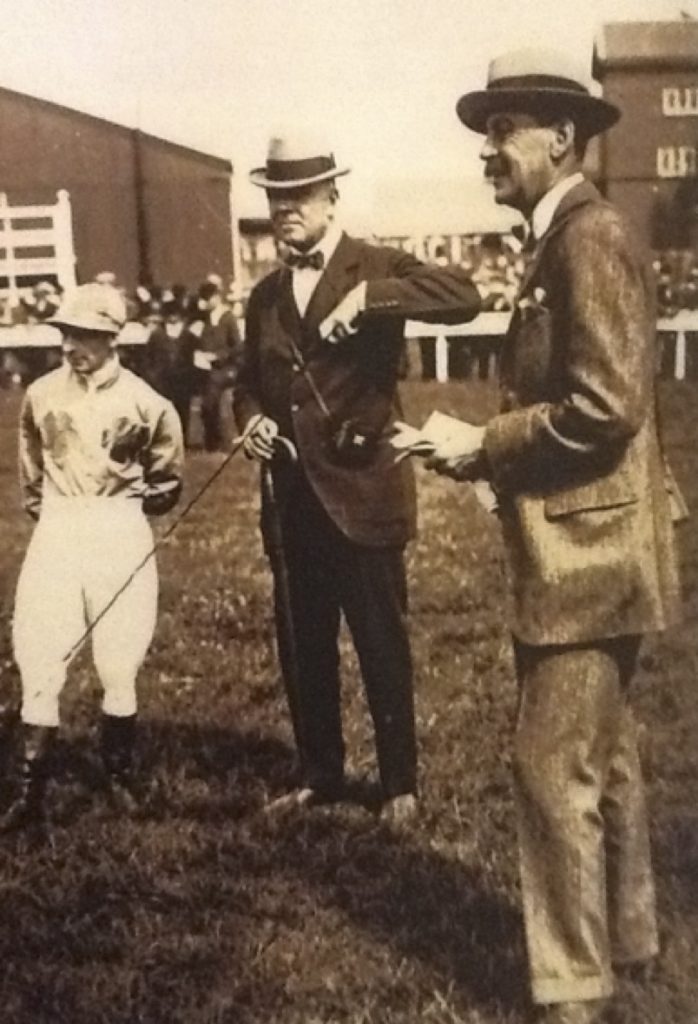 Duke in the middle and Ossie on the right

Ossie moved to England and in June 1913 he was living at Priam Lodge, Epsom with his cousin Marmaduke (Duke) Bell and training horses. [14] He enlisted in the British Army in WWI where  he served as Second Lieutenant in the 11th Worcestershire Regiment and was attached to the Royal Flying Corps (R.F.C.) which later became the Royal Air Force (R.A.F.) where it appears he was a photographic officer and served in Salonica during the war. [15]

In September 1916, Ossie married Marjorie Gertrude Fleming and he wrote to Colin;

I wrote to Maida the news of my approaching marriage & wonder if she will have told you all about it.  We were to have been married on the 3rd Oct next but I have just received a telegram to be prepared to embark for abroad……The girl I am marrying Marjorie Fleming is a real good sort… [16]

After the war he set up a stable  at the Delamere House Stables in Lambourn and in 1928 he trained the English Derby winner, Felstead with the Longreach Leader reporting:

The English Derby this year had more than the usual interest for residents of the Central West as the winner Felstead is trained by Capt. Oswald Bell. Capt, Bell now trains about thirty horses but his success in the Derby, will doubtless mean a large addition to his string. [17]

This story has once again made me reflect on the fact that family folklore can be true, can have elements of truth or be totally inaccurate. Some time ago, I was having lunch with my friend who is related to Thomas Taylor and we discussed the scandal. She told me that her grandmother Bessie (Elizabeth Taylor) who was Thomas’s sister came to Australia in 1900 to look after his two small children, Viva and Melody, when Lulu left.  My friend did not think they ever saw their mother again and when Bessie married in Australia in 1909, it appears that her brother asked her to take the children to Scotland on her honeymoon and they were schooled there and didn’t return to Queensland until after the war; they left for Scotland the same year their mother died.

It is a very sad story but on a happier note my friend would never have been born if her grandmother had not come to Australia to look after her brother’s children when Ossie and Lulu[18] ran away together!

[9] NSW Births, Deaths and Marriages, Registration Number 4510/1903. I haven’t received the marriage certificate so this number only relates to the online record which is not complete.

[18] Photos of Ossie and Lulu are copies from the divorce file.