Parish records are the main source for information when your UK family history research extends back beyond the period covered by civil registration which started in England and Wales in July 1837 and the census which was conducted on 6 June 1841. Parish records can often be a rich source of information, but sometimes it’s a major challenge to find the actual parish where your ancestors were baptised or married. Maps are an invaluable resource in situating their lives within a geographical and ecclesiastical environment.

A useful resource to date has been the Phillimore Atlas & Index of Parish Registers edited by Cecil R. Humphery-Smith. I have the 3rd edition, Phillimore & Co Ltd., Andover, Hants, 2010. Phillimore’s Atlas includes an index of all parishes by county, recording the coverage dates of parish registers and their availability, accompanied by maps showing where each parish is located as well as topographical maps of the relevant county. It covers England, Wales and Scotland. GSQ now has a new resource which members will hopefully find extremely useful. This is The Parish Atlas of England, by T.C.H. Cockin, published by Malthouse Press, Barlaston, Staffordshire in 2017. I have reviewed this for Generation but thought it would also be useful to include the details in a blog post. 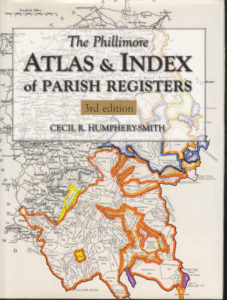 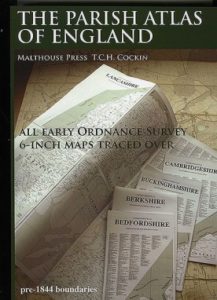 The Parish Atlas of England focusses on maps which define parish boundaries with great precision. This is a one-man opus, which has taken 7 years to complete. The author personally traced or photographed the original Ordnance Survey maps wherever possible – in some cases he was provided with detailed copies of the maps by County Record Offices. His maps reveal the extent of each ecclesiastic parish before 1830 and all the detached portions which sit within other parishes, no matter how small, as well as extra-parochial liberties. His intention was to produce a resource which filled the gap in scale between the small county parish maps produced by the Society of Genealogists (1959), and the 1 mile to 6 inch Ordnance Survey maps dated between 1863-1888. The author comments in his preface that, The Atlas strives to reconcile Samuel Lewis’s A Topographical Dictionary of England (1831-) with Phillimore’s Atlas and Index of Parish Registers, the OS County series maps, and the Guide to Local Administrative Units of England (1991) among others. Extracts from Lewis’s Topographical Dictionary are often found in the county descriptions on GENUKI as well as extracts from historical directories, if you would like a description of a particular parish. As an aside, many historical directories for England and Wales are freely available at the University of Leicester.

It took me some time to work out the structure of the book, as I’m not a great one for reading introductions and instructions in the first instance. It’s helpful, therefore, to take time to read the preface and the appendices so you know what you’re looking at. The maps are in alphabetical order of county name, so Bedfordshire comes first and Yorkshire last. This is useful to know since page numbers are only included on the first page of each county. I presume this is to reduce any potential confusion with map reference numbers.

I looked at my home county of Derbyshire as a way of understanding how the maps were organised. In all counties, the parish boundaries date from c1830, but the places named on the maps usually are of a later date. In Derbyshire’s case they date from 1871-1900. There is an index of the placenames for each county together with a map reference. Derbyshire only has 15 maps; Lancashire on the other hand has 25. Swadlincote, my home town, is indexed as Swadlincote, tp CHURCH GRESLEY 14.60. This translates into Swadlincote being a township (tp) in the parish of Church Gresley, located on map 14, grid 60. The maps show the boundaries of each parish and county. This is relevant for me as the majority of my paternal ancestors lived adjacent to county boundaries; their records are often found across the border in counties such as Nottinghamshire, Leicestershire and Staffordshire. The level of detail on each map is excellent as there are names of farms, manor houses, and other significant buildings or items of note.

If I look at the description of Swadlincote on GENUKI which is taken from Pigot and Co’s Commercial Directory for Derbyshire, 1835, there are a number of places of note in the district, which should show up on an 1830s map, such as the rail line and canal, various churches, collieries, pottery works. See http://www.genuki.org.uk/big/eng/DBY/Swadlincote. Due to copyright reasons, I’m unable to provide a copy of the relevant map from the Parish Atlas in this blog post without permission, but a visual image, together with a written description all help to place the lives of your ancestors in context.

“SWADLINCOTE is a hamlet, in the parish of Church Gresley, about half a mile therefrom, and partakes with that place in the prosperity derived from the pottery works and mining operations, which, together, afford employment to many hands. A new rail-road has been laid down, from the colliery of C. Granville, Esq., to join the Ashby-de-la-Zouch canal, at Moira; and a bill has been laid before parliament, for its sanction to a new road from hence, to communicate with the bridge now erecting at Walton-upon-Trent, which, when effected, will materially shorten the distance between this improving manufacturing district and those in Staffordshire. The Wesleyan methodists have a chapel here. The population of the hamlet, in 1831, was 645.”

The Atlas includes separate inset maps for major towns and cities where the parishes cover a smaller geographical area but have a larger population. The maps for London are large scale and are terrific; you can clearly see how churches proliferated, but do bear in mind that much of what we now know as London was Middlesex in the 1830s.

The maps are in black and white; one of the appendices sets out the author’s use of specific fonts and font sizes to explain the features of the maps. Another appendix lists the abbreviations used throughout. There is no general index, placenames are indexed with the maps for each county. The author explains that a general index was too massive a task at the time of publication, but this may come later. The Atlas is specifically for England.

A benefit of this Atlas comes when you cannot find records relating to your ancestors in one parish – the adjoining parishes are clearly marked. Also, I did not realise that there were so many ‘detached’ parts of parishes, which can also help in determining where your ancestors’ records may be found. If you want an overall picture of parishes within a county, this would of necessity be on a much smaller scale. For this, I’d suggest looking at Phillimore’s Atlas, the maps available on The Genealogist subscription site or those on FamilySearch. We have an early edition of Phillimore’s on the shelves at GSQ (UK/905/003) and a subscription to The Genealogist.

This is a hefty tome, with an incredible amount of detail. I would recommend those with pre-1837 English research to take the time to review it as the maps may help you to piece together the place of origin of your ancestors.