I have read many books in my search for information about my ancestors and the history of the times in which they lived. However, there are some that stand out and that I have found myself referring to again and again.  Here are 5 of those books.

We Should Have Listened to Grandma – Women and Family History by Noeline Kyle. Allen & Unwin, Sydney, 1988. 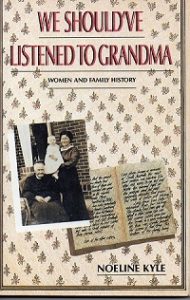 This book was written in 1988 and given to me by my sister as a gift in the same year. Noeline Kyle worked with my sister and has written an inscription to me in the cover of the book.

In 1988, I was only just beginning to show an interest in my family history and it would be another 20 years before I had the time to start any serious research.

However, when I received this book I read it with great interest and the seed was sown to investigate and write the history of my female ancestors.

This book acknowledges the difficulty in tracing many of our female ancestors, and it gives the reasons why these difficulties exist but it provides sources and techniques for overcoming them. It gives practical guides on where to look for our female ancestors in both public and private records.

Of course, in 1988, the internet and the wealth of family research resources were not available as they are today. However, this book is still very relevant and is written for both beginning and experienced researchers.

Browsing through this book from time to time renews my resolve to continue with my research into the lives of my female ancestors. It reinforces what a rich picture of life can be painted when women’s histories are uncovered. It also reminds me of how important it is to talk to elderly relatives about their life and experiences and to record this information.

I found this a beautifully written book. The descriptions of the landscape, the people and their lifestyles are so vivid that I could see it all clearly before me as I read the text. The history of this region is very important to me because my early ancestors settled in that area and many of their descendants have stayed. This is the area where I grew up.

The book begins with a description of the discovery of the Richmond River in 1828. It then describes the opening up and settlement of the district, firstly by the squatters with their sheep and cattle, then by the timber getters and finally by the farmers when the land was opened up to Selectors in the 1860’s. The author includes the history of the Clarence river in this book because she says that the Richmond and Clarence river valleys were inseparable in the early years of development.

The book comprehensively covers the industries that developed in this vast area and the many thriving towns that developed around these industries: industries such as boat building, the timber industry, sheep and cattle, the tallow industry, then sugar cane farming, general farming and dairy farming. The author outlines the discovery of gold in the area in the 1850’s. Another important aspect of the book is the author’s references to the Aboriginal communities in the area. She writes about the first contact between the settlers and the Aboriginal people of the area and then throughout the book discusses topics such as the relationships, (both friendly and otherwise) that developed, massacres that occurred, protection and reform and the valuable work Aboriginal people carried out as station hands in the development of the area.

This book is an interesting and very detailed account of the first 67 years of white settlement in the history of the Richmond and Clarence river district.

The author is an economic historian and his primary focus on the topic is from the economic – historical aspect but he also uses the disciplines of the historical demographer and the folklorist. In addition, he places a strong emphasis on the comparison between the Irish famine and modern famines such as some of the great African famines of the 20th Century. From this comparison, the author concludes that the Irish famine was indeed one of the “great famines” in history.

This is a very scholarly and detailed book. There are 7 chapters and the names of each chapter indicate the depth of information within the book:

The book also has many graphs, charts and tables.

I found this book extremely informative and helpful in understanding the causes of the famine and its devastating consequences. However, the greatest appeal for me in the book is the insight I gained into the everyday lives of the people before, during and for many years after the famine.

Barefoot and Pregnant –  Irish Famine Orphans in Australia vol 2, Documents and register compiled and introduced by Trevor McClaughlin. Published by The Genealogical Society of Victoria. Year of print not specified.

This book is a study of the 4000 or so young women and girls who were selected, from Irish workhouses,  to come to  Australia between 1848 and 1850 under the “Earl Grey Scheme”. The author says in his preface to the book that this book is for those readers who are interested in Irish-Australian studies, Australian women’s history and for people interested in the Great Irish Famine. However, he says, the main audience will be family historians who have an Irish female orphan as one of their ancestors. I am one such person and have found this book a wealth of information.

The first section of this book consists of a collection of documents. These documents include official reports and letters between the relevant authorities regarding the setting up of the Earl Grey Scheme. There are many newspaper reports from both Irish and Australian newspapers giving information and editorials about public opinion to the scheme. Also included are records of the voyages, reports on the enquiries into the Scheme and detailed accounts of some of the orphan’s experiences. Reading these documents gives understanding about the historical background of the Scheme and the prevailing sentiments at the time. Feelings in Australia against the orphans were particularly harsh.

The second half of McClaughlin’s book lists the vessels that sailed to Australia under the Scheme and the names of the orphans on each ship, together with her age, native place, parent’s names and religion. In addition, there may well be a wealth of other information about an individual orphan if a descendant of hers has carried out further research. This information may include the name of the workhouse that she came from, the type of correspondence, pertaining to her, that may be held in public records in Ireland and Australia, who she may have worked for upon arrival in Australia and her marriage and death details. Some of the orphans have a lot of additional information and others have very little or none at all.

This book enabled me to trace one of my very elusive female ancestors and to bring to life the plight of these poor orphan girls.

A Genealogist’s Guide to Discovering Your Irish Ancestors – How to find and record your unique heritage by Dwight A. Radford and Kyle J. Betil. Published by Betterway Books, Cincinnati, Ohio, 2001.

This is a truly comprehensive guide to tracing your Irish ancestors. As a beginner to Irish research I found it invaluable. Particularly helpful was the chapter devoted to Administrative Divisions and Place Names. This can be a very complex area for Irish family historians and understanding the system of land divisions can go a long way towards discovering your Irish ancestors. This chapter defines and explains provinces and nations, counties, civil parishes, church parishes, dioceses, baronies, Poor Law Unions, Superintendent Registrar’s Districts, electoral divisions, cities and towns, townlands and townland sub-denominations.

Many of the other chapters in the book discuss information sources. There are chapters on where to find records in countries where Irish immigrants might have settled. The countries  listed are Australia, United States, Canada, New Zealand, Great Britain and the British West Indies. The authors make the comment that Australia has “many excellent records and admirable indexing projects”. There are also chapters on cemetery records, church records, censuses and name lists, civil registration, emigration lists, estate records, heritage centres, taxation records, wills and administrations and many more. Each of these chapters advises on how to locate and find records and how to interpret and effectively use the information in your research.

It is a commonly held view that Irish ancestors are difficult to trace due to the complexities of administrative divisions and Irish place names as well as the lack of records prior to 1820 for many of the Irish population. However, this book gives enough information to enable the researcher to trace their ancestor back to the late eighteenth century. The authors also offer the tantalising idea that methodical Irish research offers the possibility of visiting the exact home site where your ancestor lived. 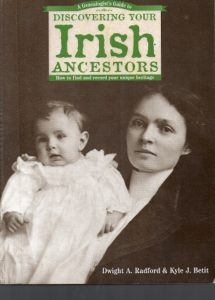 There are many more books that I could add to this list and maybe I will write about them some other time. However, at the present time these are my favourites and I gain great comfort by having them in my library.