My mother wanted to die at home.  As a family we were able to fulfill this final wish. Before she died there were many opportunities to talk to her about her life. In her own words she described her journey as “a life well lived.”

Her eulogy which I wrote and delivered (and Mum censored before her death) highlighted what Mum saw as the important aspects of this well lived life.

Provided below are several excerpts from her eulogy which provide insight into why she believed she had lived her life well.

Her parents were Arthur Stephen Black (1882-1972) and Dorothy Janet Black (nee Louis, 1908 -1988).  She was the second child of the marriage but the first daughter. Four other children were born subsequently although one died in his first year of birth.

As her mother was also named Dorothy, Mum became known as Betty, a derivative of her middle name.  To this day she is still referred to as Betty by her remaining sisters and brother and lifelong friends.

However, as soon as Betty left school she became known to all others as Dot. For 69 years, Mum seamlessly moved between these two personas.

She was a highly complex person.

As Betty, Mum was a wonderful, caring generous daughter to her parents. She ensured they never went without financially.  She took them on yearly holidays usually down around Coolangatta.  To finance these holidays, throughout the year Mum would rear chickens and ducks and sell them and their eggs.

In later years, my grandmother spent three days a week living with my mother and father, and four days in a retirement village.  This arrangement was flexible as Nana spent more and more time with Mum and Dad.

Through her actions Mum left a lasting legacy of how to be good daughter, a gift that has been passed on to her daughters and granddaughters.

The same can be said of her role as a sister.  Mum was also caring and generous to her siblings, helping them in whatever way she could.  Until her death she remained close to her two sisters.

Mum’s favourite memories of her childhood were of the years the family spent at Deception Bay during the late 1930’s and early 1940’s.  As WW2 loomed, my grandfather sent his family there to get them away from Brisbane.

The Bay then a small village in the bush was a paradise for the children.  It was here that Mum developed her love of tennis and fishing. Tennis played a large part in Mum’s life.  As a youngster, she played both competitive and social tournaments in country towns in SE Queensland.

It was through tennis, that my mother aged 16 meet her beloved Neville, our father. They belonged to the same tennis club.

Mum was a loyal, faithful wife to Neville.  Theirs was a true love story.  They were devoted to each other.  They were a team in everything they did.  Dad was a gentle soul with the occasional streak of steel while Mum was the driver and enforcer.  She stood by Dad no matter what; she worked beside him building up businesses, she encouraged him when things got difficult, bossed him around on occasions but did it with all her love and support. 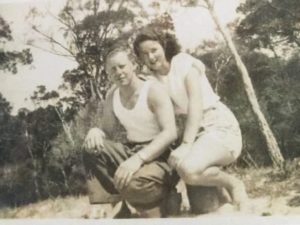 Mum, Dot Frankel with her beloved Neville soon after they met

For us three children (myself, sister and brother) Mum was Mum.  She was a strict disciplinarian but scrupulously fair.  She was of a generation that were proud of their children but didn’t tell them; she was always there if you needed help although you had to put up with her chiding; and she could drive you to distraction but you knew at the end of the day that Mum was always there for you.

Mum was a grandmother to eight and great grandmother to nine children. She and Dad were a team when it came to the grandchildren.  Mum was the disciplinarian who ensured that everyone was fed (not always to their liking), had clean clothes and kept the house tidy.  Dad was the “fun guy” who took them surfing and swimming and gave them ice cream while Mum was asleep.

One constant love throughout Mum’s life was religion.  She was a devoted, pious Christian who lived her life according to the Bible.  Although born a Roman Catholic,  Mum became disillusioned with the Church to such an extent that in her late 20s she became a born again Baptist.  For the next nearly 60 years Mum adhered strictly to the teachings of the Baptist Church.  She loved all the different roles she undertook in the church during this long period of service. She particularly loved being involved in the Girls Brigade. It gave her great satisfaction to see the girls develop spiritually.

Mum loved travelling. This was a love that both she and Dad shared.  They traveled around Queensland, Australia and overseas. A couple of times a year, Dad would get out the maps and then they would be off exploring.  Even after Dad’s death, Mum continued to travel.  It was only in her 80s that she decided she would no longer be able to travel overseas.

When writing Mum’s eulogy, I had included wording from Frank Sinatra’s song, “I did it my way”.

At the time, when reading what I was going to say, Mum told me that I had to delete this wording as it was disrespectful to God.

However, as I had done over numerous years, I ignored her.

Mum, you certainly did it your way in this well lived life.