A tiny group gathered at the burial ground in Sydney on 14 November 1792. Jane Izzy/Ezzy, and her two-year old son James were there on that summer day to bury ten-month old Louisa, Jane’s daughter. Perhaps Louisa’s father William could join them as some convicts off the Royal Admiral disembarked in Sydney before the remainder were sent to Parramatta. Newly married fellow convict and Londoner Benjamin Carver may have been able to join them as William Izzy/Ezzy had witnessed his marriage to Sarah Dibbs four days earlier. 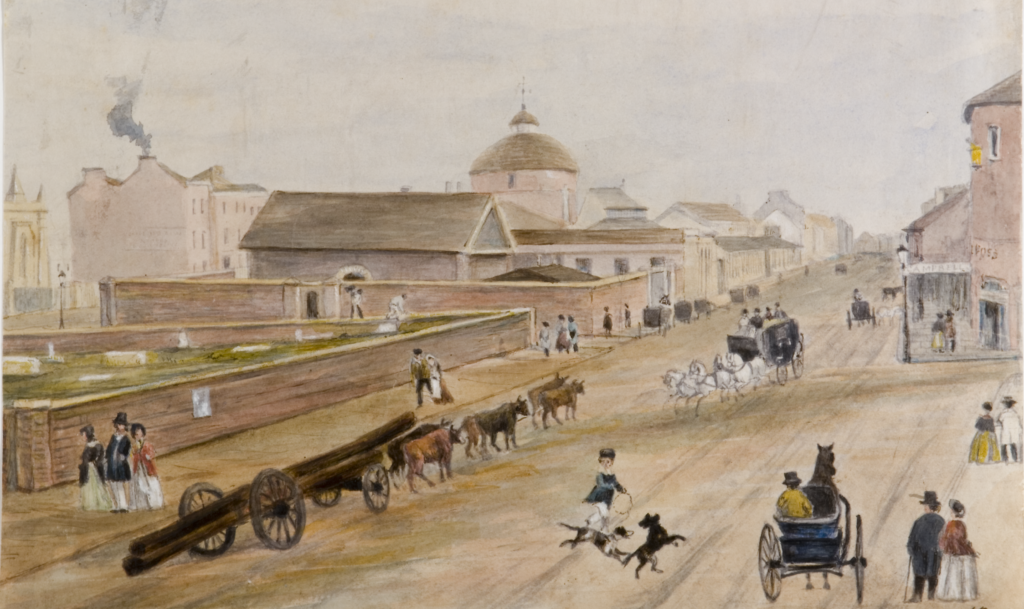 This 1842 image of the desolate Old Sydney Burial Ground gives no indication of the offensive smells arising after years of neglect.

The Old Sydney Burial Ground, under the modern-day Sydney Town Hall, was an almost empty area on that day, Louisa’s being just the nineteenth burial there. Governor Philip had chosen the site in September as the first burial ground for the colonists. As the two acres were filled with graves in the next 17 years the Devonshire Street burial ground, now the site of Central Railway Station, replaced it. The old burial ground on Druitt and George Streets was neglected.[1] While graves were desecrated, Louisa’s tiny grave was likely unmarked and completely forgotten.

Louisa had spent almost half of her short life on board the Royal Admiral. Although the voyage was comparatively quick at 20 weeks, fever was rampant on board among passengers, free and convict alike. Seventy-two men, eleven women and five children were sick when they disembarked in Sydney Cove. Louisa Ezzy was likely to be one of the five children. She was baptised in Sydney within the week after her arrival.[2] Her mother, Jane had not managed to organise her baptism in London during the five months she was making the significant life decision to accompany her convicted husband and to find a place on the same ship as he was allocated.

Who were the other children on the Royal Admiral?

Sisters Ann and Sarah Vales were buried in the Old Burial Ground within four months of disembarking. Their father, convict Nicholas Viles/Vales may have also been among the ill on disembarkation as he died in December 1792. Baby Eleanor Springate was also buried there, possibly with her mother Mary, also a convict, who had died soon after her daughter’s birth on board, while the Royal Admiral was docked in Sydney. Eleanor lived just nine days. The four girls had either become ill on board or soon after as they endured the summer days in Sydney Cove.[3]

The story of another baby girl, born to Priscilla Loveridge, is unknown. While the baby girl was baptised on board by Captain Bond three weeks before the arrival in Sydney Cove, there is no record in the ship’s log of her name or her death on board. While records for Priscilla exist in both New South Wales and Tasmania, none have been located for her daughter.

Two other babies born on board in September died on board and were buried at sea. They were a stillborn baby born to Elizabeth Matthews, and also David Thomas at 19 days old. David’s mother, Elizabeth Thomas died giving birth to him so was buried at sea. The status of their mothers is unknown, but it appears their fathers may have been convicts also on board.

At least eight children who sailed on the Royal Admiral survived the voyage and the first four months after their arrival. Few details about the future of the six children of free settlers have been located.

Among these were John(son) and Philip Jamieson, sons of John Jamieson who, on his arrival, was appointed Superintendent of Convicts on Norfolk Island. Some family members remained in Australia, but this may not have been the older sons, Johnson and Phillip.

Mary Peat was the daughter of William Peat, engaged as a master carpenter for the colony. Mary’s mother, Phoebe Peat gave birth to a son, William in early December. Both mother and son died in Parramatta a month later. Mary survived to marry Lawrence Brady in 1803; in 1828, she was a seamstress with four surviving children.

Perhaps just two of the nine children with at least one convict parent survived beyond the summer of 1792-93. Charlotte Loveridge was one of these. She was born on board and left the ship with her mother Mary, convicted with her sister, Priscilla. Charlotte bore children in New South Wales and in Tasmania where she died in 1858.

The other was Louisa Ezzy’s brother William who, if he suffered from fever, recovered to accompany his parents to the Hawkesbury several years later.

Locating as much information as has been possible so far about all the children on board the Royal Admiral has added to my understanding of the arrival of my ancestral family, the Ezzys. It also adds another acknowledgement of Louisa’s short life to that provided by descendants in the form of a plaque.