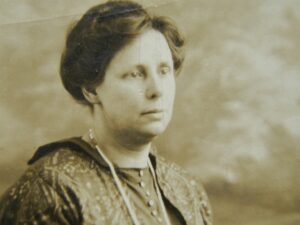 The story of Evelyn Rose Boulton (nee Sturgeon), my great grandmother, and the puzzle of her claims to French heritage, has taken another turn. Previous readers of this blog might recall Rose and the Frenchman, and my search for the illusive facts of this family story.

Old scribbled notes taken during a phone interview with an Aunt list the tantalising words, “escaped the French revolution.” Rose’s Foulger and Sturgeon ancestors in Suffolk were mostly agricultural labourers firmly entrenched in the local area. In the 1901 Census, I found a Frenchman living in the house where Rose was in service in Hampshire, but although he had a fascinating life, was not a relative.

Myth debunked. Or so I thought. A fascinating GSQ presentation at one of our Wednesday Zoom talks led me back to my Welsh family. In 1908 Evelyn Rose married Welsh coal miner George Boulton in Rose’s village of Great Barton in Suffolk, and they lived in New Tredegar in Wales. Multiple sources agree that George’s grandfather was Edward Bouton (note the different spelling). The parish register for 1811 in Llanbedr, Painscastle, Radnorshire, Wales reads, “Edward, son to Esau and Catherine Bouton Bap Apr 28th.” (FindMyPast) Edward goes on to be known by Bolton, Boughton and Boulton. Does Boulton come from Bouton which sounds French? 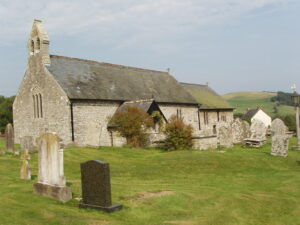 The earliest record for Esau (sometimes spelled Esaias) is his marriage to Catherine Jones in 1808 in Cusop, Herefordshire, where his name is Boulton. This is a Familysearch record of a Bishop’s Transcription. The name on the film is clearly written as Boulton. There is only one burial for Esau Boulton in Wales at Clirow (Welsh spelling, Clyro) dated 14 March 1817 aged 26. This gives an approximate birth year of 1791, two years into the French Revolution. Perhaps his parents were French refugees?

Another line of research gives birth years for Esau of 1772 and Catherine 1774, which is the perfect age for a young man escaping to England, but Catherine would have been 34 when they married.

Edward married twice, his second marriage in 1860 with a certificate giving his father as Esau, a labourer, and a surname of Bolton. On this certificate he has signed with a cross. His inability to write explains the different spellings of his surname. On the birth entry for his son Samuel, my 2nd great grandfather, born in 1847, his name is Boughton. The Boutons/Boultons remained in the Wales/England border area, moving between Radnorshire and Herefordshire until the 1870s and sometimes the border shifted around them. 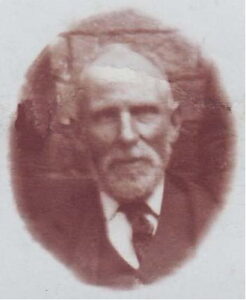 Portrait of Samuel Boulton in 1847.

Such an itinerant lifestyle, is in line with Esau’s occupation as a labourer. Perhaps his French heritage added to the family’s difficulty, the French in Britain at the time being treated with much suspicion. In 1792 thousands of emigrants fled the turmoil in France, many ending up in the south and southwest of England. Such were the English suspicions of the French and the fear of revolution breaking out in England, that in 1793 the Aliens Act was passed to document the foreigners streaming into the country.

The only other records for Esau Bouton, around that time, sometimes with the spelling Boughton, are in Norfolk, and they don’t seem connected. Esau Bouton in Wales and Herefordshire just appears out of nowhere. Could he or his parents have arrived into a Bristol Channel port from France and wandered into the countryside looking for work?

Can the origins of the surnames help with the puzzle? Various searches revealed two possible origins, one French, one English. Bouton is a French name originating in Burgundy, in the 14th century, the most well-known being Count Nicholas Bouton (1598-1662), whose son was supposedly the origin of all Boutons in America. This is disputed by more recent genealogists. Boughton is an old Saxon name derived from a place of residence of the same name.

It’s all in the pronunciation, and the ear of the English vicar tasked with writing it down. Bouton could be “Bow-tun”, “Boo-tun” or “Boo-ton” as could Boughton. You’d think they’d hear the “l’ in Boulton, but say it quickly and it disappears.

Searching for the origin or surnames reveals some fascinating information. Forebears https://forebears.io/surnames tells me that Bouton is the 49,850th most common surname in the world and is most prevalent in France.

FindMyPast https://www.findmypast.co.uk/surname/ also has surname data, such as the earliest date of record with that name and the number of records where it occurs. Further information drawn from the 1901, 1911 censuses and World War 1 is available.

The Genealogist provides a map view of the results of a name search for British Census data. Search for a person in the record collection, “Census”. On the left-hand side, you’ll see the possible sets of results and “View a map of results”. In 1841 there were 16 occurrences of Bouton in Herefordshire and 5 in Radnorshire.

Although Bouton is more likely a French name, it has been in England since at least 1552. Ancestry lists one entry in Herefordshire for George Bouton, born 1716.

And what about Esau? It’s from a Hebrew word meaning “hairy” and has been in use since the 17th Century. Today the most common occurrences are in Mexico and Tonga. On FindmyPast there are 73,942 records of Esau (with no name variants), 46,943 of them in England. I have found Esau used as a first name in French records.

Rose’s story of French origins could have come from her husband’s family. The names and dates make it possible, but the mystery remains. Where did Rose get the story? Samuel Boulton died before his son George married Rose, but Rose’s mother-in-law lived nearby. Perhaps in the many hours the families spent together, as evidenced by the remaining photographs, Silvia passed the story on to Rose.

Bouton, Bowton, Boughton, Bolton, Boulton. It’s all French to me. At least I hope so!